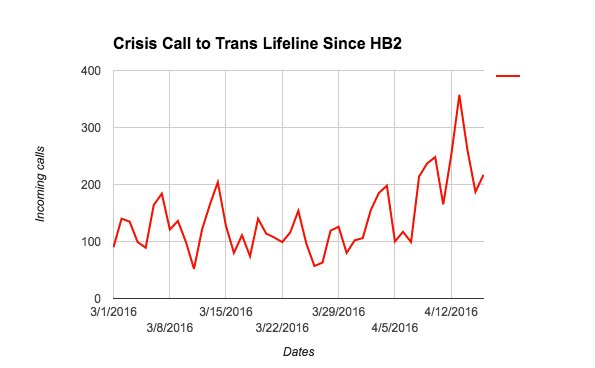 “If I had to guess what’s being impacted I think [it’s] probably people’s hope for the future.”

—Greta Gustava Martela, co-founder of Trans Lifeline, a hotline for transgender people in crisis, speaking with The Daily Beast about a spike in calls in the wake of North Carolina’s recent anti-trans law.

HB 2 forces transgender people to use a restroom that matches their birth gender. The bill has been heavily criticized by both the business community and trans activists and their allies. Martela said that calls to Trans Lifeline have “nearly doubled” since the law was passed.

“This would normally be a time of year when we would be on an upswing,” Martela said, as spring normally coincides with an increase in suicide rates, but the severity of the increase in the past couple of weeks is “indicative of some event happening, rather than the normal seasonal fluctuations.”

Prior to HB 2 being signed into law on March 23, Trans Lifeline’s daily calls peaked at around 200. Following the law, a steep rise can be noted, with April 13 bringing an “unprecedented” 357 calls.

Donald Trump supports trans bathroom access: “Leave it the way it is”

Target: Transgender customers can use whichever restroom they choose