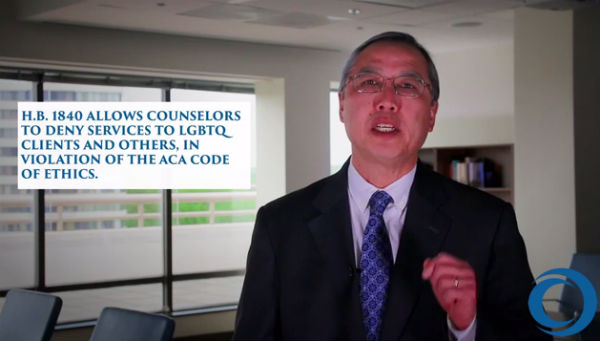 The largest counseling association in the world has announced it has canceled its 2017 conference scheduled for Nashville in response to Tennessee’s recently passed counseling exemption bill that allows therapists and counselors to refuse to treat LGBT clients or others with whose behavior they disagree by citing “sincerely held principles.”

Richard Yep, the CEO of the American Counseling Association (ACA), released a video statement on Tuesday explaining the decision.

“Of all the state legislation impacting counseling during my 30 years with ACA, the new Tennessee law based on Senate Bill 1556/House Bill 1840 is the worst,” Yep says in the video. “Tennessee became the latest state to introduce a discriminatory religious freedom law, which targets gay, lesbian, bisexual and transgender Americans, and then went further by expanding the allowed discriminatory practice to even more groups of citizens.”

Yep also pointed out that the new law, set to go into effect on July 1, allows therapists and counselors to refuse to treat clients, in violation of the ACA’s code of ethics.

“We are fighting to make sure laws like this do not become the national standard, and counselors who unethically refuse services to clients in need will be held accountable,” Yep adds. “ACA’s 2017 annual conference is scheduled to convene in Nashville. If the new law is allowed to stand, we cannot, in good conscience, bring business to Tennessee. It is an affront to our profession, and we must stand firm to prevent other states from enacting a law like HB 1840.”

The ACA had previously indicated that it might pull its conference from Nashville after the Gov. Bill Haslam (R) signed the counseling bill into law. Butch Spyridon, president of the Nashville Convention & Visitors Corp., told Metro Weekly last month that it was one of the few cancellations or boycotts that might come to fruition. Most others, he said, stopped after another bill restricting transgender students’ access to public restrooms, was defeated.

Watch the ACA’s video statement below: