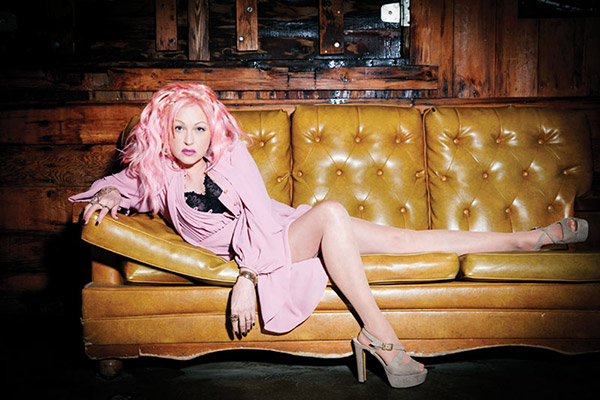 Few singers from the ’80s have as much goodwill directed towards them as Cyndi Lauper. When she first burst onto the music scene, sashaying her wares on the streets of New York in the music video to “Girls Just Want To Have Fun,” it heralded the start of a new, untamed and uncensored pop star expression. That she would spend the remainder of her career often struggling to find that same vitality again has proved to be the biggest obstacle in repeating her first album’s enormous success.

Whether Lauper’s records subsequently became increasingly weighed down by record label interference or not, the one thing that has remained unsuppressable has been her multi-octave belter of a voice. And here on Detours (

), it is exactly that voice she is reliant upon in order to inject life into what is a no more, no less approach to an interesting concept: a country music covers album. Lauper rarely conquers her material with the same relish as the original recordings of “Girls Just Want To Have Fun,” “Money Changes Everything” and even Prince’s “When You Were Mine,” making the album sound like no one else wanted a go at a half empty karaoke bar.

It doesn’t help that “Tunnel of Love” is a rough start. Possibly mistaking a song’s ubiquity for accessibility, that it sounds synthetic and functional is a waste of an exciting premise. Lauper is in dependably confident vocal form, but inserting her vintage hiccups into the mix (something she utilized on her first album, yet has rarely reproduced since) highlights her struggle to make the material her own.

If Lauper is rather rootless in the genre, she finds better footing on some of the duets that help connect the mix and match of country with her preppier quirks. “Detour,” featuring Emmylou Harris, is one such example. Matching the cut-glass beauty of Harris, Lauper is in spirited form and the song strangely recalls her own self-written intro from her album A Night To Remember. Equally unassuming, “Night Life,” featuring Willie Nelson, is a shoe-gazing, shoulder-shrugging number, with an arrangement giving these two old pros plenty of room to have a ball together, whether they recorded it in the same room or not. It is a rare moment on the album, finding an after-hours groove that rings true.

“Detour lacks any true direction. This stop-gap album is uniformly pleasant, but it is also rather pedestrian and predictable.”

As on all Lauper’s albums, she truly knows how to make sure her ballads hit the spot. “Misty Blue” is ravishingly, heartbreakingly lovely. A steamy torch ballad with an air of rhythm and blues, here she sounds much more natural and self-assured. This is Lauper at her best, where she can bridge the gap between the teary eyed balladeer who gave us “Time After Time” and the aching seduction found on her sadly neglected ’90s albums Hat Full of Stars and Sisters of Avalon. Off-key, but on form, “The End of the World” conveys the kind of brittle fragility that made her own songs, such as “Heading for the Moon” and “True Colors,” so starkly pretty and emotional. The beautifully wrought “Hard Candy Christmas,” featuring Alison Krauss, significantly adds to the limited appeal of the album, with the biggest pathos of all being that the rest of the record can’t equal its sweetness.

The plodding “Walkin’ After Midnight” falls flattest of all. In order to inhabit these songs to the fullest, choosing such a predictable arrangement simply sounds sterile in the inevitable comparison with the original. “Heartache by the Number” compliments her reverberating vocal throttle more effectively, but, once again, musically this is a polished yet faceless affair. “I Want to Be a Cowboy’s Sweetheart” was originally a hit in the 1930s and sounds more like a skit. That Lauper doesn’t let out a “yee-ha!” is remarkable given we are made to endure a lassoed-Jewel yodelling.

Far from a completely pointless diversion, Detour simply lacks any true direction. This stop-gap album is uniformly pleasant, but it is also rather pedestrian and predictable. Songs such as “I Fall to Pieces,” “You’re the Reason Our Kids Are Ugly” and “Tunnel of Love” are all flat readings, never showing the dynamic spark Lauper has made her name with in either delivery or arrangement. There’s little here to remind us that she is one of pop’s great charismatic and interpretive talents. Instead, in an effort to be country and swing some of the classics, she forgot to be herself. An all-covers country album certainly wasn’t a bad idea, but Lauper sure has picked some rather big cowboy boots to fill.

Detour is available Friday, May 6 through streaming, download, and here at Amazon.com.