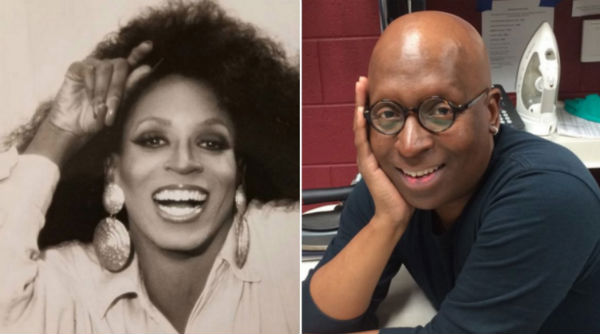 Vox was the onstage persona of Vincent Hill, a respected makeup artist and hairstylist who worked for Arena Stage as the theater’s wig, hair and makeup supervisor. Following news of Hill’s death, the entertainer’s Facebook page was flooded with posts expressing sadness at the loss of a beloved friend.

Arena posted news of Hill’s death on its official Facebook page, writing, “Our hearts are saddened by the passing of our dear friend Vincent A. Hill…. His kindness, caring and talent as an artist and performer will be remembered and missed by his Arena Stage family. Our love and sincerest condolences go out to his family and his loved ones.”

“This little boy came through the crowd, and I think they had a talent show, as I recall, and he was doing Diana Ross,” says Robinson. “I went, ‘Oh my God, who is that?!’ I’d only been doing drag for about five years at the time. But I grabbed him and mentored him, and adopted him as my [drag] daughter. Because I was in the Academy, and that was the tradition. You had drag kids, and someone taught you, and so on.

“He started doing drag, and maybe a year or so after he got into the cycle, I introduced him, and his best friend at the time, Sparkle LaBelle, to the Washington Academy,” Robinson says. “And they just blossomed overnight, because they were really before their generation, you know, into the fashion and the rhinestones of drag, and all that stuff.”

Hill would later join Robinson at Ziegfeld’s, where he became a popular entertainer in his own right, winning Miss Gay D.C., in 1988, and Miss Ziegfeld’s in 1992.

As Vicki Voxx, Hill was very fashionable and always well-coiffed — hair and makeup was a specialty. He could be upfront, but was also sweet, loving, quiet and shy. “She was very to the point,” says Robinson. “There were no walls there. She called it like she saw it. She was a sweet individual, fun-loving, creative, all that. It’s kind of hard to believe that child is gone.”

Robinson last saw Hill five months ago, when the two had a 15-minute long chat to catch up. Hill’s death came as a shock, because he had appeared to be in good health and good spirits, according to Robinson. But Robinson also was aware that Hill had previously battled serious health problems.

Aaron Myers met Hill seven years ago through a mutual friend. A local jazz musician who sometimes travels for work, Myers stayed in touch with Hill frequently. The two lived near each other in Washington, and would ride the Green Line together on the Metro to go to work. Hill would attend Myers’ shows when he was performing in Washington, and Myers would go to shows at Arena Stage, where Hill was working behind the scenes as a makeup artist.

“If I ran into him during the day, I kind of just knew, ‘This day is going to be Vincent,'” says Myers. “He wasn’t demanding, he didn’t try to take over anything. He was just somebody you wanted to be around. It’s not often that you meet people like that. And when you do meet them, hold onto them for dear life. When you look on Facebook at all the tributes, it makes one feel a little selfish, because you don’t think there’s any way possible that someone could have such a loving, intimate relationship with so many people. It’s amazing that he was able to affect so many people in the same way that he touched me. It lets me know that there are a few of us who are capable of love like that. Vincent was one of those people. We were lucky to know him.”

Myers visited Hill in the hospital just prior to his passing, where Hill said he was not afraid of dying. He adds that it’s going to be a “weird world” without Hill in his life.

“He was really a light,” Myers says. “Sometimes, when you meet people, you’re trying to feel them out, and think, ‘How can I connect with this person?’ It seems like that process was immediately erased when you met Vincent. You’d feel like you’d known him for 20 years upon first meeting. He was really selfless, in many ways, and one of the few friends, that, when they say they care about you, you knew he’d really mean it.”

John Riley is the local news reporter for Metro Weekly. He can be reached at jriley@metroweekly.com
← Previous Story Bowser signs youth suicide prevention bill into law
Next Story → Cuccinelli says he won’t run for Virginia governor in 2017