One bill asks for a religious accommodation for restrooms, and another calls for Obama's impeachment 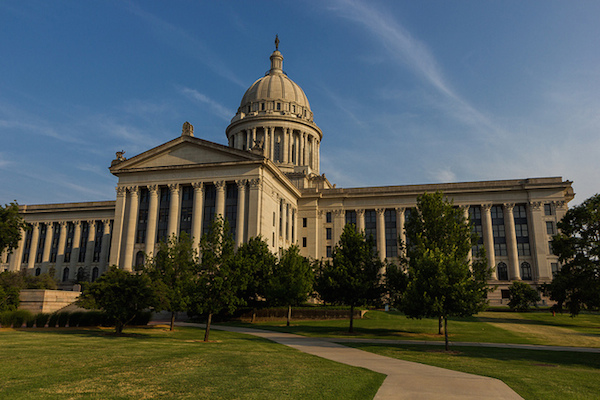 An Oklahoma Senate committee has moved forward with a bill that would require schools to grant religious accommodations to students who object to sharing restroom, shower or changing facilities with transgender students.

The bill, introduced in response to the Obama administration’s guidance calling on school districts to, among other things, allow transgender children to use facilities that align with their gender identity, was passed by a joint committee on a 20-15 vote, thus allowing leadership to bring it to the floor this week.

But the bill adds a provision that would encourage discrimination against transgender people, where offering a single-occupancy restroom or facility to a student who asks for the exemption shall not be “considered an appropriate religious accommodation.” Because the bill does not require construction of additional facilities at schools, that means that, in practice, there would likely be one set of bathrooms set up for every student, including transgender children, and a separate bathroom or facility for cisgender students only.

Supporters of the measure insist it is necessary to protect children from being exposed to people of the opposite biological sex in areas where there is ful or partial nudity. They also claim that allowing transgender people to use the bathroom of the sex opposite their assigned sex at birth will endanger children by making it easier for predators to enter restrooms or changing facilities by claiming to be transgender.

Sen. Anthony Sykes (R-Moore), a cosponsor of the bill, says it is necessary to provide an accommodation for those whose religion opposes homosexuality and transgenderism. He has also accused the federal government of intruding into individual schools’ policies.

“The federal government  not only wants to tell us what to do in education, in our schools, but in our bathrooms, locker rooms and changing rooms,” he told The New York Times. “People tell me they want to push back against the Obama administration.”

Sykes is also the Senate author of a second bill, a joint resolution which specifically targets the Obama administration for overstepping its constitutional authority. That resolution calls upon Oklahoma’s elected representatives in Congress to file articles of impeachment against President Obama, Attorney General Loretta Lynch, Education Secretary John King and “any other federal official liable to impeachment who has exceeded his or her constitutional authority.”

But it’s unclear whether the measure will have enough votes to pass, even in the Republican-dominated legislature. Earlier this year, the legislature failed to take action on 27 different bills that sought to condone some type of discrimination against LGBT Oklahomans. Some lawmakers also say their attention should be placed on more pressing priorities, such as dealing with Oklahoma’s looming budget crisis.

That sentiment was echoed by opponents of the bill, including the ACLU of Oklahoma, which called the bills’ aims “disappointing and unconscionable.”

“This hateful assault on some of Oklahoma’s most vulnerable residents is nothing more than a thinly veiled attempt to divert attention away from Oklahoma’s budget crisis,” Ryan Kiesel, the executive director of the ACLU of Oklahoma, said in a statement. “This proposed law does nothing to protect religious liberty, but rather attempts to use religion as a weapon to discriminate. We urge lawmakers to abandon this harmful legislation and spend their time and resources addressing the true financial crisis facing Oklahoma rather than continuing to demonize our youth.”