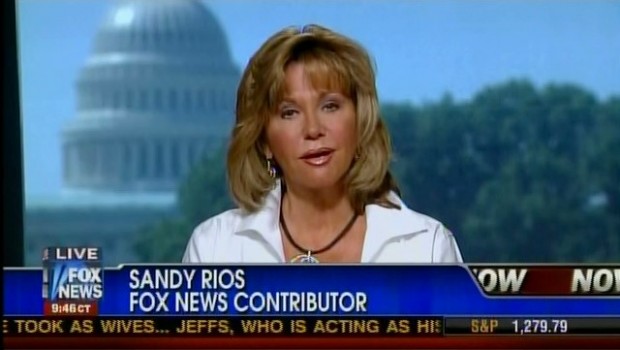 Another week, another homophobic outburst from conservative talk radio.

This time, it was the turn of American Family Association’s Sandy Rios, who told her listeners that Hillary Clinton has sex with women in order to gain LGBT endorsements. She also implied that the former Secretary of State is a lesbian, and that she embraces “sexual deviancy,” RightWingWatch reports.

Rios then told her listeners to support Donald Trump for president — presumably because her original choice, Sen. Ted Cruz, failed miserably in his bid for the nomination.

“Hillary Clinton embraces every sexual deviancy you can imagine,” Rios said. “I’ll never forget in the ’90s…[Beijing congresswomen had] a tent that you went in and they would show…lesbian lovemaking.

“Hillary Clinton was in this up to her ears,” her rambling continued. “Surely you must know, that there are more than rumors swirling about her own sexual proclivities since before she became First Lady.”

Rios continued to imply that Clinton’s sexuality is the reason she supports same-sex marriage and has received endorsements from LGBT groups.

“She’s an advocate of gay marriage, and I mean a strong advocate,” she said. “She’s been endorsed by every radical homosexual activist group in the country, all the major ones, Human Rights Campaign and others, especially in New York. She gets that endorsement for a reason, you know, she gets it for a reason.”

Rios then defended Trump, who has a mixed record on LGBT rights.

“You have a choice of [Trump] who doesn’t approve of gay marriage, that’s pretty gutsy I think,” she said. “He is not Hillary Clinton on these issues. There is a difference.”

Trump has shown support for transgender people to use the bathroom of their choice and for LGBT employment discrimination protections, but also supports nominating Supreme Court justices who would overturn same-sex marriage.