Buried within this weekend's Capital Pride Parade is a man who once led the "ex-gay" therapy movement. He has come to apologize. 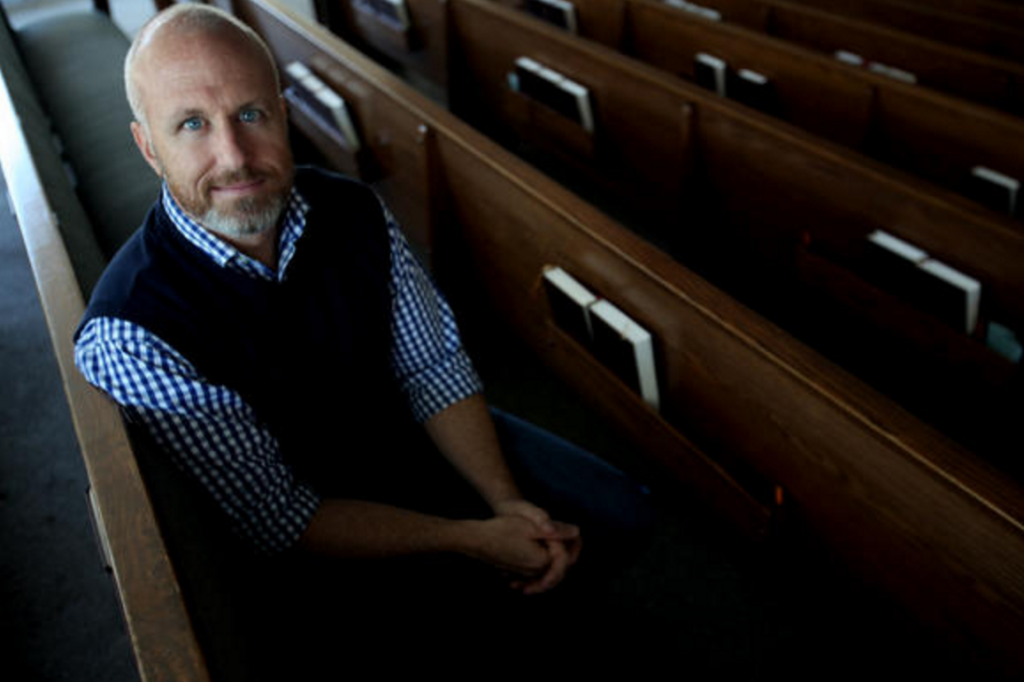 It’s a stunning admission from a man once known as the “poster boy of the ex-gay movement.” As president of Exodus International, Alan Chambers presided over an organization that coerced families and individuals into the false pretence that a person could change their sexuality. Using his own marriage to a woman as proof of his “ex-gay” status, Chambers doggedly pushed the use of reparative therapy, under the guise of religion, as a tool to combat same-sex attraction.

That he is now admitting its hopelessness — even when utilized by adults of their own free will — is a sign of the momentous transformation Chambers has undergone since shutting down the organization in 2013. He publicly announced that he still experienced same-sex attraction and set out on a national apology tour aimed toward the LGBT community.

Even more extraordinary: When President Obama called for state and federal lawmakers to end the practice of reparative therapy on minors, Chambers wrote an op-ed for Religion News Service, fully supporting the president’s position.

“The priority is banning reparative therapy for minors,” he says. “And the reason I say the priority is because they are the most vulnerable. They are the ones who don’t have a choice. When a parent or someone has recommended this course of action or that type of treatment…it creates shame, it creates a deeper sense of alienation and loneliness from who they truly are.”

Chambers is going a step further than most LGBT advocates or organizations, who have mostly focused on LGBT youth. “Should there be legislation forbidding that type of therapy for adults? Probably,” he says. At the very least, warnings about the therapy’s ineffectiveness should be made apparent from the outset. “Hopefully, people will say, ‘Oh, wow. Thanks for sharing that. I think I’m going to opt out of it.'”

Chambers’ apology was hardly well-received. He promised to use his ministry to advocate for greater inclusion of LGBT people in faith communities. But he refused to renounce his personal beliefs concerning the nature of marriage or extramarital sexual relations. Critics have pointed to that “non-apology” as evidence that Chambers’ new message is merely a shift in tone, rather than a change in underlying beliefs.

The 44-year-old’s evolution towards promoting inclusion was prompted by what he felt was a large number of LGBT people who thought they needed to discard their religion in order to find happiness.

“It broke my heart to think people felt like they had to leave their faith in order to embrace their sexuality or their sexual identity, because that’s not God.”

“One of the things I think that really was the major catalyst for me was hearing people say, ‘I’ve embraced my gay identity, and I’ve left my faith. I do not believe in God anymore,'” he says. “It broke my heart to think people felt like they had to leave their faith in order to embrace their sexuality or their sexual identity, because that’s not God.”

Chambers no longer identifies as “ex-gay,” although he still struggles with finding the right label for himself. He admits to having sex with other men prior to meeting his wife, but attests that, despite accepting his same-sex attractions and ending ex-gay therapy, he remains committed to Leslie and their marriage of 18 years.

Indeed, the couple now travels the country as a unit, sharing the story of their personal evolution on matters of sexuality with fellow conservative Christians, pro-LGBT organizations and affirming congregations. In person, Chambers comes off as someone who is sincere in his remorse, someone who genuinely wants to make penance and rebuild relationships with a community from which he has been estranged for quite some time — in no small part because of his work with Exodus.

And he has one main message for the LGBT community.

Chambers is particularly apologetic for the part he played in suppressing the rights of gay people. “I was one of those polarizing figures in the push-and-pull of the Moral Majority,” he concedes. “Certainly, the Federal Marriage Amendment and Prop 8 and all of those things that today I deeply regret being involved in.

“As the last three years have gone, [Leslie and I] have seen a tremendous opportunity to rebuild relationships that have been lost, to build new relationships that we never had before. It’s grown, and it’s changed to the point that [we] were speaking at a gay conference a couple of weeks ago, at a church in Asheville. During the music portion of the service, I just began to cry. Leslie turned to me, and she said, ‘It’s good to be with your people, isn’t it?’ I turned to her and said, ‘Well, they’re our people.’ She said, ‘You’re right, they are.'”

As the couple started traveling to various speaking engagements, they caught the attention of the Washington National Cathedral, which invited Chambers to be a guest preacher at two separate services on Sunday, June 12, the same weekend as D.C.’s Capital Pride celebrations. In between services, Chambers has agreed to be interviewed as part of the Cathedral’s Second Sunday Series, which highlights modern-day issues that are part of the Cathedral’s ministerial priorities, such as social justice or support for LGBT rights.

“Alan’s story…is much like the Christian story,” says Kevin Eckstrom, communications officer for the Cathedral and an openly gay father of twin boys. “He was on a path and had an encounter with God and with LGBT people, and, after that ‘conversion,’ if you will, his life and his work don’t look the same as it did before. He has some powerful and interesting things to say about changing your mind, changing your beliefs, changing your preconceived notions, which in a lot of ways is the same thing we talk about here, week in and week out, on Sundays.”

In extending its invitation to serve as a guest preacher, the Cathedral also offered Chambers and his wife the opportunity to march in the Capital Pride Parade with the group’s contingent on Saturday, June 11. That invitation, and the couple’s acceptance of it, would have been unimaginable three years ago.

“There aren’t many Pride weekends bigger than D.C., which makes my stomach churn just thinking about it,” says Chambers. “When Kevin called and said this was an opportunity, an invitation they were extending to me, I just thought, ‘Man, I’m not worthy of this invitation.'”

“I have been a difficult part of [a lot of people’s] journey. I don’t want to — in a time that is full of pride and joy — be a negative aspect of that.”

Chambers is apprehensive about appearing at such a public event. It’s understandable, as there are plenty of people not ready to forgive him for his involvement with Exodus. Some point to his ministry as a catalyst for the suicides of LGBT youth. Others argue that he’s failed to sufficiently apologize for the impact of his previous work, which has since been copied or adopted by other anti-LGBT organizations even after Exodus’ closure.

“I represent something that has been difficult for a lot of people,” he says. “I have been a difficult part of their journey. I don’t want to — in a time that is full of pride and joy — be a negative aspect of that.”

Not that he shies from confrontation. Whenever someone approaches him, Chambers makes sure to let them air their grievances. “As long as someone is not physical, that’s a conversation I’m very comfortable having,” he says. When someone is especially angry, Chambers will say as little as possible. “To let people express that to a live human being who represents something that was horrible for them is important and necessary,” he says. “It’s a step towards healing.”

Ultimately, he hopes that by marching in the Parade, he will draw attention to the causes he now advocates for — ending reparative therapy and opening up discussions of sexuality and faith in church groups and conservative communities. But it’s also a larger part of his continuing apology towards a community that he helped wrong for so many years.

“[Marching in the parade] is not about me — it’s so much bigger,” he says. “It’s about what can happen when you step outside of yourself, outside of your opinion and say, ‘Man, I’ve been wrong.

“Whatever it takes is what I’m going to do to make it right.'”

John Riley is the local news reporter for Metro Weekly. He can be reached at jriley@metroweekly.com
← Previous Story Record-setting 8 embassies and Washington Capitals goalie to march in Capital Pride Parade
Next Story → Capital Pride: Your Essential Guide to the Best Events