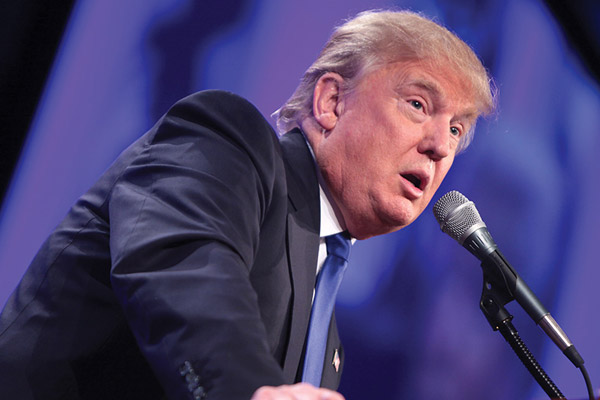 “A radical Islamic terrorist targeted the nightclub not only because he wanted to kill Americans but in order to execute gay and lesbian citizens because of their sexual orientation.”

—Donald Trump, in a speech in New Hampshire. Originally planned to deal with national security and his thoughts on a Clinton presidency, Trump instead focused on yesterday’s Orlando attacks, which left 50 dead and 53 injured at an LGBT nightclub. An earlier speech by Hillary Clinton had a similar focus.

“This is a very dark moment in America’s history,” Trump said, calling the attack an “assault on the ability of free people to live their lives, love who they want and express their identity.”

Trump repeatedly spoke to the LGBT community, telling them that Clinton would only bring them further harm should she become president.

“She can’t have it both ways,” he said. “She can’t claim to be supportive of [LGBT] communities while trying to increase the number of people coming in who want to oppress these same communities.

“Ask yourself, who is really the friend of women and the LGBT community,” he added. “Donald Trump with his actions, or Hillary Clinton with her words? Clinton wants to allow Radical Islamic terrorists to pour into our country—they enslave women, and murder gays.”

While his statements about Clinton will likely raise more than a few eyebrows, Trump has been something of a moderate (at least in Republican terms) on LGBT views this presidential cycle, opposing same-sex marriage but voicing support for trans bathroom access. However, Clinton supports both marriage equality and trans bathroom access, and has extensive LGBT policies as part of her presidential platform.

“I will tell you who the better friend is,” he said. “And someday, I believe, that will be proven out, bigly.”

Trump’s speech, which attacked President Obama, Clinton, and frequently blamed the Islamic community for Sunday’s atrocities, was littered with inaccurate statements. He called the number of Syrian refugees being accepted to the U.S. a “tremendous flow.” It’s fewer than 2,000, each of whom has gone through an extensive background check. “We’re letting hundreds of thousands of people in and it’s only making the problem worse,” he added. According to PolitiFact, the U.S. will allow just 85,000 refugees from all around the world in 2016 (that’s 0.3% of America’s population).

Trump also asserted that yesterday’s killer, Omar Mateen, had been born in Afghanistan and had emigrated with his parents. That’s false — Mateen was born in New York, Trump’s home state.

Hillary Clinton: ‘LGBT people, I have your back.’

“The only reason that the killer was in America in the first place was that we allowed his family to come here,” he said. Mateen’s family emigrated from Afghanistan three decades before he carried out his attack.

Further attacking Clinton, Trump said that she “plans to massively increase admissions without a screening plan, including a 500% increase of Syrian refugees. Tell me, how stupid is that?” The Guardian fact-checked this statement, revealing that refugees face a 12-18 month screening process, with Syrian refugees facing waits of up to two years.

Trump, though, was unconcerned with such inaccuracies during his speech — which, it should be noted, contained more references to the LGBT community that many statements from other Republicans in the wake of yesterday’s attack.

“I refuse to allow America to become a place where gay people, Christian people, Jewish people, become a target,” he said. “This is not just a national security issue, it’s a quality-of-life issue.”