Tegan and Sara: Love You to Death (review)

If anyone still doubted Tegan and Sara’s star power, they would be hard-pressed to do so now. The openly gay, Calgary-born twins were already indie royalty for years before clinching mainstream appeal with the single “Everything is Awesome,” featured in 2014’s The Lego Movie. Between a string of commercially successful releases, performances alongside the likes of Katy Perry, Lady Gaga and Taylor Swift, and continued advocacy and activism for LGBT causes, Tegan R. Quin and Sara K. Quin have given us no reason to think they’ll be slowing down anytime soon. Their latest release seems to be a sign that they plan on remaining squarely in the realm of mainstream pop, at least for now.

Love You to Death (

) marks a continuation of the Quins’ deliberate shift away from indie rock, which began with 2013’s Heartthrob. The move from guitars and pianos to synthesizers and a drum pad was nothing shocking — the pair has dabbled in pop before, after all, and similar transitions have been made by other artists. Few, though, have managed to make this transition so seamlessly and with so much payoff. In continuing their turn towards a more mainstream pop aesthetic, Tegan and Sara have sacrificed neither their artistic prowess nor their fierce individuality.

Thematically and musically, Love You to Death invites comparison with its predecessor, which featured a similarly upbeat tone and a fairly standard structure. On the surface, the album might seem formulaic, being 31 minutes of radio-friendly love songs. Where Heartthrob was jaunty and fun, almost to the point of chaos, Love You takes a more stark approach. Each of its songs is tightly focused around a single theme, all of them under four minutes in length. Tegan and Sara are efficient songwriters, however, and every track pulses with a sense of purpose. The album may be brief, but it is far from vapid. It explores virtually every point in a human relationship, from heady expectation (the triumphant “Faint of Heart”) to conflict and eventual collapse (“100x”). The synths, recalling the ’80s and ’90s, are ubiquitous, lending the album a layer of nostalgia, which works best on the tracks that look backwards on what was.

Love You to Death proves Tegan and Sara are more than capable of bringing their unique depth and talent for songwriting to a broader audience.

By now, the Quins’ musical career spans almost two decades, and this experience lends their songwriting a certain depth and subtlety. Given the album celebrates love in all its facets, most of the tracks are inevitably sentimental, but they never quite become saccharine. Love You‘s lead single “Boyfriend” is striking, breaking with the pair’s famously circumspect treatment of sexuality in their songs. This is a love song loaded with female pronouns, unambiguously addressed from one girl to another. The lyrics express frustration at being treated like a secret by a would-be lover, and its cleverness lies in exploring both the uniquely queer experience of a closeted or secretive partner, and the more universal frustration of a love interest too hesitant to take the next step.

The same-sex pronouns come out again on “BWU,” when the pair sings about “all the girls I loved before.” Though it is kept light by the instrumentals, this track has a subtle maturity running through it. The other girls may have “told me they signed up for more,” but this time it will be different — there’ll be no grandiose promises, no planning for a future that might never materialize, just the two of them together. “BWU” treads ground that has been covered by innumerable songs before it, but is kept interesting by the twins’ fresh approach to the subject matter and willingness to bring the personal. The aftermath of a relationship also gets its due on the album’s other single “100x,” a reflection on (and apology for) a relationship that dragged on far longer than it should have. The subdued piano and elegant vocal harmonies nicely complement the track’s deep sense of nostalgia. Both deeply personal and highly relatable, “100x” provides a welcome counterweight to the upbeat pop tracks surrounding it.

For all their acclaim and commercial success, Tegan and Sara’s turn towards a more mainstream sound has perplexed a small subset of fans and critics who have openly wondered why the duo abandoned their boundary-pushing indie rock for radio-friendly pop music. Fortunately for the rest of us, the Quins aren’t having any of it. By venturing even further into synthy, high-production electropop, Love You to Death should convince all but the most stubborn holdouts that Tegan and Sara are more than capable of bringing their unique depth and talent for songwriting to a broader audience. The duo’s rise from touring in a Greyhound bus to synthpop stars is down to far more than their ability to follow a formula, and behind the slick veneer of Love You is a lot of subtle sophistication. If some complexity is lost amid the synthesizers, it is lost in the service of a polished, memorable and downright fun album. It’s hard to ask for much more than that.

Love You to Death is available on iTunes and Amazon and can be streamed on Spotify and Apple Music.

Love You to Death by Tegan and Sara 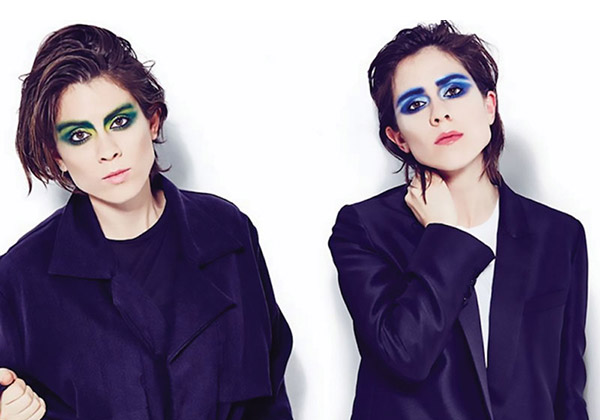