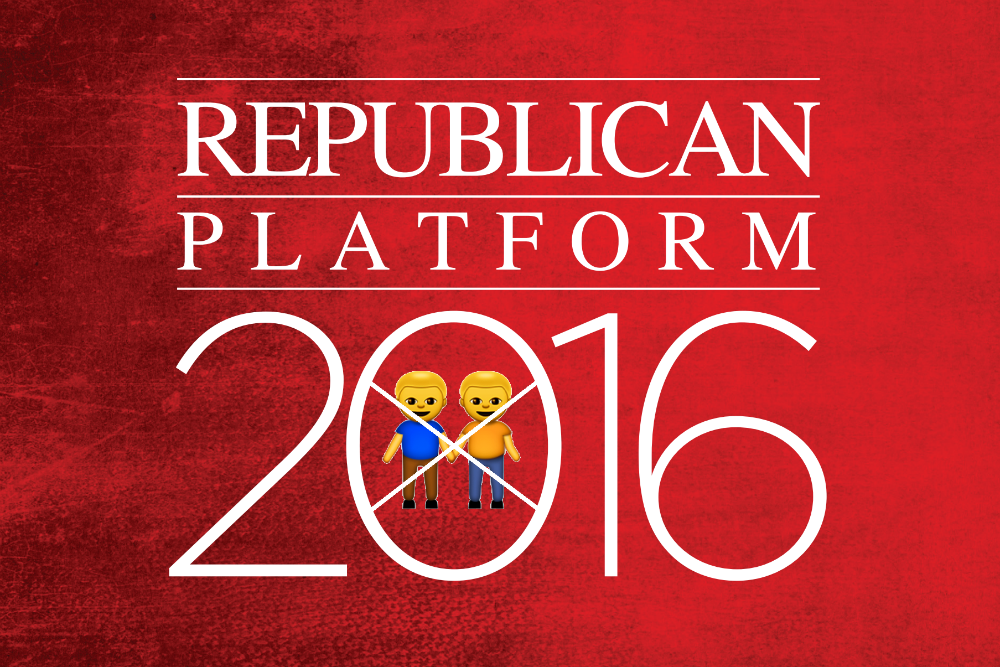 When Gregory T. Angelo, leader of the Log Cabin Republicans, sends an email to supporters blasting his own party, something serious has happened. As it transpired, Angelo was “mad as hell” about the GOP’s 2016 platform, a statement of the party’s views on key policy areas heading into this year’s elections.

Formed by the Republican National Convention’s Platform Committee and approved this week by delegates at the convention in Cleveland, it contains, as Angelo puts it, “the most anti-LGBT Platform in the Party’s 162-year history.” That’s a strong claim, given Republican distaste for most things LGBT in other recent presidential election cycles. So what, exactly, did the GOP approve?

For starters, the platform promises that “only a Republican president will appoint judges who respect the rule of law expressed within the Constitution.” To that end, they promise that conservative judges will be nominated to the Supreme Court, to help reverse “activist decisions” such as Roe v. Wade, Obergefell v. Hodges and the various cases which granted legitimacy to President Obama’s health care laws. Never mind that, in 43 years and with numerous conservative justices nominated to the court, Roe still stands.

Unfortunately, despite 61-percent of Republican-leaning voters supporting same-sex marriage, the GOP has decided to enshrine opposition to it in their platform. “Traditional marriage and family, based on marriage between one man and one woman, is the foundation for a free society,” reads the platform. They “condemn” the Supreme Court’s legitimacy in the Obergefell case, calling it a “lawless ruling” (this, directly after passages about being a party that will respect the Constitution). “Five unelected lawyers robbed 320 million Americans of their legitimate Constitutional authority,” the platform complains, ignoring that five of the nine justices on the bench were nominated by Republican presidents — including Anthony Kennedy, who opted to side with the liberal wing of the court in supporting marriage equality.

Elsewhere, the platform again espouses the apparent superiority of “the union of one man and one woman,” claiming that “the data and facts lead to an inescapable conclusion: Every child deserves a married mom and dad.” Except, neither the data nor facts support that conclusion. A 2010 study by University of California-San Francisco found that the children of lesbian couples tended to rate higher in school and exhibit lower social problems than other children, a 2014 study published in Population Research and Policy Review found that “American children living within same-sex parent households fare just as well as those children residing within different-sex parent households,” and a 2013 Tufts University study determined that despite facing “economic and legal disparities and social stigma,” same-sex households were resilient to negative effects. Indeed, one of the biggest issues was stress as a result of lack of opportunities to marry — a situation fostered and supported by Republicans. Oh, and in case it wasn’t already apparent, the GOP platform also supports denying same-sex couples adoptions.

Rachel Hoff, a member of the committee that drafted the platform, pled for the GOP to recognize LGBT people like her (Hoff was the only openly gay person on the committee). “We are your daughters, your sons, your friends, your neighbors, your colleagues. All I ask today is that you include me and those like me,” the Carroll County Times reports her saying. Hoff’s suggestion was rejected, 82-30. Instead, the committee approved of ex-gay conversion therapy for minors and demanded an end to “social experimentation” in the military.

The New York Times editorial board called it the “most extreme Republican platform in memory,” writing that it “makes homophobia and the denial of basic civil rights to gays, lesbians and transgender people a centerpiece.” The Concord Monitor called the platform “truly frightening.” Annie Dickerson, a platform committee member, asked of the repeated gay-bashing in the platform, “Has a dead horse been beaten enough yet?” Dan Savage blasted LGBT Republicans who continue to support the party in the wake of this platform, writing in The Stranger that it “goes beyond standard-issue self-hatred.” James Richardson, a former spokesman and advisor for the Republican National Committee and two GOP Governors, wrote in TIME that, “It would be easier to defend the belief that earth is the center of the universe than some of the nonsense installed as official party dogma for the next four years.”

Oklahoma Governor Mary Fallin desperately tried to defend against criticism of the platform this week, saying the committee believes in “the human rights of all people, not just one segment.” She pointed to the one gay member of the committee (Hoff) as proof that the party wasn’t anti-LGBT.

“We’re an inclusive party, we’re a big tent,” Fallin told CNN. “There are many different ideas, but the main thing is: we think all human beings, no matter who you are, deserve respect.”