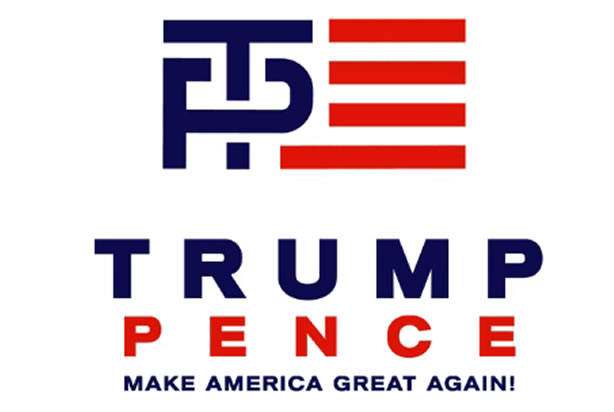 It is entirely possible that Donald Trump’s presidential campaign is deliberately taking a page from Bonnie Raitt, to “give them something to talk about,” but from reaction to the campaign’s new Trump-Pence logo, it’s probably unlikely.

After news broke yesterday that the relatively unknown Gov. Mike Pence had been tapped as the billionaire mogul’s running mate, the Internet was flush with blog posts, Facebook posts and tweets examining Pence’s record on a host of issues (he’s notoriously anti-LGBT).

And then, the Trump campaign released its official logo, with an unfortunately-placed “T” and “P,” and all hell broke loose.

Breaking the mattress of America. pic.twitter.com/M4Cq62YS2c

Some Twitter users followed Samantha Bee’s cue, suggesting that the logo was in some way reminiscent of a sexual act:

How are we supposed to explain the new Trump logo to our children??

Trump: Penetrating the election one logo at a time. pic.twitter.com/dsjgaYMCtf

Others pointed out the “hypocrisy” given the GOP’s relatively puritan stance on sexual relations.

I thought T in P was verboten in the Republican Party.https://t.co/jAhUHdhjR1

the Trump-Pence logo looks like a forbidden sex act that Pence would definitely not be OK with pic.twitter.com/sZxVv3E32h

Others briefly wondered if there could be another, more insidious logic behind the logo.

So, uh, there's more than a passing resemblance to the Trump/Pence logo here. pic.twitter.com/2IdkCZUpmZ

The new Trump-Pence logo is the worst thing I've seen today. It looks like a Third Reich emblem.

Trump-Pence new logo was lifted from the Aryan Nation. Just like his campaign. #GOPBigots https://t.co/z4lbaGd89Z

But then they went back to their theories about sex.

Trump is still trying to remind us that he has a decent sized penis, contrary to Rubio's claims. Thus, this logo. pic.twitter.com/bTZX6G4p9f

The RNC has approved this version of the Trump-Pence logo for use at the convention. #TrumpPencetration pic.twitter.com/wveyUjMIuu

Some wondered aloud whether the campaign had made the right choice, given reports that Trump had tried to drop Pence as his VP at the last minute.

So they would accidentally make a Trump/Christie logo look just like a hammer and sickle, right?

Given the Trump/Pence logo, I'm thinkin' there were no logos ready at all. https://t.co/0rXBqPQQXr

Meanwhile, Chris Christie is in a McDonald's in New Jersey doodling a "Trump Christie" logo on a napkin that's even sexier than #TrumpPence.

Some took it upon themselves to be bipartisan when it comes to sex jokes.

I really hope Hillary Clinton picks Sherrod Brown for VP so we can get this logo to rival Trump's. pic.twitter.com/fIDksMp0XH

And still others pointed out that the logo is a bit homoerotic — ironic considering the flak that both Trump and Pence have received from some LGBT groups.

As someone else pointed out, that logo is distrubingly homoerotic. https://t.co/X8fuIzGVOi

subliminally Homo-erotic. That T is penetrating the P. It makes perfect sense for a couple of hateful homophobes. https://t.co/YtLGw2oiNR