Lego Star Wars: The Force Awakens is an effortless, enjoyable and thoroughly welcome return to form for the franchise

Star Wars: The Force Awakens is the perfect source material for the Lego gaming franchise. As a film, it was fuelled by nostalgia, harkening back to the glory days of the Star Wars franchise, offering the same fun, excitement, action and pathos that underscored the original trilogy. But it was also modern, beautiful, carefully constructed and helped introduce the franchise to younger viewers. That, in a nutshell, is exactly what Lego Star Wars: The Force Awakens (

) accomplishes — except here, we’re revisiting the glory days of the Lego series, too.

Star Wars helped catapult Lego’s digital franchise into a cultural phenomenon, with its blocky, comedic, silent-movie interpretation of the original trilogy an utter delight to play through and introducing the gameplay tropes that are — like years-old lego blocks — incredibly familiar and incredibly worn by this point. Unlike other recent entries in the Lego game series, however, Force Awakens doesn’t rest on its laurels, half-assing its snippets from the film or offering gameplay that does little more than pad a disc. Instead, it takes us back to the glory days of the franchise, when everything felt new, fresh, and most importantly, fun.

That’s not to say that too much has changed here. For the most part, this is the same brick-based gameplay that has spawned dozens of other titles across countless franchises. Force Awakens follows the plot of last year’s film, taking players through Rey and Finn’s story as they combat the First Order and aid a struggling Resistance. A massive variety of characters are available to control, including Poe Dameron, Han Solo, General Leia (and Princess Leia), Chewbacca, Kylo Ren, C-3PO, R2-D2, BB-8 and dozens more. Players will also visit several locations, including Jakku, Starkiller Base and Endor.

If you’re struggling to remember Endor and its adorable/creepy Ewoks in the latest Star Wars film, worry not. Lego Force Awakens actually opens at the end of the Return of the Jedi, introducing players to its gameplay on Endor and the final battle sequence with the Death Star. The reason is not only nostalgia, but to show players that they’ll be playing through more than just the film sets. Lucasfilm gave developer Traveller’s Tales free reign to craft unlockable missions between the events of Jedi and Force Awakens to expand certain characters’ backstories, including Poe’s rescue of Admiral Akbar, why C3-PO has one red arm, or just how Han and Chewbacca managed to capture the rathtars on their freight ship.

Gameplay mixes tried-and-tested with subtly innovative, creating one of the best iterations of a Lego game in recent memory. Players still predominantly smashing blocks, beating or shooting enemies and constructing new structures to advance through simple puzzles, but the road from A to B isn’t quite as obvious as before. Those buildable structures now have variety, and can involve building with the same blocks multiple times to open new routes or provide different ways to approach an enemy, such as crafting a giant robot to take down a flamethrower-wielding Stormtrooper, or constructing a large bag of popcorn, which he’ll gleefully heat up then dance around as kernels start to fly.

There’s also a mock Gears of War-style cover-shooting system. Characters hide behind structures and engage in firefights, though these predominantly boil down to holding down one button and tapping another — there’s little actual aiming or skill required. Still, it helps highlight just how advanced the series’ graphical engine has become. Played on PC, with settings to max, the game shines in a way no recent Lego title has managed. Those shooting sections use depth-of-field to stunning effect, while elsewhere, there’s beautiful lighting, texturework, animations, and a stunning attention to detail. The game’s various worlds feel big, dense and bursting with character. Flying sections in particular are not only a highlight, they’re also spectacular showcases for just how advanced the franchise has become over its early days.

That follows through to audio quality, with John Williams’ instantly recognizable score as glorious as ever, but also a marked improvement on the inadequate approach of Lego Marvel Avengers with regards character dialogue. Rather than cut lines directly from the film, Warner Bros. roped in Daisy Ridley, John Boyega, Adam Driver, Oscar Isaac, Carrie Fisher and Harrison Ford to record original dialogue. It was money well spent.

In another marked improvement over Lego Avengers, the humor is once again on-point. Sure, it’s the same slapstick style, but here it feels like an adult crafted it, rather than a room full of preschoolers. There’s classic fan service as well as broader comedy on display. In the opening scenes, when Luke tells Vader he won’t fight him, he hands his father a child-like drawing of Vader in full costume, holding his lightsaber. It causes a beautiful father-son moment that had me laughing out loud, as Palpatine looked on incredulously. Such humor, be it foreground, background, subtle or broad, feels appropriate — it balances the film’s darker elements with the lighthearted nature of Lego games.

Whether you get your money’s worth from Lego Force Awakens depends on your dedication to collectibles. Scouring each level for minikits, red bricks, random objectives, new characters and carbonite bricks will take longer than the 8 hours required to play through the core story. Completing these optional objectives is also the only way to unlock the additional, lore-building missions that the game offers, so if you want to plug some of the plot holes in the film, you’ll need to get to work.

Ultimately, though, that’s exactly what this game avoids feeling like. Even without exploration, the padded, boring, repetitive gameplay of Marvel Avengers has been replaced with fun, excitement, and a return to the franchise’s glory days. Lego and Star Wars go hand-in-hand, as evidenced by the success of those original games, and as repeated (and improved upon) here. Yes, this is still the same Lego we’ve become oh-so-used to, but — just like Force Awakens — it’s a nostalgia trip worth everyone’s time.

Lego Star Wars: The Force Awakens is available now on every platform known to man. If you own a recent gaming system (or an iOS device), you can play it. 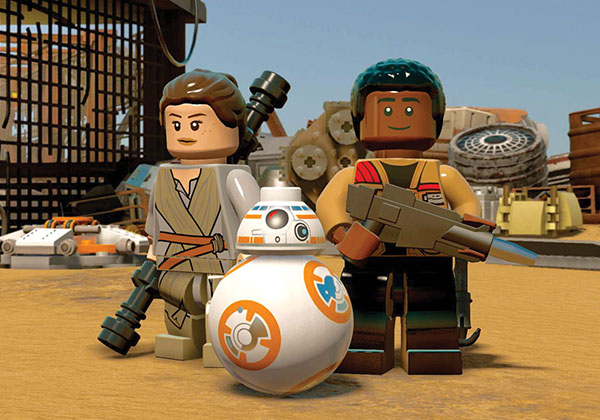