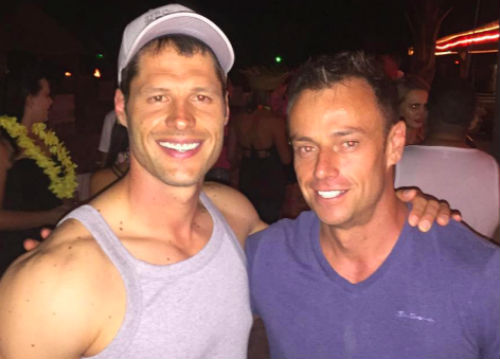 A gay male couple in South Africa have become what is believed to be the first case of a same-sex couple to have triplets sharing both fathers’ DNA, according to Sky News.

Theo and Christo Menelaou, a couple from Pretoria, had the three children via a surrogate. They went to an egg bank and chose to implant one embryo with Christo’s sperm and another with Theo’s sperm. But 10 weeks into the pregnancy, a scan revealed that one of the embryos had split, meaning the surrogate was now carrying triplets, including one set of identical twins.

Several doctors advised the couple and the surrogate to terminate two of the babies to give the third a better chance of survival, but they refused. They eventually found a gynecologist, Dr. Heidra Dahms, of Sunninghill Hospital, who agreed to deliver all three babies.

All three babies were born on July 2, after just over 31 weeks of pregnancy. Joshua, the first to be born, weighed 4 pounds, with identical twin sisters Zoe and Kate weighing in at 3.1 and 2.9 pounds, respectively. They were placed on machines to help them breathe and monitored until they were considered strong enough to leave the hospital. One of the babies still has to undergo subsequent heart surgery.

Nonetheless, the couple were overjoyed that all three children survived, defying the odds.

“When you are gay, there is always the thought that it just may not be possible to be a parent no matter how much you would love to be,” said Christo Menelaou. “It’s very hard to be accepted for adoption and we were told we would always come after heterosexual couples. And then we just never thought we’d ever find a person who would want to be surrogate to a gay couple.”

“We feel so blessed,” Theo Menelaou told Sky News. “We really do.”

Other People’s Children: Surrogacy and its misconceptions

John Riley is the local news reporter for Metro Weekly. He can be reached at jriley@metroweekly.com
← Previous Story ISIS executes four men for homosexuality
Next Story → Anti-gay U.S. pastor calling for killing gays is deported from Botswana