Home / Arts + Entertainment / Games / Xbox One S review: What the One should have been

Xbox One S review: What the One should have been 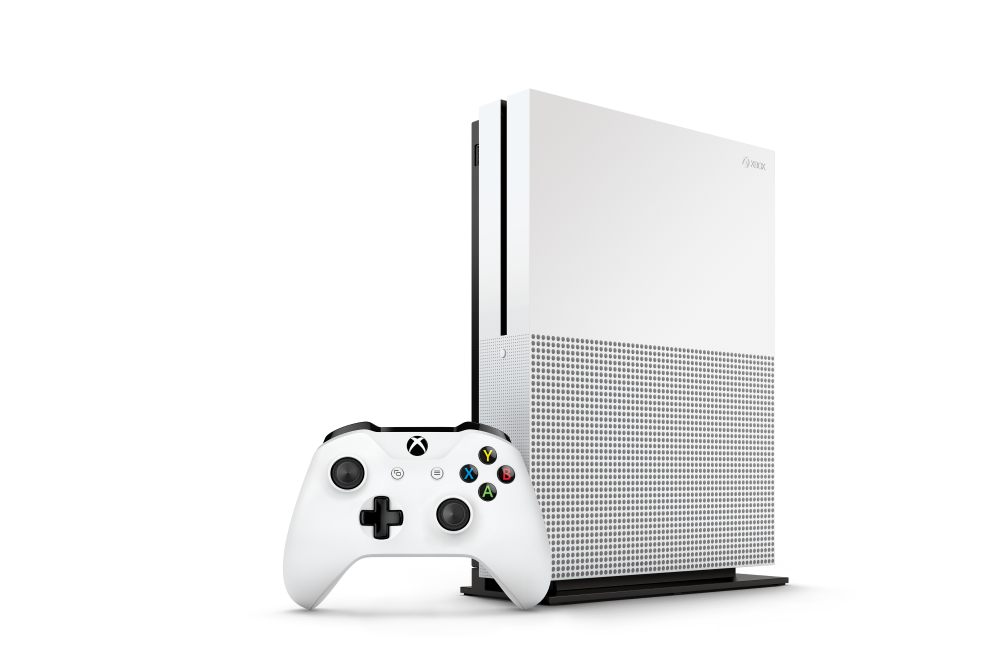 Finally, Microsoft’s console is what it always should have been. After three years of memes, jokes, unflattering comparisons and a host of other less than positive commentary, the bulky, bloated Xbox One has given way to a new, sleeker option: the Xbox One S. More than just the typical “Slim” update gamers are accustomed to, the One S is a complete reimagining of what the One should have been — and what gamers always wanted it to be.

But it also represents something of a dilemma. For those who dropped $499 on their Xbox One a few years ago, is this new console worth it? And, given we know there is a much more powerful console — dubbed “Project Scorpio” — launching at the end of 2017, is there any point jumping on the One S bandwagon now? There’s no definitive answer to either of those questions, but what’s immediately apparent is that the Xbox One S is a great update to Microsoft’s gaming machine.

The most obvious change is the One S’s exterior overhaul. After Microsoft seemingly modeled the original One on home theater set-ups from the ’80s, the One S takes its cues both from its main rival, Sony’s PS4, and from the fact that not everyone has room around their TV for a giant, slab-sided box. The official figure is forty percent smaller, but in hand and on a TV stand, the One S looks tiny in comparison to its older sibling. With its matte aesthetic and stark white color, it’s clear Microsoft wanted to put as much space as possible between the old and new consoles.

There are numerous updates to the original design, not least that matte finish, which won’t scratch at the slightest hint of a foreign object like the original One. Gone, too, are the capacitive buttons from the One, which anyone with a pet can attest to being nothing more than hyper-sensitive nuisances. In their place are good, old-fashioned clickable buttons. The USB port placement has also improved, with the side port on the original moved to the front, along with the sync button for the new controller (more on that later). Gamers won’t have to worry about the Xbox’s infamous power brick stealing yet more space, as Microsoft has finally followed in Sony’s footsteps and integrated it into the console itself. Speaking of the PS4, the One S is much closer in size. It’s slightly taller, slightly wider, but doesn’t reach quite as far back as the surprisingly deep PS4. What’s more, unlike the original One, the One S can be stood vertically — and unlike Sony, Microsoft includes the stand in the box. It’s a nice touch, given the tendency to nickel-and-dime gamers these days. Similarly, for anyone still using a Kinect you’ll now need an adapter, as the dedicated port was lost in the One S’s downsizing, but Microsoft will ship one out for free (for a limited time).

Matte plastic may wear better, but it doesn’t exactly convey all of the almost four hundred dollars you’ll be spending on the console.

The console itself isn’t the only thing redesigned, however. The Xbox’s excellent controller has also been overhauled, gaining grippier thumbsticks, a dedicated headphone jack, Bluetooth connectivity, and more textured handgrips. Unfortunately, it feels a little cheap, especially when compared with the One’s smoother controller and the PS4’s textured effect. It’s something that also conveys to the One S itself — matte plastic may wear better, but it doesn’t exactly convey all of the almost four hundred dollars you’ll be spending on the console. Plastics aside, the decision to ditch the original controller’s WiFi connection for Bluetooth has vastly improved reliability — audio stutters when directing sound through the One’s controller are far less frequent on the One S, while the controller has yet to randomly disconnect, a problem that plagued my Xbox One. 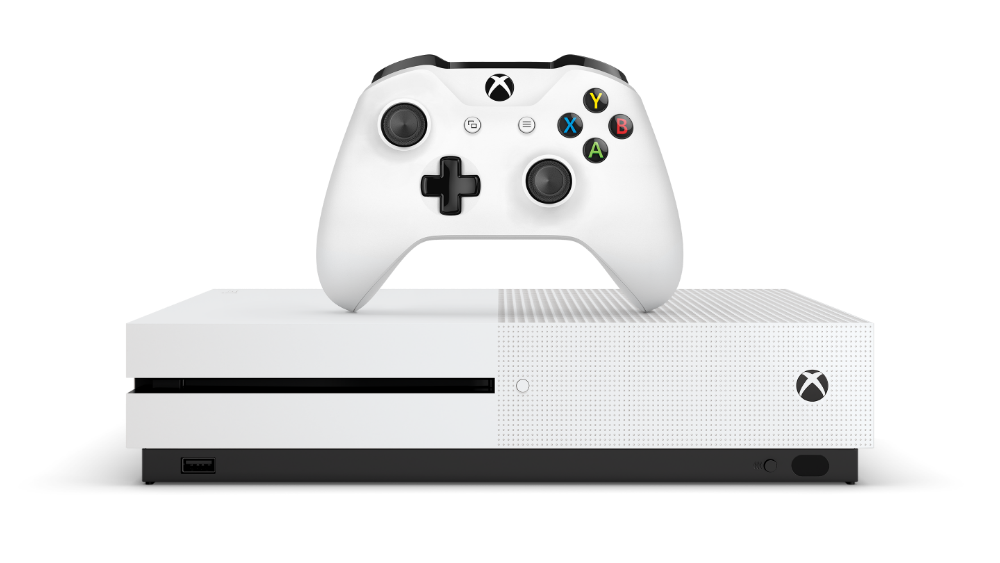 Where the Xbox One really differs over previous console generations is inside. Unlike the thinner updates to the PlayStation 3 or Xbox 360, Microsoft hasn’t just made the One S more power efficient (they have, to the tune of at least 25 percent, according to some tests), they’ve also made it more powerful and more capable. The GPU, long a sore point for Xbox fans after it transpired the PS4 could maintain higher resolutions and framerates, has been overclocked by about seven percent. While that doesn’t sound like a great deal, in reality it makes a notable difference.

In particular, it was essential in enabling the One S to output 4K video and support High Dynamic Range (HDR) content. Whereas the PS4 and original One are limited to 1080p, the One S can upscale games to 4K and output 4K content natively from streaming services such as Netflix and Amazon, and from 4K Blu-rays. No, there won’t be any 4K games (you’ll have to wait for Project Scorpio for that), but for anyone with a newer 4K television, there’s a definite benefit to the One S. The new console also helps those confused as to what technologies their TV supports — a simple list shows everything your TV is capable of, and the HDMI cable that comes bundled with the One S supports everything the console can.

HDR is something that games on the One S will benefit from, promising deeper contrast and richer colors — but the number of TVs that actually support HDR is pretty low. There are also no games currently out that support the technology, and Netflix has only recently started to roll out HDR-enabled content. As such, it’s going to be a while before the true benefits of HDR can be appreciated.

Games on the One S run at a more stable framerate, a higher framerate, or are less prone to abnormalities than the original One.

What is appreciable, however, is the effect the more powerful GPU has on gaming. While it won’t make a jot of difference in CPU-intensive games such as Fallout 4, in titles that rely heavily on graphics processing, gamers can expect real benefits. The good folks over at Digital Foundry tested a number of games and found that the One S either would run at a more stable framerate, a higher framerate, or be less prone to abnormalities than the original One. Microsoft enabled access to the GPU in every application and game on the One S, so if you’ve tried a game and found that it’s a little too rough on the original One, there’s a chance it might be more palatable on the One S — which should also make those PS4 comparisons a little less embarrassing for the Xbox team.

So, it’s smaller, it’s lighter, it’s controller is more reliable, it works better with 4K- and HDR-enabled televisions, and it makes gaming a little smoother and more consistent. Upgrading to the One S must be a no-brainer, right? Well, no. For starters, it’s $399. That’s just $100 less than the original One launched at less than three years ago. If you have a One and don’t have a 4K TV, the only benefit here is slightly improved gaming in certain titles, lower energy bills, and more space on your TV stand.

If you’re someone who doesn’t yet own an Xbox One, the One S again seems like an obvious choice. Except the original One is going for $250 on Amazon with a free game. Again, if you don’t have a 4K TV and don’t care about the smaller size and power consumption, the One S doesn’t make much sense.

And then there’s Project Scorpio. It’s set to enable true 4K gaming, with more powerful internals, but don’t expect it to launch at $399 — it’ll be $499 or above. If you buy a One S now, it’ll be hard to justify upgrading to Scorpio in just 12 months.

And yet, there’s an undeniable charm to the One S. Swapping from the original One is a doddle — copy your digital games to an external hard drive, plug that into the One S, sign in and you’re good to go, which makes upgrading a breeze. What’s more, there’ll be cheaper 500GB ($299) and 1TB ($349) bundles launching soon, which will make it more palatable to both upgraders and first-time buyers. The 2TB, $399 model that launched last week is the priciest option apart from a red-colored special edition coming this Fall. If you’re eager to upgrade, wait and grab a lower-storage model when they launch on August 23. There’s also the fact that, for as little as $299, the One S is one of the most capable 4K Blu-ray and streaming devices on the market.

Ultimately, the One S is the console this current generation of Xbox always should have been. It’s quiet, it’s efficient, it’s more thoughtfully designed, and more versatile. It discards the faux-VHS looks and media center aspirations of the original and focuses on what matters. Whether it’s streaming House of Cards in 4K, or enjoying smoother framerates in games, or using a controller that doesn’t require an extra adapter to work with headphones (nickel-and-diming at its best), the One S is a great console. Whether it’s a necessary one is entirely up to you.

The Xbox One S is available now.

Rhuaridh Marr is Metro Weekly's online editor. He can be reached at rmarr@metroweekly.com.
← Previous Story First Look: We Happy Few is fun but flawed
Next Story → No Man’s Sky (review): It’s flawed, but also phenomenal