Better cameras, water resistance, and the absence of a headphone jack are the biggest changes in Apple's flagship device 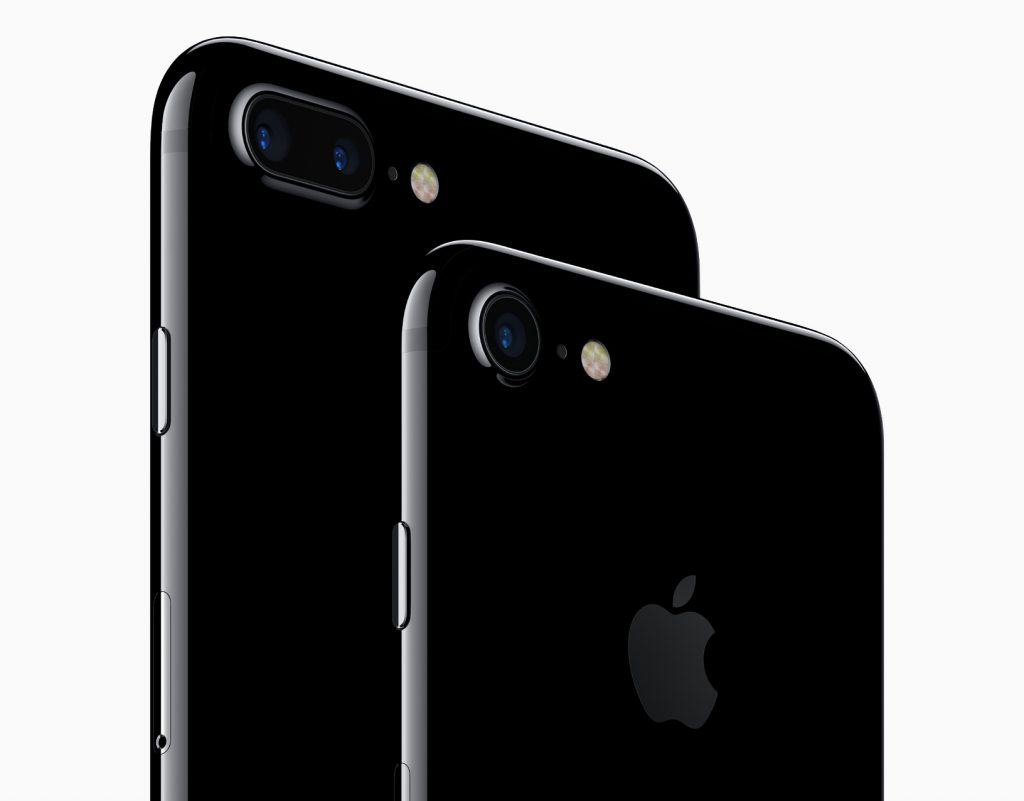 Another year, another set of iPhones. However, what many analysts had guessed would be an iterative, somewhat dull update has transpired to be something a little more interesting. No, there’s few surprises with the iPhone 7 and 7 Plus beyond what the rumor mill had already suggested, but Apple’s “best iPhone ever” moniker certainly rings true.

First, what hasn’t changed. The 7 and 7 Plus still have 4.7- and 5.5-inch displays respectively. They still start at $649 and $749. They still come in gold, rose gold, and silver. Only it’s here that things start to get a little different. Space Grey is out, in come black and Jet Black — essentially, matte black and a high gloss black that will likely be slippery as hell and prone to scratches (Apple has already admitted to the latter on its website). Still, they’re much cooler than the grey of old, so that’s something.

Starting storage is different, too. Those trying to get the cheapest iPhone will no longer be penalized — base storage is now 32GB, with 128GB and 256GB $100 and $200 more. And though the design is largely unchanged (antenna bands were shifted and… well, that’s about it), a few things stand out. First is the absence of a headphone jack. Yup, the rumors were true — it’s Lightning-only from here on out. However, if you refuse to upgrade to Lightning headphones or wireless buds, Apple are kind enough to offer an adaptor in the box.

There’s also stereo speakers, which Apple claims are twice as loud as the mono speaker on the 6s and 6s Plus. The headphone button is no longer a physical button, but rather uses Apple’s Force Touch technology and offers haptic feedback to make it feel like a clicky button. That helps the iPhones achieve their newest feat: they’re now water resistant. No, you can’t fully submerge them like Samsung’s latest phones, but they should hold up to accidental splashes, spills, and rain, as well as dust and sand thanks to their IP67 rating.

Under the (much larger) camera hump, there’s a new 12 megapixel sensor on the iPhone 7. It’s optically-stabilized for the first time on the smaller model, offers f/1,8 aperture, four-color flash, flicker sensor to avoid flickering in video, RAW DNG capture, and reduced shutter lag. Up front, selfie addicts will appreciate the new 7 megapixel sensor. 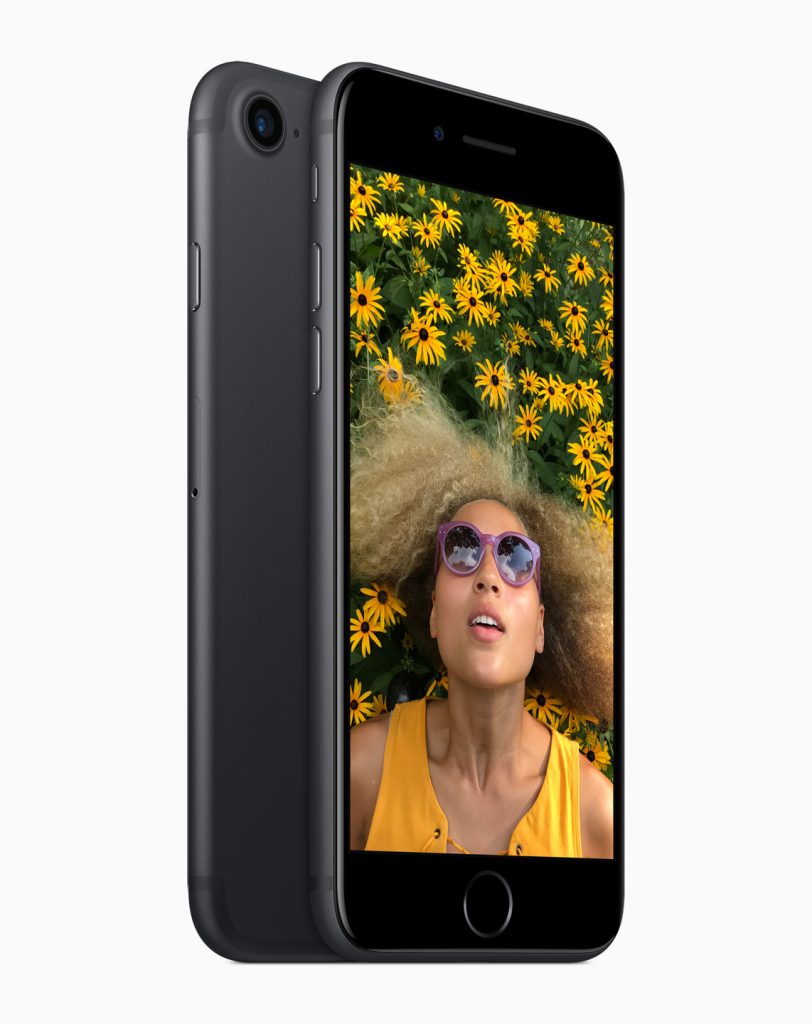 For the 7 Plus, rumors were once again correct. Much like Huawei with its Leica-developed P9 smartphone and LG’s G5, Apple have introduced a dual-camera setup. It apes the G5 by using one camera for wide angle shots, the other for telephoto shots, allowing optical zoom up to two times and digital zoom up to ten times — albeit Apple claim without the horrible loss in quality this would normally bring. It also allows for advanced depth of field effects to produce DSLR-style “bokeh” (blurred backgrounds) in images. It’s something other phones have done before, but a new image processor and Apple’s penchant for quality should mean their setup is one of the better ones out there.

To better appreciate all the photos you’ll be snapping, Apple have also upgraded the displays. They may not be the best smartphone screens available as Phil Schiller stated onstage (Samsung is widely credited with that honor), but they’re improved over last year’s phones, with support for P3 color space, which should offer richer reds and yellows. They’re still stuck at 1334 x 750 and 1920 x 1080, just like last year’s phones, but if it ain’t broke… 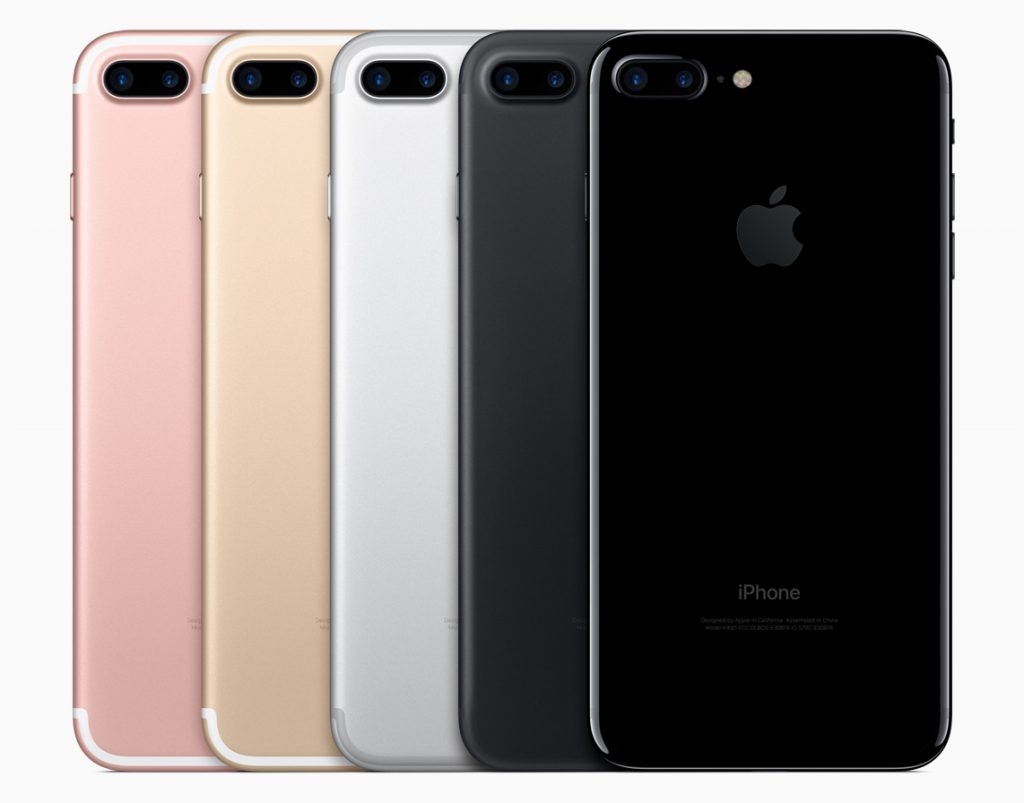 Powering all of this new tech is Apple’s most powerful processor ever, the A10 Fusion. Raw specs? It’s a 64-bit, 4-core chip that embraces a technology found on almost every Android phone: two high performance cores power gaming and other intensive apps, while two efficient, lower power cores handle things like reading email. By juggling which processors handle which tasks, the 7 lasts two hours longer than the 6S, while the 7 Plus bests the 6s Plus by an hour, according to Apple.

Gamers can rejoice, too, as both iPhones contain what Apple claims is the most powerful graphics processing in any smartphone, including forty percent faster processing than last year’s phones.

If this all sounds good to you, pre-orders for the new iPhones start September 9, and will hit stores September 16th. 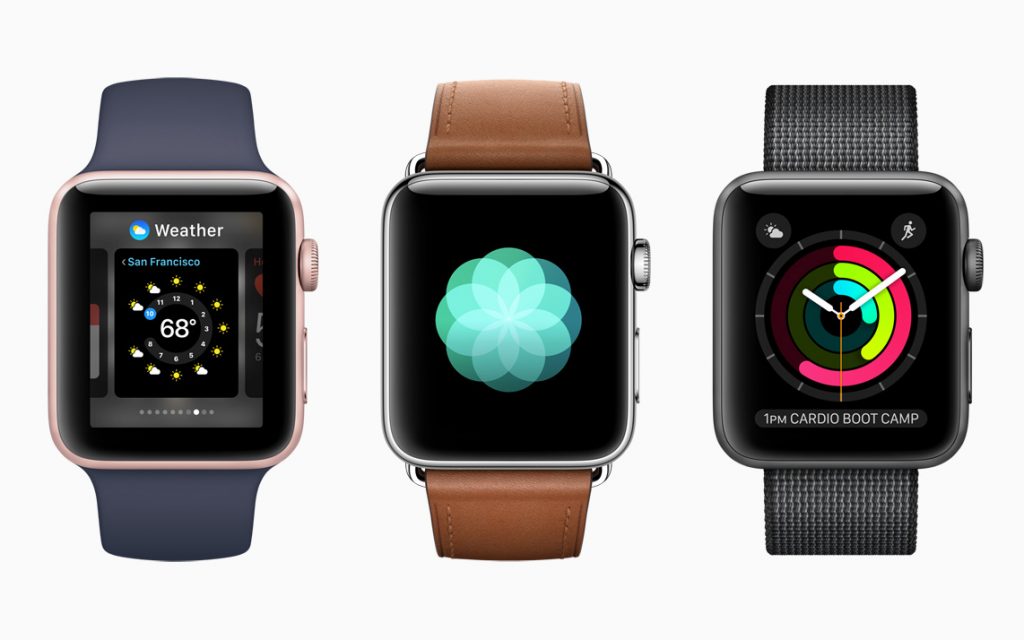 Apple Watch fans, meanwhile, can rejoice, as the Watch Series 2 is here to smooth over any rough edges in the original Watch (which Apple says has helped them become the second-biggest watchmaker in the world).

Key features are waterproofing to 50 meters — swimmers can take advantage of the new Watch, for instance — GPS to help with tracking and navigation, and a new processors and display. The Watch Series 2 has a dual-core processor and graphics that are twice as fast as the original Watch, while that new display maxes out at 1,000 nits — making it the brightest display Apple has ever shipped.

In addition to steel and aluminum, Apple will also offer ceramic cases for the Watch, said to be three times stronger than steel. They will also partner with Hermès and Nike to make special versions of the Watch — luxury and sporty, respectively. 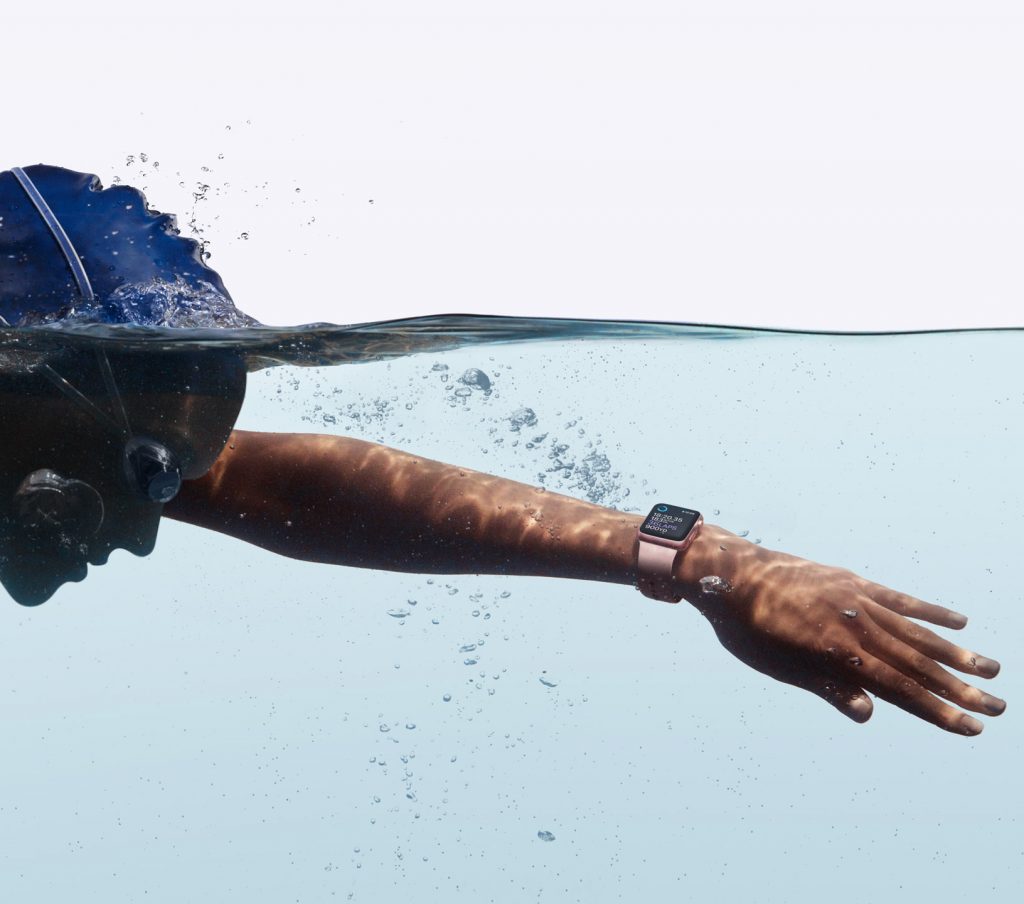 GPS and better internals will also lead to better apps on the Watch. Pokemon Go, for instance, will launch later this year, letting gamers catch pokemon, hatch eggs, and track their steps without needing to drain the life from their phones. 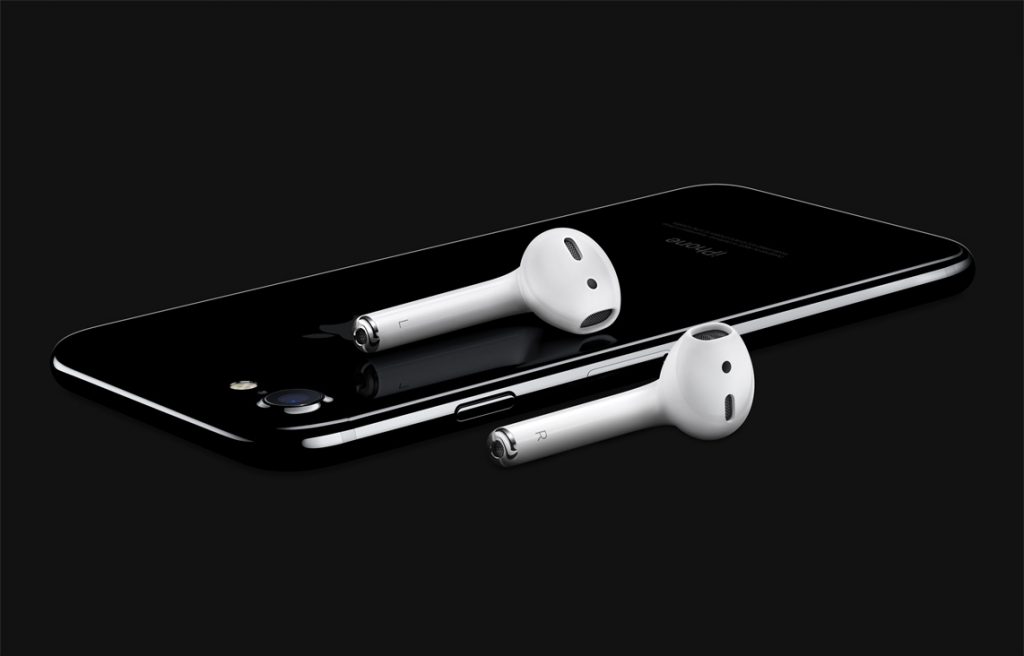 Somewhat surprisingly, one of Apple’s coolest announcements wasn’t a watch or phone, but new earbuds. After killing the headphone jack, it only stood to reason that Apple would create its own wireless headphones, and that’s precisely what the Apple AirPods are. Like EarPods with the cord cut off, they feature a multitude of sensors, powered by a new W1 chip. They’ll know when you’re wearing them, pausing music when you remove the buds and starting it again when you pop them back in. They also feature touch sensors, so you can double tap to activate Siri, or answer a call.

They can be operated as a mono headset, too, by just wearing one. The AirPods offer five hours of battery life and, like some other wireless headsets, offer a charging case with a battery that’ll keep them going for an additional full day before it needs to be juiced up. Pairing is a breeze, too — just open the charging case next to your iPhone and they’ll be automatically detected. They work with the Watch, too.

They’re not cheap, however (shocking, we know). Expect to cough up $159 for the privilege of going wireless with Apple branding on the side. 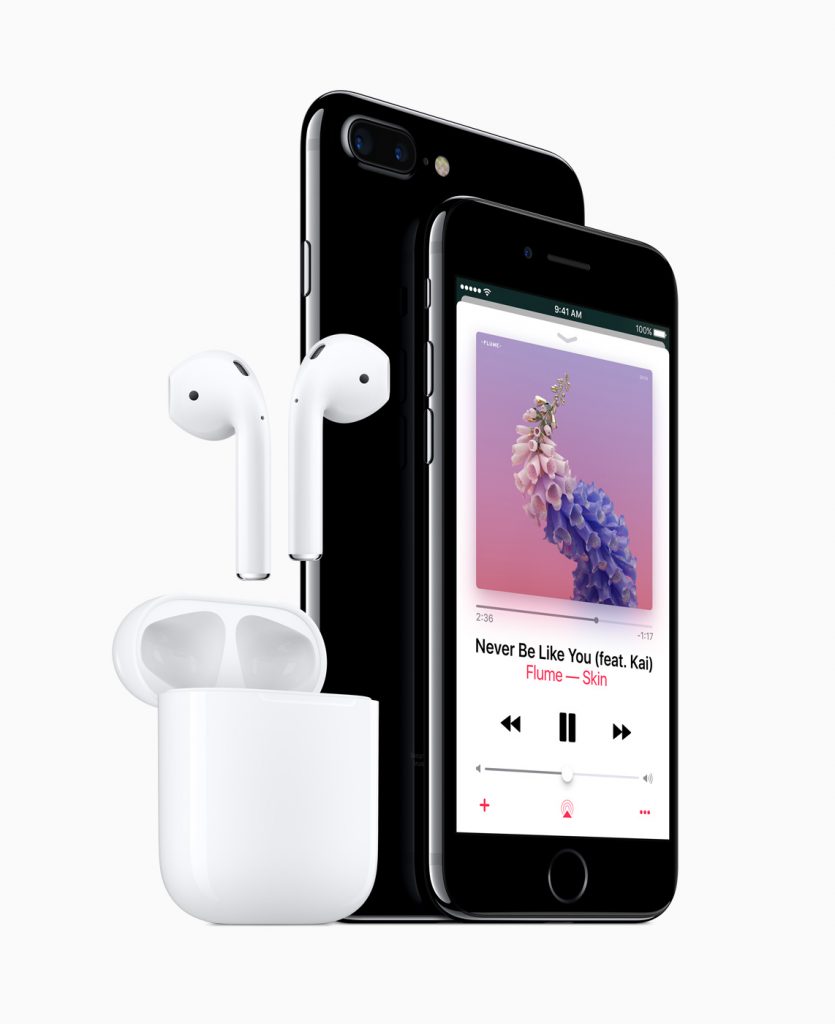 What do you think of the new iPhones, Watch and AirPods? Let us know in the comments below!

Rhuaridh Marr is Metro Weekly's online editor. He can be reached at rmarr@metroweekly.com.
← Previous Story Rotten Berry: BlackBerry’s DTEK50 is doomed to fail
Next Story → Google has declared war on Apple, Amazon and Samsung