Surface Studio is a $3,000 all-in-one that's as much about looks as it is productivity 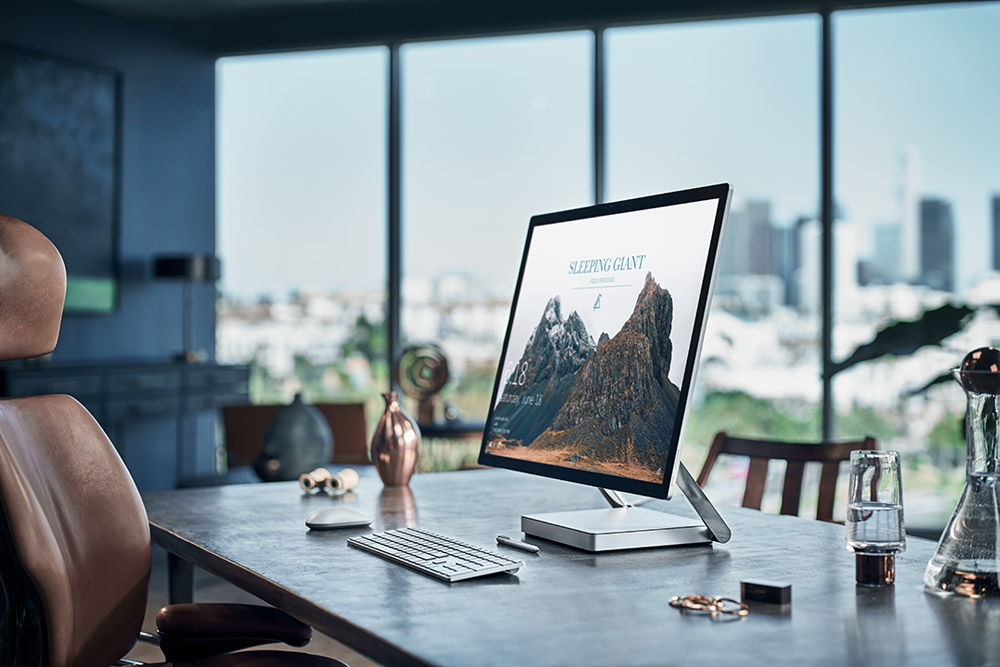 Microsoft continue to knock it out of the park with their Surface family of devices. The latest member, the Surface Studio, is a gorgeous, flexible all-in-one aimed squarely at creative professionals. It’s designed to make creating, writing, editing, and viewing content as pain-free and immersive as possible.

Yes, this is ostensibly Microsoft’s answer to Apple’s iMac, but it’s also so much more. If anything, the Surface Studio has leapfrogged past Cupertino’s slender all-in-one in the visuals departments. A half-inch deep aluminum-encased display rests on two chromed legs, attached via a “zero-gravity” hinge to an aluminum box containing the core innards of Microsoft’s machine.

The effect is dramatic. The Studio is thin in a manner normally reserved for tablets and high-end HDTVs, its display — 28 inches and containing the world’s thinnest LCD panel, according to Microsoft — enhanced with slim bezels and razor-sharp edges. Forget dusty, plastic Windows PCs of old. The Surface Studio is an entirely new generation of PC.

It’s also an incredibly powerful one. Microsoft’s Panos Panay constantly referred to the potential of the machine at today’s event in New York City. “We totally believe that Surface changes the way you produce, the way you create, the way you learn,” he said.

The specs certainly align with those dreams. That 28-inch screen boasts a resolution of 4500 x 3000 in a 3:2 aspect ratio (the 27-inch iMac runs 5120 x 2880, for anyone keeping score) and has touch input and support for Microsoft’s Surface Pen. It also supports expanded color output, dubbed “TrueColor,” and users can switch between DCI-P3 and sRGB immediately to compare the difference in their work.

That’s not the only trick in the Studio’s arsenal, however. It can also recline to 20 degrees with a gentle push — the benefits of its zero-gravity hinge. Users can adjust to the angle they require, with the lowest setting clearly aimed at artists and those who spend a lot of time writing, drawing, or marking up documents.

The smooth, gentle nature of the Studio’s recline is also yet another example of just how far Microsoft’s hardware department has come since the launch of the first Surface just four years ago.

Powering everything is a mix of Core i5 and i7 processors, either an Nvidia GTX 965M or 980M GPU, up to 2 TB of fast solid state storage, and up to 32GB of RAM. On the back of the base, there’s four USB 3.0 slots, a Mini DisplayPort, gigabit ethernet, SD card reader, and a 3.5mm headphone jack (remember those, iPhone 7 users?).

Microsoft also crammed in a microphone array to enable their voice assistant Cortana to be used across a room, as well as stereo 2.1 Dolby audio speakers.

Microsoft also announced the Surface Dial, a brand new peripheral that works with the Studio, Surface Book and Surface Pro. It can be placed on the screen to activate a contextual menu: color pallet or brushes in drawing apps, different pen options in OneNote, font options in Word, etc. Microsoft showcased artists using the dial to adjust settings on the fly as they painted, sculpted and manipulated their works. If it works as well as suggested, it could become an essential tool for some.

Even at those prices, Microsoft clearly expects the Studio to sell well — and, let’s face it, on looks alone it would be worth it for some — but if you’re interested you’ll have to be quick to snap one up. It ships December 15th and preorders are live now, but Microsoft say supplies will be limited until 2017.