Mercury Soul merges electronica and classical at the Kennedy Center 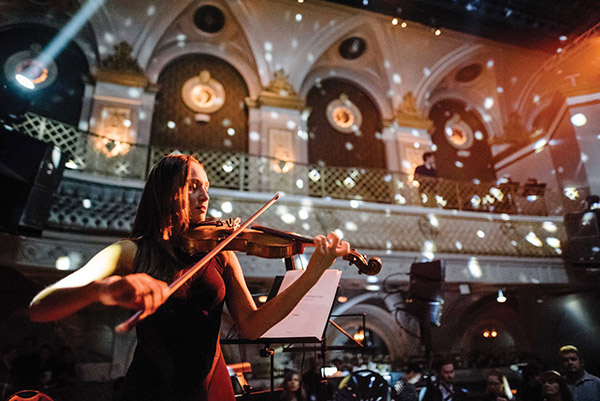 When’s the last time you heard classical music in a club-like environment? Or experienced the Kennedy Center as a nightclub?

“We’re kind of creating a club venue within the Kennedy Center,” says composer Mason Bates. “The top floor is very different from the grand foyer and the Concert Hall with the red carpet and stuff. The Atrium is much more of a warehouse-type space. There are lots of different rooms and couches and bars all over the place.”

Next Monday, Oct. 24, Bates, composer-in-residence at the Kennedy Center, kicks off the second season of his innovative, informal KC Jukebox series with Mercury Soul, a popular San Francisco-based series that merges electronica with classical. “Mercury Soul is a club show that’s invaded by a SWAT team of classical musicians,” says Bates, aka DJ Masonic. “We have DJ sets and then we have classical sets that sort of appear seamlessly out of the DJ sets. We’ve got everything from Bach to Stravinsky to techno to hip-hop, all kind of fluidly integrated into one show.”

Violinist Daniel Bernard Roumain will open the concert and will also perform with Mason over the course of the evening. The performances will be enhanced by immersive lighting and projections, and all throughout the “high-energy classical rave” patrons can mingle and drink.

“For about fifteen years I’ve been DJing in San Francisco and Chicago and integrating electronica into my symphonic music,” Mason says. “About half of my compositions, or a good percentage of them, have electronic sounds — oftentimes techno beats, sometimes more ambient stuff.” Bates has long taken inspiration from George Gershwin, who skillfully integrated jazz and classical a century ago, and more recently from Pink Floyd’s symphonic experiments. But his particular amalgam remains unprecedented. “To be honest, I’ve had to forge my own path, because there really isn’t much precedence for electronic music within the orchestra that’s widely played.”