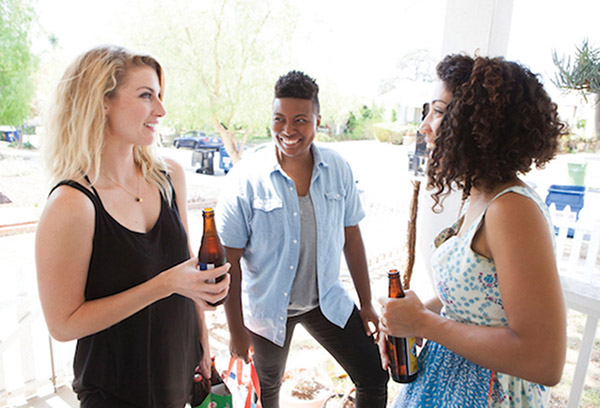 Meeting a partner’s friends in the early days of a relationship is a daunting prospect at the best of times. Most of us, though, can take comfort that we’ve never had an experience like that of new couple Jasmine (Brittani Nichols) and Penny (Lindsay Hicks), who turn up to their friends’ home for lunch and stumble on a cryptic note that Jasmine believes to be a suicide letter. Complicating matters, their hosts Jordan (Brianna Baker) and Billie (Jasika Nicole) are going through problems of their own, despite the facade of married suburban bliss that they present to the world.

The awkward dinner party (well, lunch in this case) has been done many times before, but Suicide Kale brings a refreshing bit of humanity and realism to the trope. When the conversation turns to suicidal thoughts, Penny cheerfully goes along with it, despite her partner Jasmine’s obvious discomfort. Jasmine and Penny steer the conversation into their own relationship problems — a fear of self-absorption that is awkward enough for their hosts, and mortifying for an audience that just minutes ago saw the pair stumble on the suicide note.

Much of the film’s humor hinges on the natural unease inspired by watching two a couple bicker over their own relationship over petty differences while a far more consequential secret lurks in the background. Suicide Kale bets that we will recall a time when a couple we knew argued in front of us, and uncomfortably chuckle along. Of course, Jasmine and Penny are both aware that they may soon have to deliver devastating, even life-altering news to their friends, causing them both a great deal of stress. Their hosts, aware of their guests’ strange behaviour but totally unaware of its source, try with the best of intentions to defuse the tension, unprepared for the bombshell about to be dropped on them.

Brianna Baker’s deadpan performance of Jordan often steals the show, but all four deliver banter that feels highly improvisational, much of it there to simply fill time and be funny between the major plot points. Most of it is slice-of-life fluff that serves little narrative purpose, but this seems to be the point. Suicide Kale never pretends to be more than it is – a charming, lighthearted send-up of relationships and suburbanity.

), you might be forgiven for worrying for their safety — haven’t these two ever seen The Monkey’s Paw? Luckily, this fortune teller seems to be the benevolent kind, despite her sinister air (we never actually see her face). The pair are given visions of their future in the strange woman’s crystal ball. While their present reality is all greyscale, their visions are bright technicolor. The first vision, the more colorful of the two, sees the couple frolicking in a sunny forest. The second is little more than a mundane bus ride, but the two are together and appear happy. While the visions don’t seem to make much sense beyond the vague promise of future happiness together and there is almost no dialogue to clue the audience into their significance, the couple appears satisfied and leaves the fortune teller’s apartment smiling from ear-to-ear. It’s hard not to smile with them at the brief scene of young queer love. It would just be nice to know more of what was actually going on.