Home / Features / The Elephant Has Landed: Donald Trump, Republicans and the Future of Equality

The Elephant Has Landed: Donald Trump, Republicans and the Future of Equality

Donald Trump won the presidency on a platform fueled by bigotry and hate, giving the Republicans ultimate control. Does the future of LGBT rights now hang in the balance? 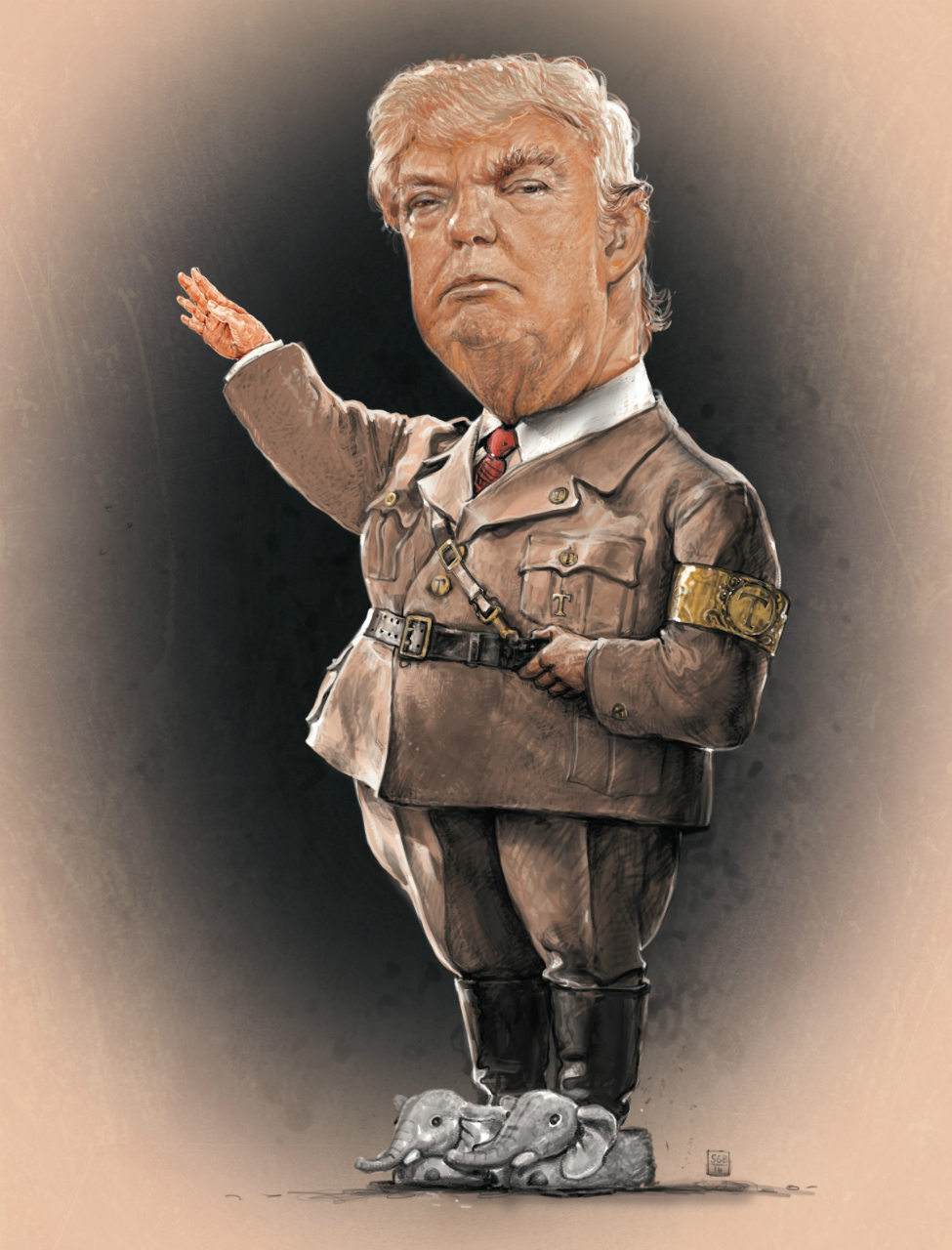 As Town Danceboutique threw open its doors for an election watch party, the mood was festive. People streamed in and out of the nightclub, grabbing a bite to eat at nearby food trucks, ordering rounds of drinks, carousing with friends. As CNN and MSNBC started to call states for either Donald Trump or Hillary Clinton, onlookers cheered a potential Clinton win.

But as the night wore on, with crucial swing states still up in the air, the mood shifted abruptly. Clinton supporters frantically checked their phones, scouring websites for the latest vote tabulations. Some stood frozen, heads bowed, arms crossed, as they anxiously waited for positive news.

And, at 2:30 a.m. on Wednesday morning, Donald J. Trump was declared victorious.

“I’m feeling very anxious, and nervous, and surprised that our country is swinging towards such a hateful candidate,” said 30-year-old Yvette Scorse, a Democrat from Washington, D.C. She watched, despondent, as Clinton’s leads in Pennsylvania and New Hampshire evaporated and Trump pulled ahead in Michigan and Wisconsin.

“I’m feeling anger and disbelief,” said the 32-year-old Washingtonian. “It’s amazing that this is actually even on the screen. Trump was just not a conscientious choice that I think any intelligent human being should make.”

Allen thinks many members of the LGBT community will be “hurting” with Trump as president.

“A lot of people are going to have to volunteer more because the fight is going to intensify,” he said, pointing to the desire of some Trump supporters to reverse the Supreme Court’s marriage equality decision. “It’s going to be anti-everything that we’ve built up until this point. It’s just going to be a full fight.”

Mark Rozanski, a 49-year-old Democrat who lives in Washington, D.C., said that a Trump presidency, along with a Republican-controlled Senate and House, is “very dangerous” for progressive policies and is a threat to major LGBT rights accomplishments.

“Not only has the Republican Party enshrined that in their platform, but many of the people who are most loud in their support of Trump, including Gov. Pence, were hot on the trail to demonize and persecute queers and gay people,” Rozanski said. “Republicans are much more militant about rolling back Obamacare, rolling back queer rights.” 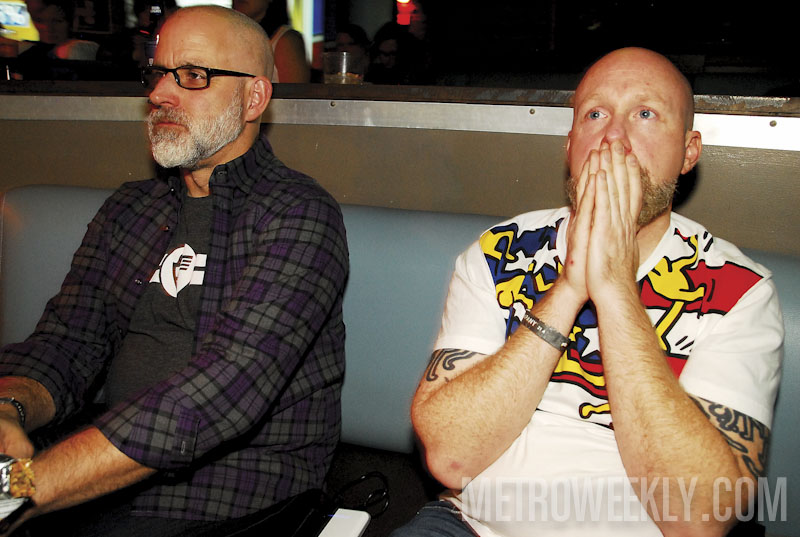 See all the photos from Election Night watch parties here!

With confirmation that Trump would become our 45th president, Cathy Renna, a well-known activist and P.R. specialist, was blunt in her assessment of the future.

“The LGBT community — in all its diversity — has a lot to be worried about. Our new President is a nightmare, but the Vice President is a horror story,” she said in an email. “Forget the advances we anticipated, like employment nondiscrimination. We could see rollback in hard fought LGBT gains like marriage equality. But it is much more basic than that with Pence, a person who believes in conversion therapy.

“The threats to our basic fundamental rights are clear — from ‘religious freedom’ laws to reproductive rights to racial profiling. Our most vulnerable LGBT populations — LGBT homeless youth, seniors, trans and genderqueer people, working class LGBT families, people of color and people with HIV — will suffer the most.”

“Clearly, Clinton is a better choice for LGBT rights,” he acknowledged, adding, “Pence concerns me. If anything were to happen to Trump, I’d be very concerned.”

“I think the LGBT community, in general, is going to be safer under a Trump presidency.” — Joe Murray

Other Republicans were more exuberant in their embrace of a Trump presidency. Joe Murray, a 39-year-old Republican from Oxford, Miss., and founder of LGBTrump, was ecstatic after Trump’s win was confirmed.

“This has been a great election, an election that repudiated the ruling class in Washington, and brought forth real change,” he said in a phone interview the morning after the election. “It’s an election that basically unshackled the country from identity politics and saw a Republican do some really great outreach to minority communities. Did he win those communities outright? No. But he made some serious inroads. And he’s changed the way you have a discussion with those communities in today’s politics.”

Murray expects Trump to be solid on LGBT issues. While he predicts some political posturing from potential Trump Supreme Court nominees on same-sex marriage, he does not foresee the Obergefell decision that legalized marriage equality being reversed. He also expects there will be some debate, eventually resolved by a compromise, over “religious liberty” legislation.

While some LGBT Republicans supported Trump, the Log Cabin Republicans refused to endorse him. Gregory Angelo, the group’s president, is now “enthused but cautious” about a Trump presidency.

“We have, in Donald Trump, someone who is the most pro-LGBT Republican to ever run for the presidency,” he said. “I hope by the time his tenure in office is done, he proves himself to be the most pro-LGBT president in the country’s history. Of course, Log Cabin Republicans will be holding him accountable for his promises, also making sure that the advances we have made in LGBT freedom over the last several decades are not only preserved but actually grow over the course of his administration.”

With Republicans retaining control of the Senate, Angelo also sees opportunities for Log Cabin and other groups to work with a Trump administration to build upon gains for the LGBT community. In lieu of the Equality Act, for instance, Angelo believes that a compromise providing federal nondiscrimination protections with reasonable religious exemptions can be achieved. Log Cabin also intends to push Trump to maintain President Obama’s executive order prohibiting discrimination in federal contracting. And he says an oft-repeated refrain that marriage equality could be at stake under a Trump presidency fails to hold up under scrutiny.

“I do not lose any sleep at night worrying about losing marriage equality in the U.S., because there is no hypothetical that can be proposed where an individual could achieve standing in the nation’s highest court because of a claim that the existence of same-sex marriage harms them,” says Angelo. Even most social conservatives who opposed the Obergefell case show “very little appetite” to re-litigate the issue.

“This is a bogeyman of the Left’s creation,” said Angelo. “Hillary Clinton ran a divisive campaign threatening that the Supreme Court could overturn civil marriage equality unless she was elected president. And that’s simply not the case…. Democrats tried to push social issues including divisions on marriage equality as a way to play the identity politics game. They clearly failed last night.”

In fact, a Trump administration could be highly supportive of LGBT rights, noted Christopher Barron, of LGBT for Trump. He says people need only look to Trump’s record in the private sector when it comes to whether his policies will be LGBT-inclusive.

“What we can expect is a continuation of what we’ve seen throughout Mr. Trump’s entire life,” said Barron following the election. “Donald Trump has a long record in his business life of pro-LGBT policies in companies he runs. He has hired and promoted LGBT people, he’s offered domestic partner benefits, he’s run companies that have great nondiscrimination policies toward LGBT Americans. I think we’re going to see pro-LGBT policies that Mr. Trump pursued in the business world.”

“I’m devastated that so many Americans voted for a candidate who is clearly anti-American values and anti-equality.” — Aisha Moodie-Mills

Nevertheless, prominent LGBT rights organizations characterized Trump’s election as a setback and are already rallying disheartened supporters to brace for a fight.

“This is a crucial moment for our nation and for the LGBTQ movement,” Chad Griffin, president of the Human Rights Campaign, said in a statement. “The election of a man who stands opposed to our most fundamental values has left us all stunned. There will be time to analyze the results of this election, but we cannot afford to dwell.

“Over the last 18 months, Donald Trump and Mike Pence have intentionally sowed fear and division for cynical political purposes,” he wrote. “They now face a decision about whether they will also govern that way. We hope, for the sake of our nation and our diverse community — which includes women, people of color, those with disabilities, immigrants, and people of all faiths and traditions — they will choose a different path.”

Rea Carey, executive director of the National LGBTQ Task Force, said that Trump’s election leaves many “disappointed and frightened.” It also offers LGBT advocates an opportunity to bounce back stronger than before.

“Make no mistake about it, this will give us a roadmap for fair-minded, moral, compassionate people to come together like never before and fight,” Carey said. “It will take longer, it will be harder, but rest assured that united and working in partnership with people of good conscience, we will get there.”

“I’m devastated that so many Americans voted for a candidate who is clearly anti-American values and anti-equality,” says Aisha Moodie-Mills, president and CEO of the nonpartisan Gay and Lesbian Victory Fund. “I am extremely disappointed that this is where we find ourselves.”

Moodie-Mills is unsure of what exactly Trump’s presidency might mean for the LGBT community, pointing to his volatility and his contradictory actions of trying to court LGBT voters while also promising social conservatives that he will help push their agenda.

“He’s said that he would want to repeal marriage equality nationwide,” said Moodie-Mills. “He has said he supported HB 2 in theory. He has Mike Pence as his vice president, whose record in Indiana shows that he’s all about doubling down on discrimination, specifically against the LGBT community. So if we look at their record, and their words, we certainly know that we do not have friends in them. They have proven they are not reliable partners in working towards fairness and equality for all.”

But she’s also optimistic that the LGBT community can regroup, pointing to the 2004 election and the success of many ballot initiatives to ban same-sex marriage as an example of how the community redoubled its efforts. Losing an election does not absolve the community from continuing to hold the new administration and its allies in Congress accountable.

“We cannot sit idly by and allow them to run amok as if we’re not paying attention,” she said. “Now is not the time to be so disappointed that we pack up our bags and become disenchanted with the process.

“Democracy is a process. And the beauty of our country is that there’s the opportunity for all of us to participate, and to elect our leaders, and hold our leaders accountable. So the movement’s priority should be showing up in full force every day, continuing to do the work that we need to do to move equality forward.”

Now Read: No Returns: With Trump, America Made a Bad Choice

John Riley is the local news reporter for Metro Weekly. He can be reached at jriley@metroweekly.com
← Previous Story New Jersey congressman defeated over anti-gay remarks
Next Story → Post-Election LGBT Survey: Share your thoughts about the election of President Trump