Home / News + Politics / From the Editor / No Returns: With Trump, America Made a Bad Choice

No Returns: With Trump, America Made a Bad Choice

By Randy Shulman on November 9, 2016 @RandyShulman 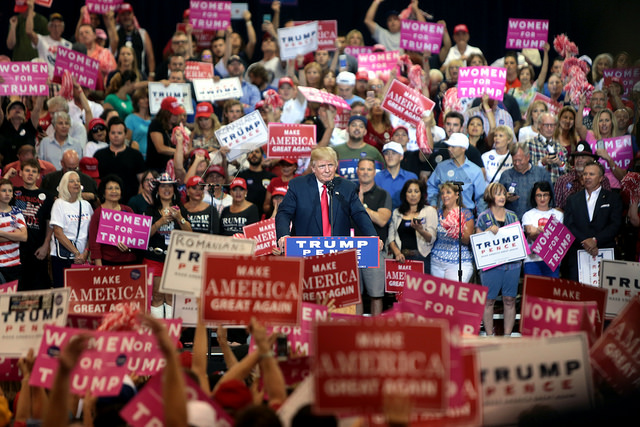 Donald Trump is the greatest salesman alive. And America has just purchased his horrific bill of goods.

Not all of America, mind you, but enough to secure the businessman and television reality star’s place as the 45th President of the United States. And that, people, is a grim prospect — not just for the LGBT community, but for everyone in our country. And, likely, the world.

I don’t feel the need to be especially conciliatory or gracious about a Trump win. I didn’t support him. I don’t support him. I’m stuck with him as my president and Metro Weekly will cover his administration fairly. But while I have to accept the fact that this charlatan — who refused to show his taxes, who mocked the disabled, who has hinted at limiting the powers of the press, who has espoused racism, misogyny and hate at every possible turn, who has encouraged violence — is now our Commander-in-Chief, he’ll never truly be my president and will never truly speak for me. It’s the same way I felt about Reagan. And Bush. And Bush again. Though to a much lesser extent, as I didn’t feel that they had the power to leave the country in unrepairable shambles. Not the way President Trump could. 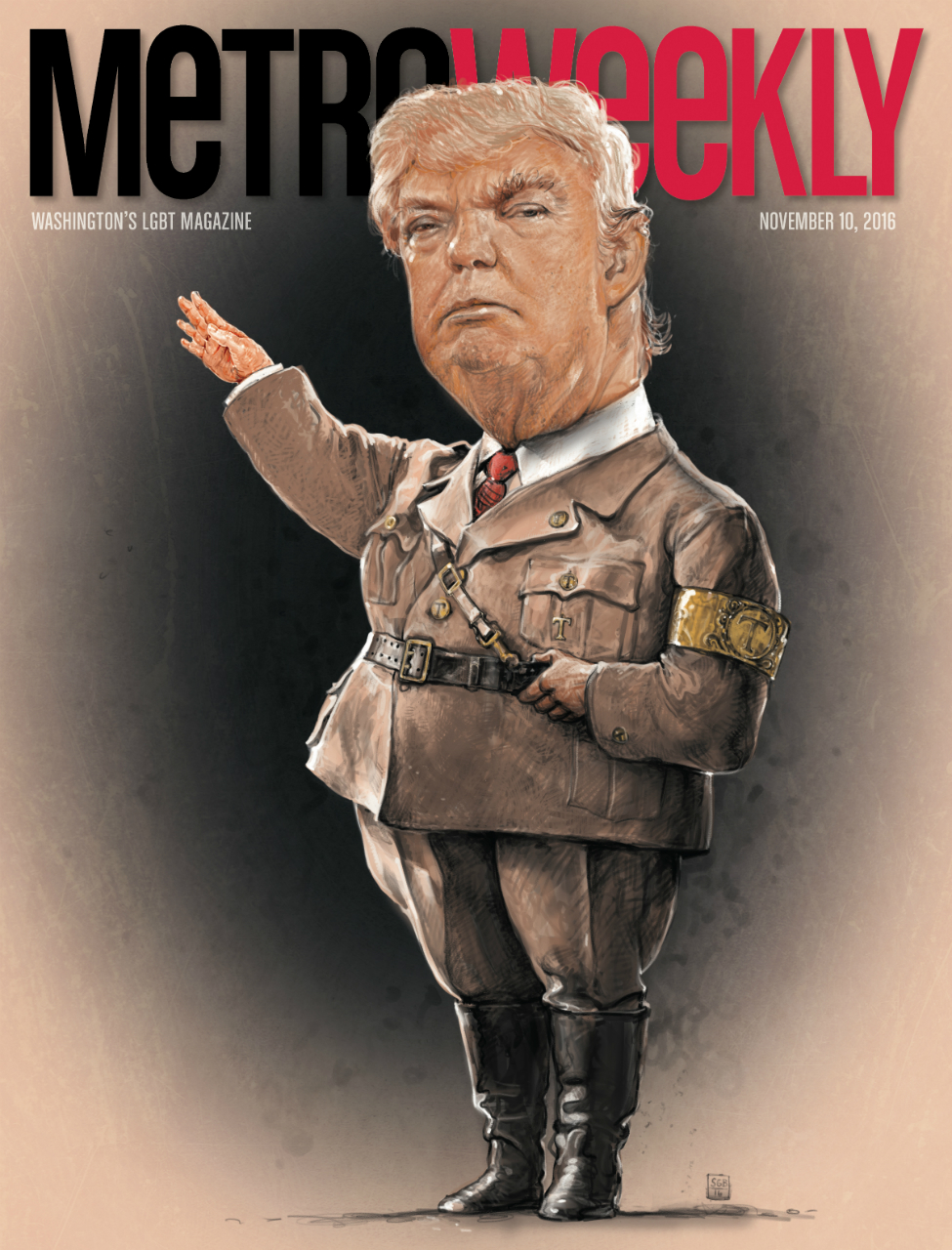 I’m still trying to process what just happened, as many of us are. Like many other Democrats who supported Hillary Clinton, despite her very human flaws, I felt she would be a leader who would govern with strength, grace, determination and intelligence. Someone who would command the respect of the world’s leaders. Someone who would open the pathway for future woman presidents. I went into Tuesday night thinking she was a shoo-in. It certainly seemed that way as the polls started trickling in.

And then things changed, swiftly, and a nightmare took hold. One by one, states fell to Trump. It was a brutal, red bloodbath. At 1:30 a.m., I turned off the television and presumed I’d either wake up to what appeared to be inevitable — a Trump win — or a miracle. I woke to the former.

Still, it was a confluence of everything — including third-party siphoning (Johnson, especially, should have done the honorable thing and withdrawn for the good of our country, throwing his support to Clinton), her massively perceived untrustworthiness, her email server, her campaign’s arrogance in taking voters in Michigan and Wisconsin for granted, the fact that Trump tapped into a mood and a movement that rose from burning white ashes. Trump supported and encouraged a white nationalism that is genuinely frightening on its surface, one that doesn’t get its news from the New Yorker or Washington Post, but rather ascribes to the likes of Breitbart and Limbaugh and a host of others who stoke hate, fear, and loathing in the hearts of their rabid followers. Already, there are reported sightings of people in Florida carrying signs that read, “America is White Again.” Welcome to the U.S.K.K.K.

It’s not just the ascent of Donald Trump that troubles me. It’s the coattail rise of Vice President-elect, Mike Pence, a man who proclaims to be a Christian but has all the tolerance and respect of a piranha in a lake filled with wounded people. The LGBT community, which made such astonishing strides under Barack Obama, is in very real danger of losing hard won ground. I fully expect Trump, Pence and the Republican-controlled House and Senate to wreak havoc on the LGBT community, with particular sights set on the transgender community and same-sex marriage. (Please do not retire, Justice Ginsburg. Stay where you are.) 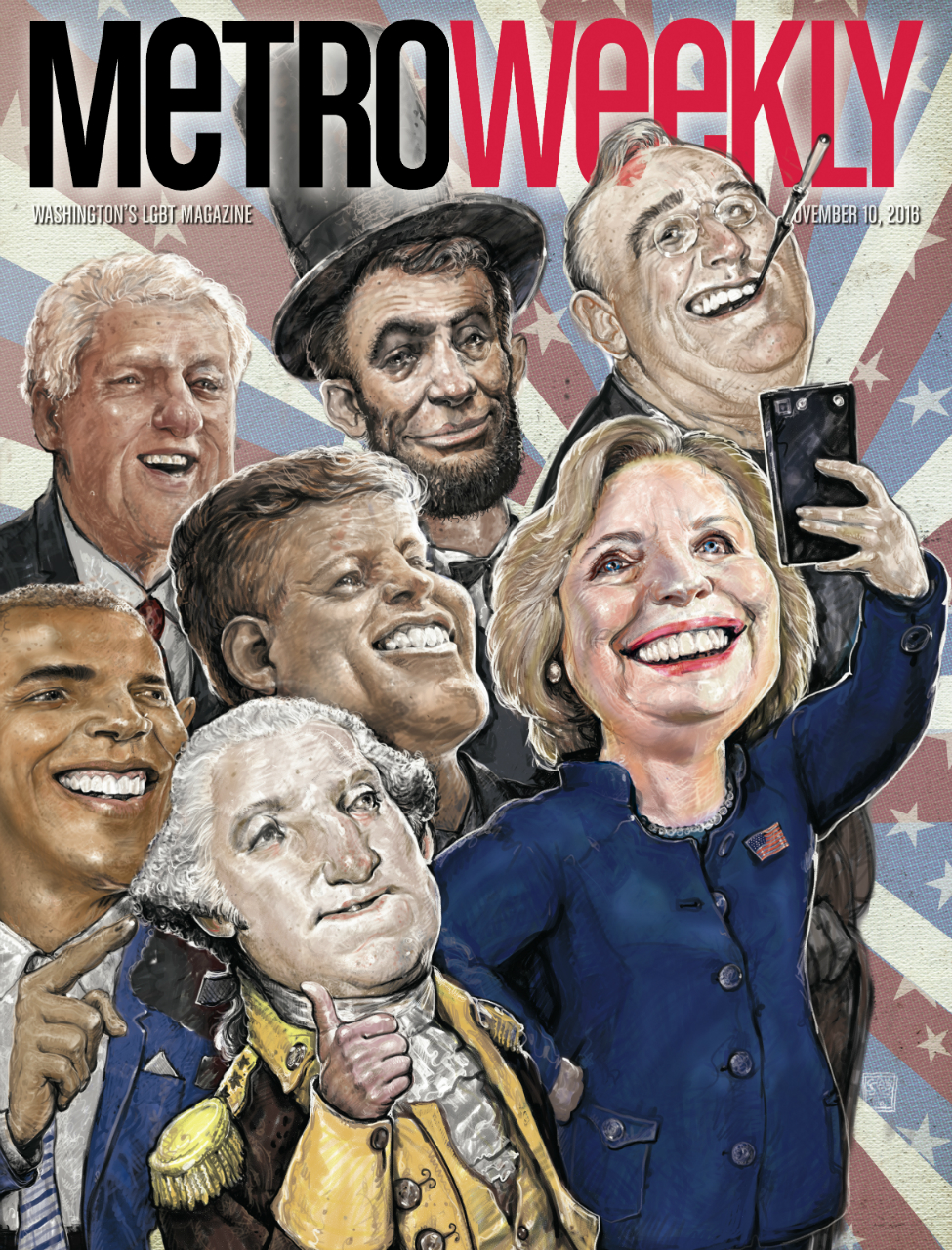 The cover we wish we’d been able to use, Illustration by Scott G. Brooks

Here at the magazine, we had to prepare for either outcome. We worked with our longtime contributing illustrator Scott G. Brooks to arrive at two potential covers. Scott created a stunner that would have celebrated Hillary Clinton’s historic place in the pantheon of presidents. It was the one we presumed we’d go with and you can see what might have been on page 31.

Instead, we went with the alternative, one that gives rise to the grim fear that we’ve just handed our country to as close to a demagogue as we’ve ever come. Will Donald Trump irreparably harm our democracy? Time will tell, but he certainly won’t do much to fix what is already clearly broken.

I can only hope that we’re all wrong about him. Doubtful, because Donald Trump is a salesman of the cheapest kind. I suspect those who voted for him are going to find out that, as with every other political figure, he’s offered little more than hot air. He is the very epitome of self-involved, self-aggrandizing bluster.

We are all — Trump supporters and detractors — about to have a reality check. And it won’t be pretty.

The Elephant Has Landed: Donald Trump, Republicans and the Future of Equality

Randy Shulman is Metro Weekly's Publisher and Editor-in-Chief. He can be reached at rshulman@metroweekly.com.
← Previous Story An Endorsement for Hillary Clinton: We’re With Her
Next Story → Hell to the Chief: Don’t celebrate Trump, but don’t ignore him either