"I’m hopeful that he’s not actually a racist, and that he just used racist rhetoric to court voters" 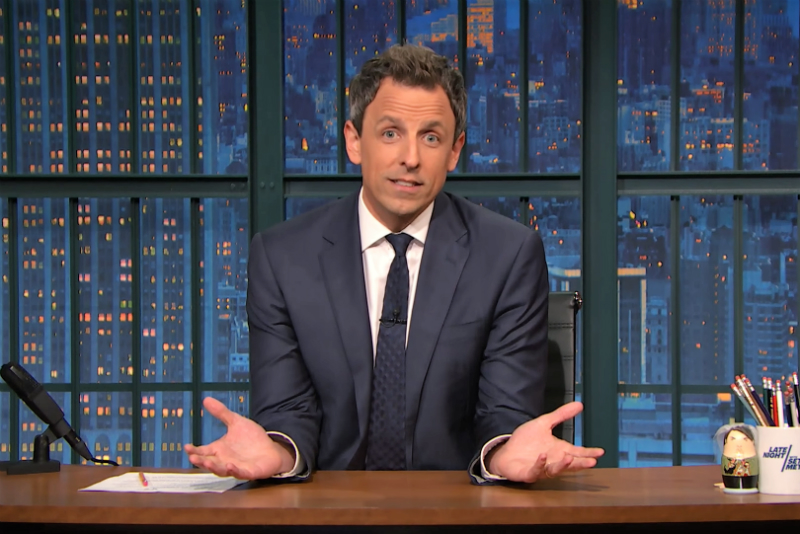 Late night hosts face a particularly troublesome task at the moment. How do you fulfill your job — namely, to put the country to bed with a smile on their face — when at least half of the population feels stuck in a perpetual nightmare?

The stunning election of Donald Trump as the nation’s forty-fifth president evoked a number of reactions across the late night landscape, as the various hosts tried to find the words to best sum up a situation that’s confusing at best, horrifying at worst.

Seth Meyers perhaps best captured the mood of many on Late Night with Seth Meyers.

“Well, that was a real grab in the pussy,” Meyers said during his opening monologue. “I’m sorry to use foul language like that, but last I checked the electoral college seems to be fine with it.”

Meyers later delved into his feelings about Trump’s win.

“I felt a lot of emotions last night and into today — some sadness, some anger, some fear,” he said. “But I’m also aware that those are the same emotions a lot of Trump supporters felt, emotions that led them to make their choice. And it would be wrong for me to think my emotions are somehow more authentic than their emotions.

“I would just say to those Trump voters: Congratulations. I sincerely hope he addresses your concerns. I sincerely hope that if you’ve felt forgotten, he won’t forget you now. As a white man, I also know that any emotions that I’m feeling are likely a fraction of those being felt by the LGBTQ community, African-Americans, Hispanic Americans, Muslim Americans and any number of the immigrant communities so vital to our country. Hopefully the Trump administration will be compassionate to them.”

Meyers also touched upon the fact that Trump’s positions on the issues have changed multiple times, saying that “he has, at any given point, held every position on every issue. He’s been pro-choice, pro-life, for the Iraq War, against the Iraq War. Pretty much his only consistent position has been anti-Rosie O’Donnell.”

“I’m hopeful that he’s not actually a racist, and that he just used racist rhetoric to court voters,” he said.

Samantha Bee, who championed Clinton’s campaign, used her deeply incisive humor to deconstruct Tuesday night’s events. Discussing Trump’s overwhelming support from white men and women, Bee remarked: “I don’t want to hear a goddamn word about black voter turnout — how many times do we expect black people to build our country for us?”

She also compared Trump’s election to the political equivalent of installing an above ground pool.

“Even if we’re lucky and it doesn’t seep into our foundation, the neighbors will never look at us the same way again,” Bee said.

She then turned her attention to the next four years.

“Let’s get off the floor and get busy,” Bee quipped. “Especially you, white women. We’ve got some karma to work off.”

James Corden tried to bring the nation together during the Late Late Show.

“[America] is a country of opportunity, and diversity and hope,” he said. “And that will never change. This is still the land of liberty. It put people on the moon. It’s the Chicago Cubs, Michael Jordan. It’s the land of tacos, and yes, and yes, tacos are Mexican, but that doesn’t mean they don’t belong here.”

He also affirmed that Trump’s win didn’t have to mean that the values and divisiveness of his campaign should become the norm.

“This country isn’t about one election result,” he said. “This country is about the people who live here. It’s you. It’s how you treat one another. It’s the tone you set that will define who we are.”

Before Corden, Stephen Colbert looked more than a little defeated during The Late Show.

“I am so glad to be with you tonight,” he said. “I wouldn’t want to be alone right now.”

“There’s no way around it,” Colbert continued. “This is what it feels like when America’s made great again. I was wondering and I was really hoping it would feel better ‘cause this sucks.”

Like many, he was still struggling with the fact that Trump was now President-elect Trump.

“I just want to keep saying it until I can say it without throwing up in my mouth a little bit.”

If you need a little more escapism before reality brings you crashing back down again, watch Samantha Bee’s “Dream” segment — a celebration that, despite the end result, the seemingly never-ending 2016 campaign is finally over.

Rhuaridh Marr is Metro Weekly's online editor. He can be reached at rmarr@metroweekly.com.
← Previous Story Fox’s “Rocky Horror Picture Show” is a waste of your time
Next Story → Spotlight: Imelda Staunton in Gypsy tonight on PBS