Schuyler Bailar's story of coming out as a transgender man and being embraced by his teammates is nothing short of compelling.

By John Riley on November 10, 2016 @JohnAndresRiley 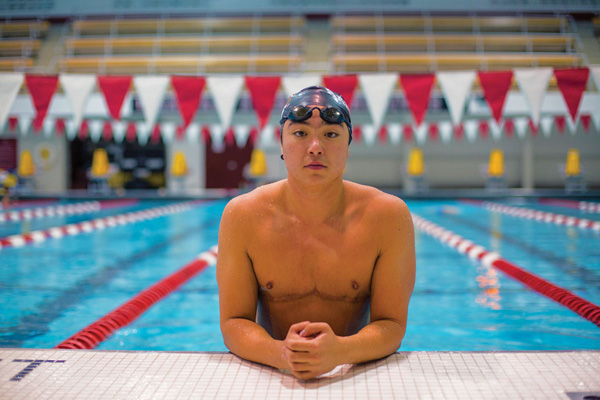 Schuyler Bailar doesn’t quite know yet what he’ll say when giving the keynote address at this Sunday’s SMYAL Fall Brunch. “I haven’t written the speech yet,” admits the Harvard University student-athlete, adding, “I like to go off the cuff most of the time.”

He has plenty of material to draw from. Bailar’s story of coming out as a transgender man and being embraced by his teammates is nothing short of compelling. His openness about his personal journey has elevated him to the status of public advocate, snagging him high-profile appearances on 60 Minutes and Ellen.

Raised in McLean, Va., Bailar knew of SMYAL’s existence growing up, but didn’t have much interaction with it, in part because he wasn’t out at the time. But he points to SMYAL and similar organizations as essential to LGBT youth coming to terms with their sexual orientation or gender identity.

“The [organization] I interacted with the most was a place called the YES Institute in Miami,” Bailar says. “That was lifesaving. They gave me a place to go by male pronouns for the first time in my life, even though I hadn’t really physically transitioned or done anything to change my body. I just went there, and they said, ‘If you think you’re trans, why not? We’ll call you male pronouns for a week or so and you can see how it feels.’

“It was one of the most accepting places, and it was where I could try on this persona that I wasn’t sure matched me yet. They were the first place that put humanity into the word ‘transgender.’ I think these kinds of places are huge for people. They’re refuges. They’re places of learning. They’re advocacy spaces, and safe zones.”

Bailar will be presented with SMYAL’s Community Advocate Award at the brunch.

“For me, it’s not really an award in the sense that I ‘won’ something,” he says. “I think the ‘winning’ is kids living authentically — and I mean actually living, because the suicide rate for LGBTQ youth is ridiculously high, compared to non-LGBTQ people…. So this isn’t about winning. It’s about kids continuing to live, and being themselves, and expressing themselves authentically.”

John Riley is the local news reporter for Metro Weekly. He can be reached at jriley@metroweekly.com
← Previous Story Gal Uchovsky to speak at Jewish Federation of Greater Washington’s “Imagine Israel” event
Next Story → Walk & 5K To End HIV Celebrates 30 Years