Stance on LGBT rights is unclear, but both she and her family have donated to anti-LGBT organizations

By John Riley on November 29, 2016 @JohnAndresRiley 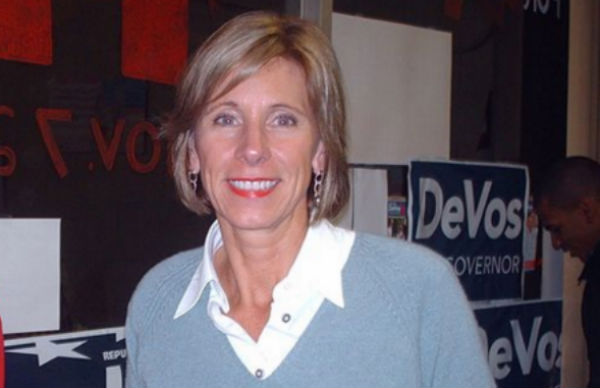 LGBT record: Personally donated to Focus on the Family, an organization opposing LGBT rights and pushing the practice of conversion therapy. While her personal views on LGBT issues are unknown, her family members have donated significant amounts of money to a host of anti-equality organizations.

LGBT advocates are concerned with what they see as “red flags” being raised by President-elect Donald Trump’s selection of billionaire “school choice” advocate and longtime GOP donor Betsy DeVos to be the next Secretary of Education.

DeVos’ personal views on LGBT issues are largely unknown, but her family has a long history of  donating to anti-gay institutions or causes. DeVos and her husband, Dick DeVos — who unsuccessfully ran for governor of Michigan in 2006 — have donated to Focus on the Family, a conservative Christian group that opposes the expansion of LGBT rights and has been influential in pushing conversion therapy to “cure” or curb the behavior of LGBT-identifying people.

According to Politico, DeVos’ late father, Edgar Prince, and her husband’s family have donated to the Family Research Council and Alliance Defending Freedom, two other organizations opposed to LGBT rights. Other family members have donated money to campaigns seeking to ban same-sex couples from marrying in Michigan, Florida and California. This financial support has left some advocates concerned about what tack a DeVos-led Education Department would take, particularly with respect to the Obama administration’s guidance on the treatment of transgender students and whether they are protected under Title IX.

For some, the pick of DeVos was a non-starter. The National Center for Transgender Equality issued a statement calling on Trump to rescind the nomination, and, if he does not, for the U.S. Senate to reject her nomination.

“The policies DeVos has devoted her career to … funnel taxpayer funds to religious schools that can be hostile environments for young people who are different,” NCTE said in a statement. “DeVos and her family’s foundations also have a long and troubling history of supporting anti-LGBT hate groups that spread myths and lies about transgender people, and funding conferences promoting the harmful quack science of ‘conversion therapy,’ or trying to change a person’s gender identity or sexual orientation.”

But Stephanie White, the executive director of Equality Michigan, told Politico that she believes DeVos’ views on LGBT issues has evolved. She said that DeVos doesn’t speak out against LGBT rights, and even called on Dave Agema, a Michigan Republican National Committee member, to step down from the RNC in 2014 after making disparaging comments about gays.

“She’s shown a capacity to grow in her understanding of LGBT issues,” White said of DeVos.

But other advocates aren’t assuaged by those arguments.

Chad Griffin, the president of the Human Rights Campaign, called DeVos’ ties to groups that promote conversion therapy “most alarming,” and called on the nominee to clarify her stance on the practice.

“If Betsy DeVos is to serve as our nation’s Secretary of Education, she must clarify whether she shares her family’s support for this abusive practice, or if she’ll pledge to work to ban it,” Griffin said in a statement.

“We are deeply concerned by the nomination of Betsy DeVos for U.S. Secretary of Education,” Eliza Byard, the executive director of GLSEN, said in a statement. “GLSEN is committed to the principle that all students have a right to high-quality public education free from discrimination. DeVos’ record of advocacy for vouchers and tuition tax credits represents a rejection of that principle. We have seen time and time again that so-called ‘school choice’ undercuts civil-rights enforcement and drains public education systems of desperately needed funds.

“As we have seen over the past eight years, federal civil rights oversight of education is essential to ensure that all students in this country have real access to opportunity,” Byard added. “There is so much to be celebrated in the civil rights gains made during the Obama Administration. As a nation, we must build on that legacy. … [W]e call upon DeVos to join us in moving forward.”