Tom Price has a long history of opposing LGBT rights

By John Riley on November 21, 2016 @JohnAndresRiley 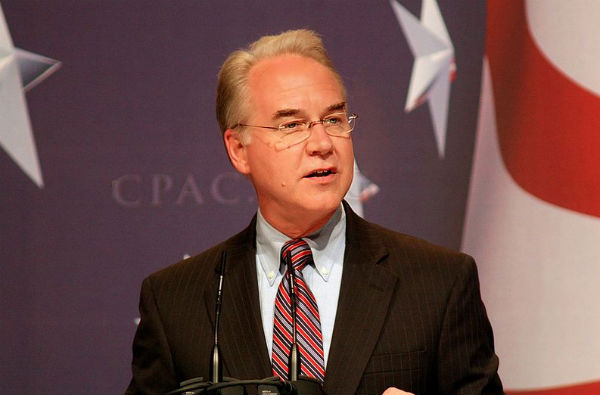 Another day, another anti-LGBT person floated for Donald Trump’s cabinet.

President-elect Trump is reportedly favoring U.S. Rep. Tom Price (R-Ga.) for the position of secretary of Health and Human Services, reports Politico. Price, a physician who represents the conservative suburbs of Atlanta, has established himself as one of the chief opponents of the Affordable Care Act, which Republicans are hoping to dismantle.

Price has also accrued a vehemently anti-LGBT voting record during his six terms in Congress. He boasts a 0% rating for the 114th session and for his lifetime voting record on the Human Rights Campaign’s congressional scorecard.

He voted against an LGBT-inclusive version of the Violence Against Women Act, against the Employment Non-Discrimination Act, and against including anti-LGBT crimes under the federal hate crimes statute.

In a statement issued after the Supreme Court legalized marriage equality, Price lamented the fact that states with constitutional amendments banning same-sex marriage — like Georgia — would no longer be able to exclude gay and lesbian couples from obtaining marriage licenses.

“Today’s ruling by the Supreme Court serves only as further encouragement to use the court system as a systematic springboard to enact agendas outside the democratic and legislative structures of government,” he said in a statement. “Thirty States have held statewide ballots banning gay marriage since the year 2000, and yet legislating from the bench has superseded both public approval and our elected representatives. This is not only a sad day for marriage, but a further judicial destruction of our entire system of checks and balances.”

According to Right Wing Watch, Price appeared on a 2013 conference call with the right-wing group Tea Party Unity, and agreed with Rabbi Noson Leiter — best known for blaming Hurricane Sandy on New York State’s marriage equality law — that any bill involving social issues should require a study of the “fiscal impact” that the legislation could have. Relying on age-old stereotypes of LGBT people as vectors for disease, Leiter asked if lawmakers should consider the “tremendous medical health impact” and economic impact before promoting homosexuality as an acceptable lifestyle.

Price responded that the financial costs of treating those health problems that stem from homosexuality could place greater strain on state budgets.

“The consequences of activity that has been seen as outside the norm are real and must be explored completely and in their entirety prior to moving forward with any social legislation that would alter things,” he said. “I’m always struck by people who wake up one morning and think that they’ve got a grand new way of doing something when as you all know that the tried and true traditions in history that made us great are preserved and have survived because they are effective.”

John Riley is the local news reporter for Metro Weekly. He can be reached at jriley@metroweekly.com
← Previous Story Trump’s national security adviser opposes transgender military service
Next Story → Texas bill could force teachers to out LGBT students to their parents