Anonymous neighbor wrote a letter objecting to one woman's Pride flag, so other neighbors followed suit 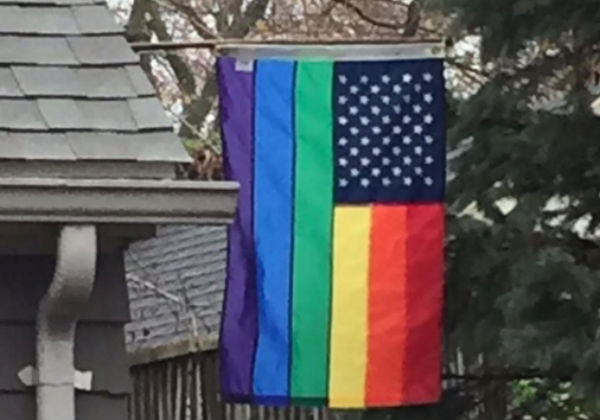 A group of neighbors in Ann Arbor, Mich., are flying rainbow flags after one of their fellow neighbors got an anonymous letter from someone complaining about her decision to fly the rainbow flag on her own property.

Susan Pearlman, whose daughter is a lesbian, has been flying the rainbow flag ever since the Orlando massacre at Pulse nightclub in June. But Pearlman received an anonymous letter from someone alleging to be from the neighborhood who objected to the flag.

The letter, which was published by Mashable, read: “I was enjoying a walk through the neighborhood today and noticed the flag in your front yard. I wanted to express to you that the flag deeply troubled me. I was troubled by the rainbow version of the American flag because it overlooks so many things the original American flag represents.”

The letter continued, with the neighbor writing, “The flag is missing the white stripes that represent purity and innocence. … Our flag is a sacred representation of our country’s history that we are so blessed to be a part of.” The neighbor asked Pearlman to put up an American flag beside the rainbow one.

Pearlman told a couple of close friends and neighbors about the letter. One of those neighbors read the letter and asked where they could purchase a flag. Several others agreed to do the same. As a result, there are 20 flags flying along the street.

Pearlman shared her story on Pantsuit Nation, a secret Facebook group of former Hillary Clinton supporters, and received over 32,000 likes.