By John Riley on December 5, 2016 @JohnAndresRiley 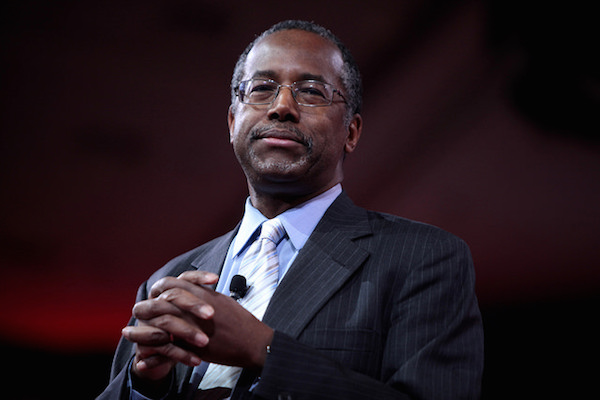 LGBT record: As a presidential candidate, opposed LGBT rights, including the right to marry. Has made a number of inflammatory statements that are anti-LGBT, opposing gay marriage, transgender rights, and homosexuality in general. As a candidate, said he would be willing to reinstate the military’s “Don’t Ask, Don’t Tell” policy.

Despite communicating through a surrogate that he was not interested in serving in a Trump administration, and that he reportedly felt he did not have enough experience to run a federal government agency, former GOP presidential candidate Ben Carson has been selected as President-elect Donald Trump’s top pick to run the Department of Housing and Urban Development.

“Ben Carson has a brilliant mind and is passionate about strengthening communities and families within those communities, ” Trump said in a statement Monday morning. “We have talked at length about my urban renewal agenda and our message of economic revival, very much including our inner cities. Ben shares my optimism about the future of our country and is part of ensuring that this is a presidency representing all Americans.”

Carson, a retired neurosurgeon, was one of a handful of presidential candidates, including Trump, who pursued the Republican nomination despite not having served in elective office. During his campaign, Carson established himself as a doctrinaire social conservative with a host of anti-LGBT views and a penchant for statements that were not only politically incorrect but often rife with hostility to those who do not share his religious beliefs.

Some of Carson’s most memorable statements have included a contention that same-sex behavior exhibited by inmates in prison proves that homosexuality is a choice, that gay marriage was responsible for the fall of Rome, that the LGBT rights movement has unfairly attempted to equate itself with the Civil Rights Movement, and that transgender people cannot change their assigned gender at birth any more than they can change their ethnicity.

According to The New York Times, Carson will oversee an agency with a $47 billion budget and is expected to bring a philosophical opposition to any government programs that encourage dependency. Even in his autobiography, Carson has stressed that individual effort, not government programs, were the key to his ability to overcome the poverty he experienced as a child. That could prove interesting in a department that oversees housing voucher and rental assistance programs for low-income families.

Given Carson’s parochial views on gender, one of the likely targets of a Carson-run HUD may be a recent update to the department’s Equal Access Rule for shelters. Under the new rule, adopted in September, shelters that operate single-sex facilities or sex-specific projects must provide all individuals, including transgender and gender nonconforming people, with access to programs, benefits, services and accommodations based on their gender identity. Under the rule, shelter providers are not allowed to subject applicants to intrusive questioning about their gender identity or ask for documentation to “prove” one’s gender.