Bowser to meet in person with Donald Trump on Tuesday

D.C. Mayor expected to lobby president-elect on statehood and respecting District's ability to govern itself

By John Riley on December 6, 2016 @JohnAndresRiley 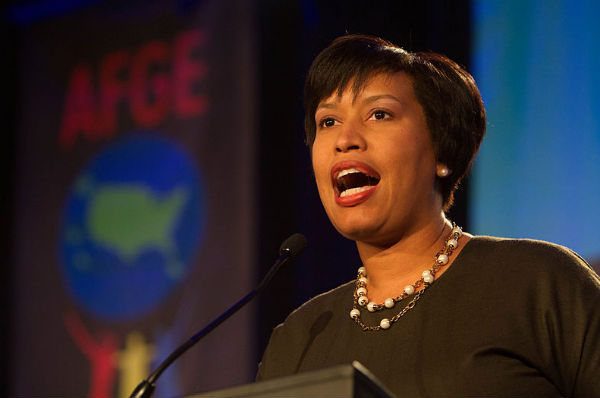 Mayor Muriel Bowser is scheduled to meet with President-elect Donald Trump in New York on Tuesday morning. As part of the meeting, which is closed to press, Bowser and Trump are expected to discuss issues pertinent to the District of Columbia, including its bid for statehood, and the importance of keeping Congress out of the District’s affairs.

“Washington, DC has passed 21 consecutive budgets, has a healthy cash reserve, a falling unemployment rate, improving schools, our population grows by nearly 1,000 per month, as well as record numbers of visitors and business interests looking to invest in Washington, DC from around the world,” the mayor added. “We have an opportunity to continue this growth in partnership with the next Administration, and I look forward to sharing our priorities with the President-Elect.”

Every year, the Republican-led Congress appears to dream up some rider to a budget bill that seeks to prohibit the Democratic-leaning District from spending its own tax revenue as it sees fit, or some bill that seeks to undermine or repeal a law that’s been duly passed by the D.C. Council and signed by the mayor. Under the Home Rule Act, every piece of legislation approved by the District must undergo a 30-day review period by Congress.

At a recent Transgender Day of Remembrance event, Bowser sought to calm the nerves of transgender and LGB residents nervous about the prospect of a Trump presidency by vowing to defend the District’s values. She raised the prospect that the federal government could attempt to deny the District federal funds in response to actions taken by the Council and her office, such as the Death with Dignity Act, which allows terminally ill patients to end their lives via doctor-assisted suicide.

On another front, Bowser said the Metropolitan Police Department will not ask people about their immigration status, in keeping with the District’s position as a sanctuary city — something over which she expects to butt heads with the incoming administration.

“We as a government have to stand united on the things that are so important to us and speak with one voice,” Bowser said. “Our job is to be prepared for whatever. There are real threats against our human rights, civil rights, against people’s perceptions and feelings about their personal safety.”

Bowser promised the District would be prepared to respond to federal interference, to use its own locally-generated tax revenue to fund programs or initiatives that are likely to be cut under a Republican president and a Republican-controlled Congress, particularly those serving vulnerable communities such as LGBT people or people living with HIV.

“That may mean we have to use our money differently. Because if [Trump] rolls back the Affordable Care Act, real Washingtonians with real illnesses will not have insurance. And that will mean we will have to use real local dollars, in the hundreds of millions of dollars, to make up the difference.

“If he decides that sanctuary cities like us will lose federal funding, then that may mean education dollars, public housing dollars, community development block grant dollars could vanish,” Bowser added. “There’s going to be an issue — maybe Death with Dignity, maybe the Affordable Care Act. I’m not sure what it’s going to be, but it is going to be an issue, a real threat to Washington, D.C. … We all have to stand ready to defend the values that are Washington, D.C. We are who we are. And Election Night didn’t change it.”