Fiasco Theater’s “Into the Woods” (review): A journey worth taking

An unfussy, unpretentious, minimalist approach, Fiasco's Into The Woods is a journey well-worth taking

By Doug Rule on December 15, 2016 @https://twitter.com/ruleonwriting 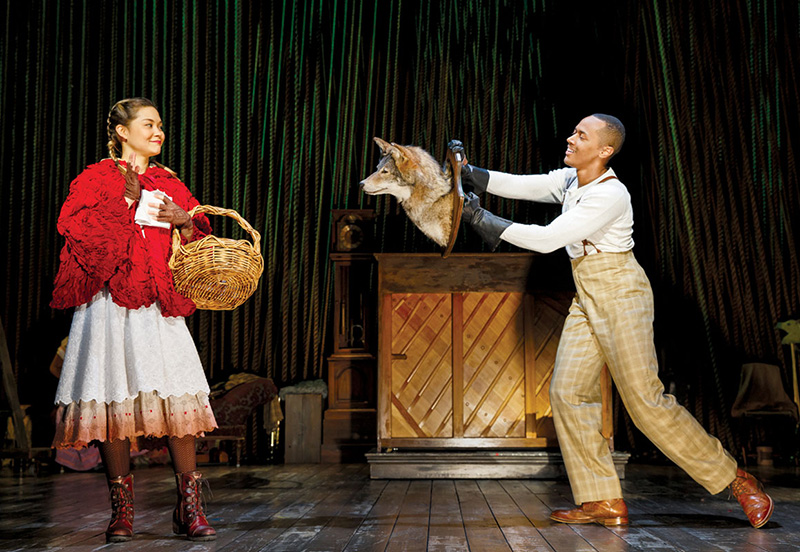 Into the Woods — Photo: Joan Marcus

You know what the Fiasco Theater’s stripped-down approach to Into The Woods is missing? A full-fledged pit orchestra. You might wish for a little more musical oomph and flourish to enhance the show’s by-now familiar tunes, and the extraordinary, extended multi-song Prologue/Finale numbers bookending each act lose resonance without the typical multi-instrument accompaniment. Still, it’s surprising how effective the 10-member Fiasco ensemble is at pulling double duty, performing as supporting musicians off to the sides of the stage when not moving around the Eisenhower Theater as actors. Music Director Evan Rees is the one musical constant, a near-constant presence on upright piano — though constant does not mean stationary. Rees, too, moves all around, performing at a piano on wheels that doubles as a key prop.

Actors doubling as musicians was the same approach taken by Once, the Tony-winning musical that played the Eisenhower last year. But Once is about a group of musicians pursuing their dreams of writing and performing pop and folk music, so having the actors also play instruments makes intuitive sense. It doesn’t for Into The Woods (

), the musical co-written by Stephen Sondheim and James Lapine set in the wild, verdant land of fairy tales, a place where classic characters dream of a better life. And yet Fiasco makes it work, chiefly by sheer virtue of its actor-driven approach, in which the score becomes just another tool in the actor’s toolbox.

It’s an audacious approach, the upstart New York company’s unfussy, unpretentious staging of Into The Woods. Fiasco directors Noah Brody and Ben Steinfeld totally rethink the musical from top to bottom. In addition to cutting the orchestra for a more immediate, immersive musical approach, Whitney Locher’s costumes are evocative, whimsical and mostly unshowy. It’s a minimal, stripped Into The Woods in all aspects of design, right down to Derek McLane’s bare bones, utilitarian set, featuring the kind of items you might find in a grandparent’s attic, as well as a backdrop of ropes and images of musical notes.

And yet, you don’t miss all the lavish showboating. Fiasco was started a few years ago by a young troupe of Ivy League theater grads rebelling against the trend of increasingly elaborate, extravagant and expensive productions. Far more than money can get lost in such high-cost, high-tech escapist exercises in excess, something Fiasco set out to prove with a less-is-more, back-to-basics, actor-driven style.

The cast sets the scene even before the show begins, walking the aisles to interact with audience members as they take their seats. And then the show simply starts as the house lights dim and the ensemble moves to the stage. No dramatic buildup, no grand entrance, no pretense that this is anything but a storytelling troupe with a job to do. Who needs a Narrator in such a situation? The actors simply take turns stepping out of character to provide the necessary context. 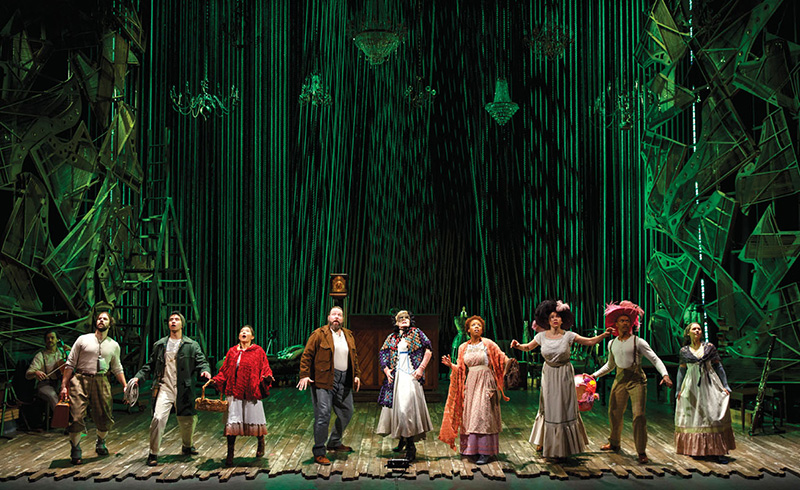 Into the Woods — Photo: Joan Marcus

The ensemble is enthusiastic and dedicated, and ideally poised to lead the audience on an enlightening and revealing journey, one in which the lyrics are as front and center as they’ve ever been. Washington native Eleasha Gamble has been a star of many local productions over the years, and she’s as commanding here in the heartbreaking role of the Baker’s Wife. Assured yet vulnerable and earnest in the most likable, least dogmatic way possible, Gamble is the understated belle of these woods. Even with minimal costuming, Vanessa Reseland is almost unrecognizable in her presentation of the two sides of the Witch: the wicked, hideous, elderly hunchback who seems almost as frightened by her appearance and demeanor as anyone else, and the ravishing pre-curse beauty whose supreme self-confidence is almost unbecoming.

Fiasco’s take illuminates minor details and nuances, not to mention helping appreciate minor characters you likely had barely even thought of before. Darick Pead takes on three, wholly divergent ones, for instance, including a charmingly agonized Rapunzel’s Prince and Florinda, one of Cinderella’s step-drag queens. Yet he also adds a touching and hilarious new dimension to another traditional stock character, the cow Milky White, usually only portrayed as a prop. It’s the same approach Fiasco used for the dog in Two Gentlemen of Verona, but it works to far greater effect here chiefly because Pead portrays Milky White as a sensitive, sentient being, exhibiting as much feeling as a cow can express.

Even if you’ve seen Into the Woods in one of its Broadway incarnations, or at Signature, or in its screen incarnation, Fiasco’s production is a journey well-worth taking again.

Into The Woods at Kennedy Center

Doug Rule covers the arts, theater, music, food, nightlife and culture as contributing editor for Metro Weekly.
← Previous Story “Moby Dick” at Arena Stage (review): Catch a ride on this bewitching Pequod
Next Story → Craig Wallace on “A Christmas Carol” and being Scrooge in a time of Trump