There’s little reason for Star Wars: Rogue One to exist other than to make Disney money. That said, it’s not terrible.

By Randy Shulman on December 14, 2016 @RandyShulman

At some point, a funny thing happened to Star Wars. It became an industry, one with its own particular set of commodities and brands. What had essentially started life as joyful, fun homage to serialized shorts of the ’30s and ’40s, rapidly fell prey to its own sense of myth and self-importance. It would have been more than fine for creator George Lucas to conclude the run after three movies — Chapters 4, 5 and 6 — but as with any industry, a fan base had to be fed, money had to be made, stockholders had to be appeased. And while Star Wars is one of the few movie franchises that maintains a high code of integrity to its cause, notably in the form of quality control, it is not immune from lining its pockets with the gold of the galaxy — now more than ever under the ownership of Disney.

Chapters 1, 2 and 3 were a misstep, in part because they were little more than an ego-trip for Lucas, who is not — and never has been — a competent director. Being a visionary is one thing, but that doesn’t translate to actual filmmaking. They were pointless films because they didn’t add anything to the narrative. Rather than advance it, they simply spun it in place and only in Chapter 3: Revenge of the Sith did the series start to show a sign of life as Darth Vader was (finally) born.

Personally, I loved The Force Awakens. It was a stunning return to form for the series, brisk and spirited, with just the right touch of mystery and gravity. The movie came perilously close to dethroning Empire Strikes Back, considered by many (including myself) to be the best of Star Wars films. I’d have been happy to wait a few years for Episode 8, but Disney has solemnly sworn to release a Star Wars film every year from now to eternity. And how do you achieve that? By finding side-stories and filling in missing pieces that really don’t require filling in. By force-feeding us origin stories of characters whose beginnings should be left to our imaginations. (Do we really need a Hans Solo origin story? Why not an Ewok movie? Oh. Wait. Never mind.) Basically, by creating nothing of real import and hoping no one notices. Regardless, spun sugar is still sugar — and the first of these cinematic confections, Rogue One: A Star Wars Story, has its sweet moments. If nothing else, it’s intensely competent. No one is going to screw up this franchise.

It’s good but it’s not great. In fact, it’s nowhere near great. Apart from a magnificently orchestrated 30 minute climactic battle that pulls out all the stops, it’s nowhere near as fun or engaging as The Force Awakens. And that, of course, is by design. You can’t have the side stories eclipse the main story. That would never do.

It’s no spoiler to reveal that Rogue One (

) bridges the gap between Episode 3: Revenge of the Sith and Episode 4: A New Hope, by detailing for us how precisely the Rebels stole the Death Star plans from the Empire and got them into the hands of a certain, cinnamon-bun haired princess who then… well, you know the rest.

On its own merits, Rogue One is a solid enough film, with a story that, while needlessly complicated in the first hour, settles into a nice blasters-a-blazing espionage film. Narratively, it fills a few gaps that never really needed filling, and fully and finally explains one key plot point from A New Hope that has plagued super-fans for decades. No need to speculate any longer. We now know why, how and who. If only we cared. 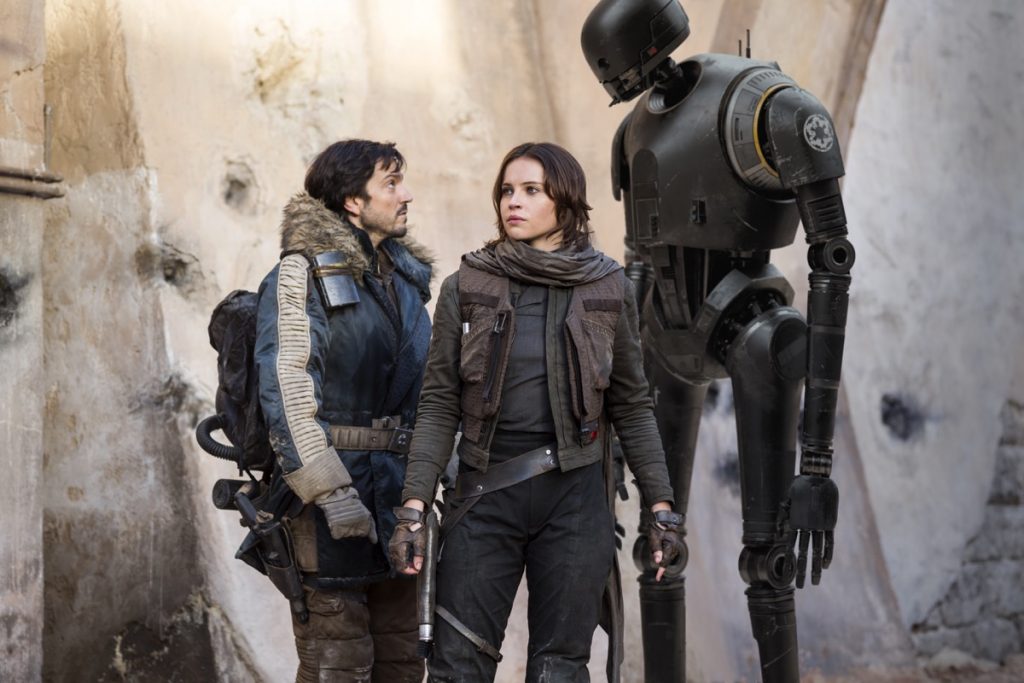 Since you already know how Rogue One ends going in, there’s a strange lack of suspense, despite director Garth Edwards’s best attempts to generate edge-of-your seat moments. Will our tough but cookie-cutter heroine Jyn Ersa (Felicity Jones) learn where the Death Star plans are? Yes. Will they seem virtually impossible to get, with obstacles galore (including what is almost certainly a nod to the magnificent sci-fi parody Galaxy Quest)? Yup. And will she actually obtain them and get them to her fellow rebels, evading a very angry, lightsaber-wielding Darth Vader? Um. Duh. Otherwise there’d be no new hope. Or any hope. Because that Death Star? It blows things up good. Real good.

Rogue One relies on the action relating to how these events transpire, but Edwards tries to generate suspense by using well-worn movie cliches that display a lack of imagination and point to the flaws of telling this tale in the first place.

If the story is negligible, at least the characters are fantastic, and it’s here where writers Chris Weitz (About a Boy) and Tony Gilroy (the Bourne films) and Edwards truly dazzle. Rogue One has some of the best characters to grace a Star Wars film in ages. Better yet, they’re portrayed by a diverse, international cast that speaks to how far we’ve come since Empire Strikes Back and its solitary black smuggler, Lando Calrissian.

Sadly, as good as this renegade band of miscreants is, they are, for all intent and purposes, wholly expendable. They’re martyrs for the cause and have been written in a way that we don’t get too invested in them. That way, when they are killed off, one by one, each in a showstopping way, we feel a tiny prick of sadness,  but nothing along the order of devastation when, say, someone like Hans Solo is offed. In fact, the amount of death in Rogue One is almost alarming. It’s not a matter of who will die, it’s a matter of when in the two hour and fifteen minute running time they’ll kick the bucket.

It’s all a pity, really, because there are some fantastic new characters on display, ready to be minted into figurines, including Donnie Yen’s blind monk Chirrut Îmwe — whose mantra concerning The Force will undoubtedly wind up on T-shirts for sale at your nearest Target — and Wen Jiang’s Baze Malbus, a massive hunk of warrior with a puppy dog’s heart. Riz Ahmed gives a rich, magnetic performance as Bodhi Rook, a pilot who defects to the rebel cause and becomes a key ally.

On the other hand, Ben Mendelsohn plays the movie’s bland villain, Orson Krennic, with a fixed sneer, as though in desperate need of Kaopectate. Krennic pales compared to Vader, who emerges for about five minutes and makes you wish the writers could have worked to incorporate him into the story more fully. Vader’s presence — and that deep, redolent voice, still belonging to James Earl Jones — invigorates Rogue One in an emotionally gratifying way. It’s like seeing an old friend. A very evil old friend.

But it’s a reprogrammed Imperial droid named K-2SO, spectacularly voiced by Alan Tudyk, that is perhaps the best reason to see Rogue One. He’s the antithesis to C-3PO, brightly sarcastic, independently minded and implausibly courageous, with a bitchy streak that (thankfully) never quits.

There is an element in Rogue One that will no doubt become its controversial talking point, once the secret is fully out. I’m not going to spoil it here, other than to say it left me profoundly unsettled, queasy even. In years to come, it could be viewed as one of those turning points for cinema, though I sincerely hope not, because the tactic deployed evokes a moral quandary that should be abandoned immediately by Hollywood. One could argue it’s a gimmick, but it’s a gimmick that goes way too far. One shouldn’t merely do things just because one can (are you listening Donald Trump?). Yet maybe some people — fans, mainly — will relish it and embrace it. But I think it shows a lack of respect to actors everywhere and, for a few moments, it turns Rogue One from basic popcorn fare into something unspeakably, unnervingly creepy.

Randy Shulman is Metro Weekly's Publisher and Editor-in-Chief. He can be reached at rshulman@metroweekly.com.
← Previous Story “Moonlight” scores 6 Golden Globe nominations
Next Story → Blood On The Mountain opens this Friday