Aisha Moodie-Mills: LGBT community must fight harder than ever after “disastrous election”

At last weekend’s Victory Institute conference, the talk was all about how to prevent LGBT rights from backsliding in a potentially hostile Trump administration

By John Riley on December 15, 2016 @JohnAndresRiley 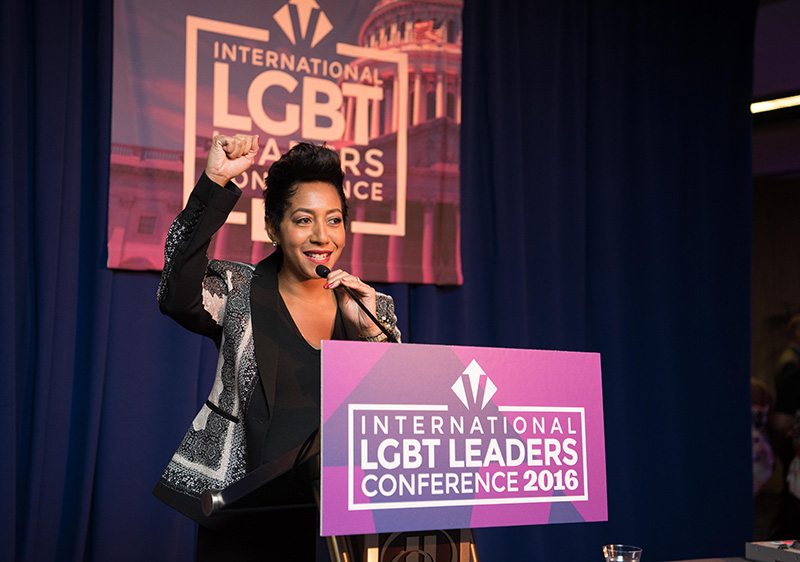 Prior to this year’s election, the Victory Institute CEO Aisha Moodie-Mills had been expecting to spend time at the organization’s LGBT Leaders Conference talking about presidential appointments and the possibility of confirming the first openly LGBT cabinet member in the Hillary Clinton Administration.

November 8 changed all that.

“It’s been about four weeks now since the disastrous election,” says Moodie-Mills. “What just happened is a dramatic shift in the country towards nasty, vile, anti-LGBT views. The president-elect has doubled down on the nasty rhetoric of this campaign, and is promoting people into his administration who would not only do our community harm, but would roll back the hands of time on progress a decade.”

Given the president-elect’s open courting of anti-LGBT social conservatives during the campaign, and a list of cabinet nominees that reads like a “Who’s Who” of people with anti-LGBT views, the conference, held last weekend in Washington, took on a much more urgent tone by focusing on ways to safeguard against any backsliding on LGBT rights.

The conference also served as a way to identify a young, diverse bench of LGBT people who may be interested in running for political office in the future. Trump’s victory, coupled with Republican control over both houses of Congress and, concerningly, a majority of legislatures throughout the country, has highlighted the importance of building a bench of progressive allies at all levels of government.

“The bench building is everything,” Moodie-Mills says. “And what we’re seeing in the wake of this election is that people are fired up, and they’re really excited and inspired to figure out what can they do, and how to be the change they want to see.”

It cannot be understated how “on the ropes” the LGBT movement finds itself in some areas of this country. Despite enjoying eight years of victories, from open military service to marriage equality, under the Obama administration, the community still finds itself fighting an uphill battle at the state and local level. In large swaths of the country, pro-LGBT legislators have effectively been shut out of government, relegated to the minority party. Even in states where governors of either party have refused to sign anti-LGBT legislation, bona fide allies in the legislature lack the numbers to sustain a gubernatorial veto. As an example, look no further than North Carolina, where, this past year, the legislature and Republican Gov. Pat McCrory passed a law that eliminated local nondiscrimination ordinances with LGBT protections and placed restrictions on transgender people’s ability to access public restrooms. Even with McCrory’s defeat, the controversial HB 2 law is likely to remain on the books due to the dominance of anti-LGBT Republicans in the legislature.

In that regard, the cultivating of potential future LGBT elected officials and progressive allies at the local level is crucial to avoid getting steamrolled by HB 2-style laws. But developing a bench of leaders ready to take on tough fights also provides a potential buffer against any rollback of hard-won LGBT protections that may occur on the federal level.

“It’s really critical that we are rallying our LGBT officials around this country to implement state and local solutions that can mitigate the fallout from the federal level,” says Moodie-Mills, “and do the best that they can to safeguard our community and to make sure they can stop and beat back anything that might do them harm.” 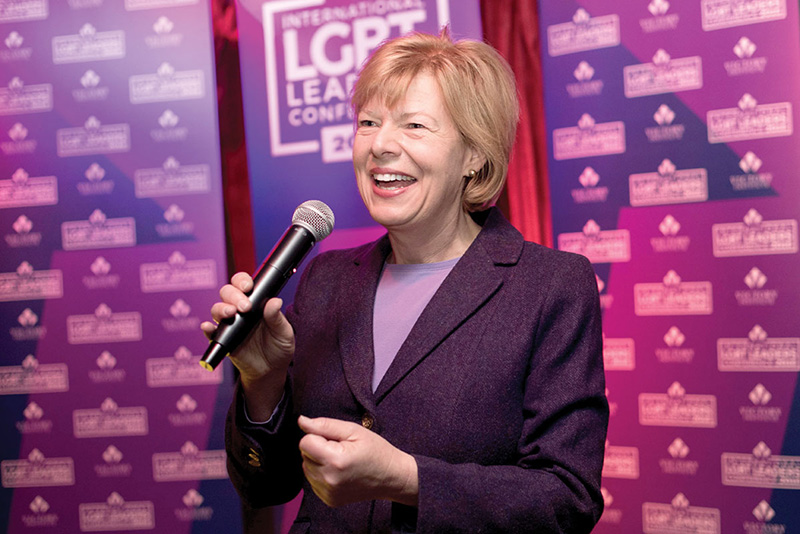 U.S. Sen. Tammy Baldwin (D-Wisc.), who spoke at the conference, is hopeful the Senate will perform due diligence as the body decides whether to confirm or reject potential cabinet members.

“I would hope that every member of the Senate, regardless of party, would care about people’s equal rights,” says Baldwin. “The nominees will come to the various committees. We will need to research them fully, and ask really tough questions. I know I’m hearing not only from people from my own state, but from around the country, with issues and concerns. … We have our work cut out for us.”

Liberal-leaning policy experts say the X factor in a Trump administration is how strongly he — or his cabinet picks — will pursue an anti-LGBT agenda.

“I’ve never experienced an incoming administration that was as unpredictable as this one,” says Paul Gordon, senior legislative counsel with People for the American Way. “Trump really courted the Religious Right to get their votes. How serious was he about it? Within days of getting elected, he was already backing down from previous positions. We just don’t know.”

Gordon suggests keeping an eye on the Justice Department, particularly if Sessions is confirmed at U.S. Attorney General.

“The Justice Department has a Civil Rights Division, which, under Obama, has been really terrific about protecting the rights of LGBT people in court, in terms of collecting statistics on hate crimes, working with local law enforcement. Under Sessions, I don’t think that’s going to be a priority. And if he gets confirmed, I think the community is really going to be pushing to say, ‘You’ve got to take these laws seriously.’”

Another concern about a Sessions-run Justice is likely to be the incoming administration’s stance on various discrimination lawsuits that are working their way through the courts, such as the case of Virginian Gavin Grimm, a transgender student suing the Gloucester County School Board for the right to use the boys’ restroom at school.

“Under President Obama, the Department of Justice is strongly supporting the transgender student in the Gloucester County case,” says Shannon Minter, legal director for the National Center for Lesbian Rights. “We don’t know what the DOJ under Trump will do, but there’s concern that they will withdraw support or switch sides. That’s something we need to be ready for.”

Beyond the Department of Justice, Minter is looking at other areas where a Trump administration’s change of policy might create problems for the community, such as undocumented LGBT people, including those fleeing persecution in their home countries. They’re not likely to find a sympathetic ear in the administration of a president who campaigned explicitly on deporting undocumented immigrants.

Another area of concern include Trump’s zeal for repealing the Affordable Care Act, which contains provisions that prohibit insurance companies from denying medically necessary care to transgender people. Moreover, LGBT people who are less financially stable and get their health insurance through the state or federal exchanges could see their health insurance taken away completely. HIV/AIDS funding under a Tom Price-run Department of Health and Human Services could be on the chopping block, which would be devastating not only for members of the LGBT community but other at-risk groups.

Another place where the LGBT community would be well-advised to remain vigilant is the passage of anti-LGBT federal legislation through Congress. As a candidate, Trump vowed to sign into law the First Amendment Defense Act, which would prevent the government from taking retaliatory action against individuals, businesses or corporations that seek to discriminate against LGBT people (and others) by claiming religious or moral objections to homosexuality, same-sex marriage, or extramarital sex. Already, Sens. Mike Lee (R-Utah) and Ted Cruz (R-Texas) are planning to introduce the bill next year in the hope that Trump will sign it into law.

But Sean Patrick Maloney isn’t worried. In fact, the gay New York congressman is embracing the potential of fighting against any anti-LGBT legislation. Earlier this year, Maloney, a Democrat, successfully swayed 43 Republicans to vote with his party to add an amendment to an appropriations bill that would reiterate workplace nondiscrimination protections for LGBT federal workers. He was also one of a bipartisan group of House members who fought against the addition of a separate amendment that would have undermined those same protections to a defense bill.

“If they want to have that fight again, let’s go. I’m good for round two,” says Maloney. “Because they got their butts kicked in round one. In other words, I don’t think their members want to be on record voting for anti-LGBT legislation.”

As for the possibility of a “religious freedom” bill such as the First Amendment Defense Act, Maloney believes the LGBT community and its congressional allies can emerge victorious.

“I don’t think there’s any reason to think we can’t win this fight going forward, even in a Trump administration,” he says. “When we put a spotlight on it last summer, we won. They cannot get away with this, unless they hide it from public view. That’s what we need to do: call it out.”

Meanwhile, several state legislatures are reportedly weighing ways to curtail LGBT freedoms and rights, including Texas, where the lieutenant governor, in his position as presiding officer of the state senate, has made passing an HB 2-style law one of his chief priorities for the upcoming session. Tennessee has introduced a bill to broaden the reach of an existing law allowing therapists or counselors to refuse to treat LGBT clients. “Religious freedom” bills are expected to be introduced in states like Alabama, West Virginia and Iowa.

But Nevada State Sen. Pat Spearman says the LGBT community and its allies don’t have to be relegated to playing defense. Rather, LGBT people can be proactive and push within their own state for greater legal protections. She feels LGBT people need to be willing to throw themselves into the fray and fight against any erosion of rights, using the power of their vote to send a message.

“I’m encouraging everyone, everywhere, to start where you are,” she said during a panel at the conference. “There’s a hell of a lot you can get done at the state level. We can build a firewall. Find out if you have in your state statutes laws that will protect people. If they don’t, find someone who will carry those bills. And if your legislature is not friendly to you, or not friendly to our community, then change it in 2018.”

John Riley is the local news reporter for Metro Weekly. He can be reached at jriley@metroweekly.com
← Previous Story Head of MPD LGBT Liaison Unit could face disciplinary action
Next Story → Khush DC at the DC Center, a group for queer South Asian people