Watch Dogs 2 is fun, vibrant and packed with interesting characters -- everything the original wasn't.

There’s something to be said for second chances. Two years ago, Ubisoft Montreal gave the world Watch Dogs, a much hyped, highly anticipated open world game that offered players extensive hacking capabilities and the promise that they could be used to manipulate the world around them. Reality, as it often is, was very different. Watch Dogs was by no means a bad game, but it was hampered by a number of issues, chief among them an utterly horrendous lead character mired in a bland, uninspired story.

It’s understandable, then, that some gamers might be wary of Watch Dogs 2. Fortunately, the new game dispels numerous concerns in its opening moments. While Watch Dogs started with a bang and then faded into a grey, miserable whimper, Watch Dogs 2 (

This time around, Watch Dogs‘ Aiden Pearce is nowhere to be found. A victim of “gruff-voiced, bland white guy” syndrome (one that afflicts far too many games), his backstory was convoluted, his quest for vengeance was never fully delivered by the story, and he was given some terrible dialogue to chew his way through as he navigated the streets of the seemingly always rainy Chicago. In his place we have Marcus Holloway, a young, African American millennial and gifted hacker, who is eager to join Dedsec — Watch Dogs’ version of Anonymous, but with higher production values. In Chicago’s place we have the sun-drenched streets of San Francisco and the surrounding Bay Area. From the outset, this is a wholly different experience.

Marcus isn’t given a laboriously tragic backstory. Instead, players are handed instant control and tasked with breaking into a Blume compound and removing all digital traces of Marcus from the organization’s servers. Blume operates ctOS, a surveillance program so extensive and pervasive that it must cause wet dreams among NSA hierarchy. Your task is simple: use Marcus’ hacking abilities to get inside, get past the guards, erase your history and then join Dedsec.

Initially, Watch Dogs 2 is a more complex, more confusing experience. Its contextual actions are more involved than the original, often requiring an additional button press — a simple fuse box, for instance, can be used as a distraction or as an improvised explosion, but you’ll have to remember which face button corresponds to which action after you’ve targeted said fusebox and pressed a different button. It allows for greater flexibility when navigating the game’s various environments and locales, but it can be a pretty steep initial learning curve.

That first mission also throws up a persistent problem with the series: the incredibly varied intelligence of the game’s AI. If anything, it’s more extreme than ever, with guards either possessing supernatural abilities in their detection of Marcus, or being utterly befuddled as to how or why one of their colleagues is lying in a crumpled heap next to a hacked laptop. “Must have been the wind, might as well carry on with my route,” said guard presumably thought.

Niggles aside, once you leave that opening mission, join Dedsec, and start the game proper, Watch Dogs 2 quickly showcases its strengths. It helps that the game is infinitely brighter than the first, in both its environment and its writing. San Francisco is vibrant, beautiful and wide open — crossing the Golden Gate bridge, driving through its leafy approximation of Oakland, cresting the city’s infamous hills, blasting through downtown, or hanging out on the countless piers that dot the coastline, it all makes for a more engaging, exciting experience than Chicago. Sure, the Loop was beautifully recreated, but everything else felt a little staid and uninviting. That’s not the case here.

However, what really elevates the sequel is the writing. Ubisoft hasn’t had the greatest track record in characterization and conversation — there was the highs of Assassin’s Creed 2, and the incredible lows of pretty much all of Watch Dogs — but for the most part, Marcus and his Dedsec cohorts are witty, engaging and brimming with cultural references. Marcus himself is intelligent, ruthlessly efficient at infiltration, and surprisingly moralistic for someone who steals money from others at the press of a button. Sitara is Dedsec’s leader and in charge of their promotion and design. Wrench, who wears an emoticon mask and spits out pop culture references like a confetti cannon, handles the group’s mechanical needs, creating weapons and infrastructure. Josh is high-functioning autistic and the group’s hacking brains, a veritable genius who also often lends some emotional warmth to proceedings. Together, they’re one of the most likable groups of protagonists in recent gaming history. Certainly, they’re a damn sight better than Aiden Pearce and his cohorts.

Dedsec’s main goal is to take down Blume, and to do so they must amass followers, who lend processing power on their smartphones to Dedsec’s computational efforts — essentially, building a networked grid that can take down ctOS. Marcus is sent out into San Francisco to hack as many influential people as possible: rogue corporations and amoral billionaires, for instance. Indeed, in the game’s opening couple of hours you’ll take down a Martin Shkreli-esque pharmaceutical billionaire, swindling millions from him and donating it to charitable means. Marcus gradually works his way through the city’s institutions and organizations, exposing the depth of the ctOS data collection, and amassing those much needed followers as Dedsec touts his exploits. Unlike the original game, the main story doesn’t feel like a tedious exercise. Watch Dogs 2‘s snappy writing and more open gameplay style keeps things fresh, even if there’s a lot of repetition in the actual mission structure (go here, hack this, steal that).

It helps that Marcus has two excellent new toys at his disposal. Aiden made do with just a smartphone and baton. Marcus has a laptop, a ball on a chain (surprisingly devastating), a taser, and new additions the RC Jumper and a drone. The Jumper is an RC car that can enter buildings, maneuver through vents, bounce over obstacles and hack into systems, letting Marcus stay safely out of sight as it zips around. The drone does exactly what you’d expect: give players an aerial view of a combat zone, letting them hack people, objects and manipulate the world — or, just follow random pedestrians as they go about their day (whatever takes your fancy, really). If you want to hover over some stop lights and cause car crashes all day long, Watch Dogs 2 is totally okay with that. More to the point, it endears such an irreverent sense of fun that you no longer feel guilty for doing that.

The original game was quick to remind you that a little girl died and you must absolutely get revenge right now, so stop messing around. Here, there’s no faux heartstrings being tugged. As such, the variety of side missions and distractions feel more naturally placed — and thus more inviting. You can go shopping, complete optional “operations,” take part in races, visit landmarks, become an Uber driver (known as Driver SF, a reference to another Ubisoft game), and a host of other things in San Francisco. What’s more, you can also drop into a friend’s game and do a series of co-op specific operations. Multiplayer online hacking also returns from the previous game (it was deactivated before launch, but is now live), and allows for the same tension-filled intrusions into another gamer’s digital world, in which you hunt someone down and kill them or hack them without being discovered.

Watch Dogs 2 isn’t perfect. Marcus’ morals are too grey on far too many occasions — he wants to rid the city of ctOS, but if players choose a violent style of play they will rack up quite the body count on their way. And the AI, particularly in earlier stages of the game, actively discourages against being stealthy unless you’re occasionally prepared to just sprint towards an exit and trigger a cutscene in order to advance without drawing a gun.

The AI needs a lot of work if Ubisoft decide on a third game. Not only are enemies far too extreme in their intelligence — either dumb as a rock or omniscient — but pedestrians are as well. Sometimes they won’t bat an eyelid as you steal a car, other times they’ll call seemingly the entire SFPD to chase you down. And while you’re trying to flee, you’ll be reminded that, while much improved, the game still struggles to make driving feel like something you want to do, rather than something you’re forced to engage with in order to get around. There are also performance issues — it wouldn’t be an Ubisoft open world game without them. The Xbox One gets arguably the worst port of the game, with 900p resolution and reduced filtering, but it still struggles to remain locked at 30fps in heavier moments of action or fast driving. The PS4 fares better and the PS4 Pro even more so (PC is king and it’s a much more stable port than the original), but while San Francisco is big and beautiful, it’s clear there’s still some optimizing to be done.

None of that detracts from what is ultimately one of this year’s biggest surprises. Watch Dogs 2 is finally something close to the game we all wanted it to be when the original was first teased back in 2013. No, you still don’t have god-like control over every aspect of the city with just a smartphone app, but Watch Dogs 2 is a much better game than its original iteration. It’s more fun, more enjoyable, easier to spend more time with. I finished the original’s story and then had a profound sense of “now what?” There was no reason to remain in Aiden Pearce’s dreary, miserable world, but there’s every reason to stay with Marcus and the gang.

Driving through San Francisco, chuckling at the various pop culture references and memes plastered on walls and sprayed in graffiti, listening to random NPC dialogue, hacking into cell phones and eavesdropping on conversations, rescuing people from random crimes, working through side missions and gathering collectibles is something you’ll want to keep doing — and few could say that of the original. As second chances go, Watch Dogs 2 is worth every penny.

Watch Dogs 2 is available now on PC, PS4 and Xbox One. 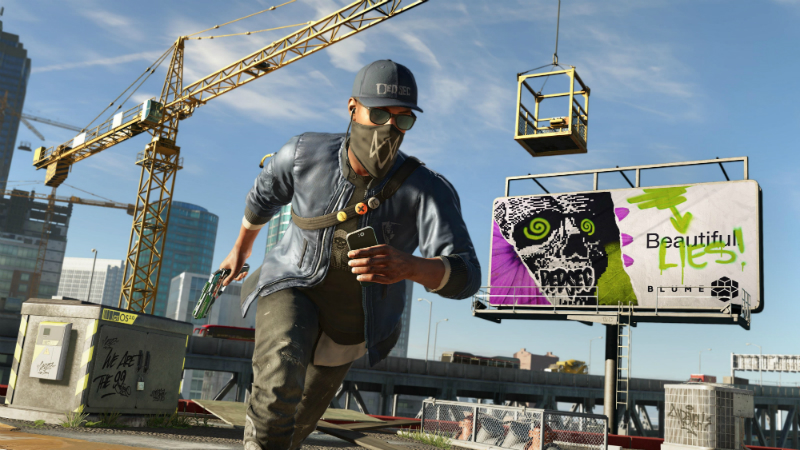