Scott Lively: Trump should pursue “separation of LGBT and state”

By John Riley on January 25, 2017 @JohnAndresRiley 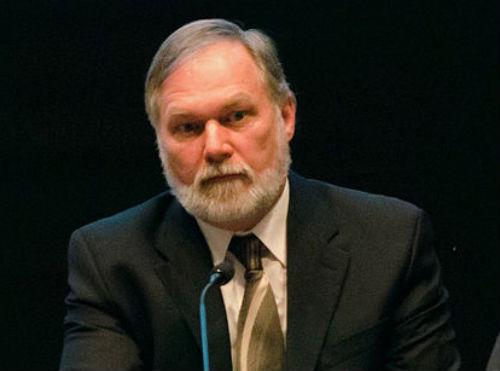 Scott Lively, the anti-LGBT pastor currently being sued in federal court for his involvement in promoting anti-LGBT laws in Uganda, including the country’s “Kill the Gays” bill, is praising the Trump administration and advising the president to completely eliminate any form of government support for LGBT rights.

In an column for the conservative website World Net Daily, Lively praises Donald Trump as “an American hero in the mold of President Ronald Reagan,” particularly with respect to his stance on LGBT rights.

“Like Mr. Trump, Ronald Reagan rightly had a high level of respect for homosexuals as persons, but as president, Reagan recognized his duty to protect society from the destructive ‘gay’ agenda, whose goal since the Stonewall Riots of 1969 is not tolerance but absolute cultural supremacy,” writes Lively.

Lively recommends that the new president name to the Supreme Court a nominee in the mold of deceased Justice Antonin Scalia, who wrote the majority opinion in Bowers v. Hardwick, the 1986 case finding that all 50 states had the authority to regulate “harmful sexual conduct,” including sodomy. (That decision was later reversed by the striking down of the sodomy laws in 2003’s Lawrence v. Texas.) Lively also praises the Trump administration for scrubbing the White House website of references to “the LGBT agenda, which had been Barack Obama’s top global priority.”

Lively, a former 2014 gubernatorial candidate in Massachusetts, is currently being sued in federal court by a Ugandan LGBT organization for aiding and abetting (as well as advocating for) anti-LGBT laws such as Uganda’s “kill the gays” bill, which originally called for the death penalty as punishment for homosexuality. But he bristles at being labeled anti-LGBT, insisting that “my true agenda has always been a matter of public record: a balance between the need of society to preserve the primacy of authentic marriage and the natural family as its norm, with the original demand of the LGBT coalition to enjoy a right to privacy behind closed doors.”

Lively quotes a white paper he issued during his campaign for governor that advocated for the “separation of LGBT and state” — meaning the government would be prohibited from endorsing or promoting LGBT causes or philosophy, just as it is prevented from endorsing specific religious beliefs.

As an example of what he proposed in Massachusetts in 2014, Lively says that schools would no longer be able to promote “homosexual, bisexual or transgender conduct” in schools, but LGBT students would still be able to form student clubs based on their personal choices. Under such policies, LGBT people could hold public parades, but government officials would be banned from participating in an official capacity. LGBT organizations could be formed, but would not be able to benefit from any taxpayer money.

Lively urges the president to throw his support behind principles similar to those in the First Amendment Defense Act, though he does not specifically mention that piece of legislation by name. In Lively’s world, individuals and religious organizations — defined broadly to include Christian bookstores, adoption agencies, hospitals , social groups and student clubs on college campuses — would be able to discriminate against or express opposition to LGBT rights without fear of government interference or penalty.

“Please ask President Trump to establish a ‘Separation of LGBT and State’ to take the government’s pro-‘gay’ thumb off the scale and give the American faith community a fighting chance to restore the natural family to its rightful place as the heart and foundation of our society,” he concludes.

John Riley is the local news reporter for Metro Weekly. He can be reached at jriley@metroweekly.com
← Previous Story N.C. senator wants to make it illegal to call former governor a “bigot”
Next Story → President Trump slams Chelsea Manning on Twitter for calling Obama’s leadership “weak”