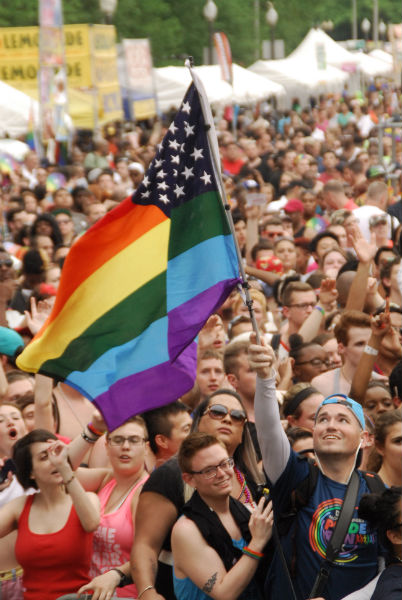 After the success of the Women’s March on Washington, a group of Brooklyn activists want an LGBT equivalent to show “solidarity through our Pride movement.”

Organizers say they are working with the Capital Pride Alliance to incorporate the march as part of the annual Pride celebrations.

“We urge all supporters, friends, and family to descend on D.C. for the Pride 2017 weekend (June 8-11th) to make sure our voices are heard,” they write on the event’s Facebook page. “If you cannot attend the March in Washington, D.C., we urge you to reach out to your local Pride organizations to assist in creating solidarity through your existing Pride events. Let’s make this truly a ‘National Pride March’ that spreads from coast to coast and shows solidarity through our Pride movement.”

According to Towleroad, David Bruinooge — who first thought up the event — said he specifically picked Pride weekend because of the mass of LGBT people who would already be congregating near the U.S. Capitol for Pride.

Adding marchers on top of the massive crowds of Pride-goers would only serve as a further symbol of the sheer number of LGBT people in America, Bruinooge hopes, and gain attention for the causes that the community cares about.

Ryan Bos, the executive director of the Capital Pride Alliance, says the organization is working with organizers to ensure it can fit into Pride weekend and ensure that a diverse cross-section of the LGBT community is represented at the march.

But another group of activists has created a Facebook event for that same day. The event, “Queer Resistance — Mass Demonstration in Washington,” says it’s intended to ensure that people of color, transgender individuals, and other marginalized groups within the LGBT community can hold leadership positions and are directly involved with the planning of the march.

“Consider this a placeholder for folks who are interested in a mass demonstration of queer resistance that refuses to be whitewashed or co-opted,” the organizers write on their Facebook page.

Women’s March on Washington: “Welcome to the revolution of love”

John Riley is the local news reporter for Metro Weekly. He can be reached at jriley@metroweekly.com
← Previous Story 5th Annual Capital Pride Reveal set for Thursday, Feb. 2
Next Story → Granted: BHT to present its annual grants on Saturday