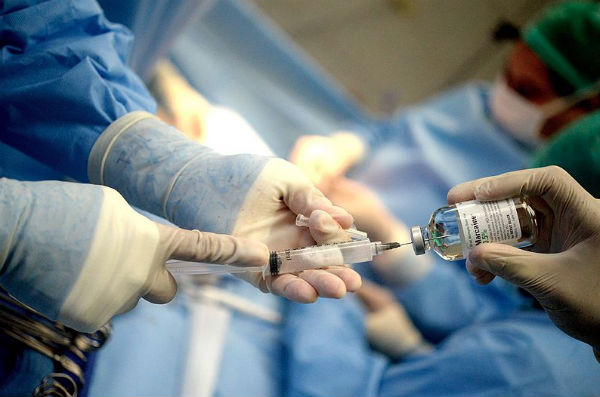 A New Jersey transgender man is suing a Catholic hospital after it refused to perform a medically necessary hysterectomy because of objections that he was having the surgery as part of his treatment for gender dysphoria.

Jionni Conforti, of Totowa, N.J., is suing St. Joseph’s Healthcare in Paterson, N.J., alleging that the hospital discriminated against him because of his gender identity, in violation of both New Jersey’s nondiscrimination law and a provision in the Affordable Care Act that prohibits discrimination on the basis of sex.

“No hospital should be allowed to decide who their patients are, particularly when they receive government funds,” said Omar Gonzalez-Pagan, staff attorney for Lambda Legal, which is representing Conforti. “Denying care to someone at their time of need because of their sex or gender identity is not only dangerous and humiliating, it’s against the law.

“In the United States, one in six hospital beds are in Catholic hospitals,” Gonzalez-Pagan continued. “These health care providers must comply with federal and state anti-discrimination laws so that the health of LGBT people who walk through their doors is not endangered.”

Conforti initially scheduled the surgery in 2015 on the advice of his doctor, who deemed the procedure medically necessary as treatment for his gender dysphoria and because of his increased risk of cancer. At first, St. Joseph’s agreed to perform the hysterectomy, but later dragged its feet in scheduling the procedure. On June 16, 2015, Father Martin D. Rooney sent Conforti an email saying that the hospital would not be able to allow his surgeon to schedule the surgery because St. Joseph’s is a Catholic hospital. Because Conforti’s surgeon only has surgical admitting privileges at St. Joseph’s, Conforti had to find a new surgeon and delay his surgery for an additional three months.

The Catholic Church currently opposes the notion that gender is alterable. Yet St. Joseph’s “patient bill of rights” explicitly guarantees medical services without discrimination based on gender identity or expression, The Associated Press reports.

A spokesman for the hospital told the AP that he hadn’t seen the lawsuit and wasn’t able to comment.

“This is my neighborhood hospital. My whole family has been treated here and this is the hospital where I would be taken by ambulance in an emergency and they discriminated against me,” Conforti said in a statement. “I am shocked and saddened by the treatment I received and I am afraid of how I would be treated if I need medical care again. St. Joseph’s Healthcare, who says it prides itself on a ‘patients first’ approach, completely disrespected who I am as a person, and that is not how a hospital should treat people.”

Conforti’s lawsuit against St. Joseph’s comes less than a week after a federal judge in Texas halted regulations by the Department of Health and Human Services that prohibit medical providers and insurers from discriminating against people based on their gender identity. A similar challenge has been filed in North Dakota by a group of Catholic businesses and organizations, including the diocese of Fargo. In both lawsuits, the plaintiffs claim that forcing them to perform even routine surgeries, like hysterectomies, for the purposes of treating a person’s gender dysphoria constitutes a violation of their religious beliefs.