By John Riley on January 19, 2017 @JohnAndresRiley 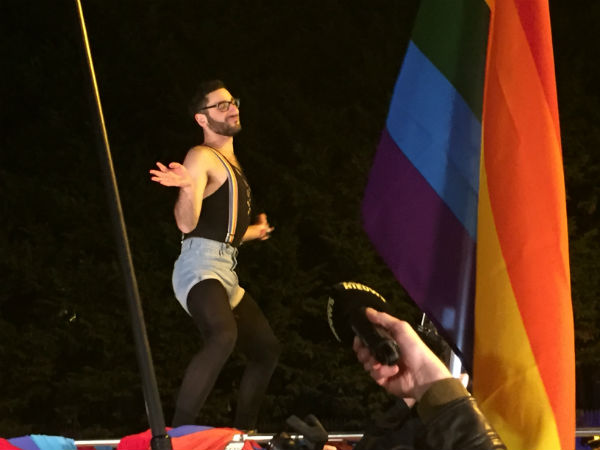 Firas Nasr, one of the organizers of the dance party protest, twerks on the hood of a car outside Vice President Mike Pence’s house – Photo: John Riley

They came, they saw, they danced — and made their presence known.

On Wednesday, Jan. 18, hundreds of LGBT people and allies descended upon the temporary Chevy Chase home of Vice President-elect Mike Pence to take part in a “Queer Dance Party.”

The party, imagined and carried out by social justice groups WERK for Peace and Disrupt J20, was thought up several months ago, as part of a kick-off of what will be a weekend of demonstrations protesting the Trump-Pence administration.

However, Wednesday’s event was specifically focused on Pence and his long history of anti-LGBT animus during his time in elective office, as both a congressman and as governor of Indiana.

“We are protesting Trump, we are protesting his agenda, but we are not ignoring Mike Pence,” says Lacy MacAuley, a 38-year-old Washingtonian who is one of the organizers affiliated with Disrupt J20. “Especially the LGBTQ community has a lot of reason to protest Mike Pence.”

The dancers met up at the Friendship Heights Metro Station before walking a mile-and-a-half down towards Pence’s street, trailing a car, outfitted with rainbow decorations and glitter, its speakers blaring music as people danced their way to and from the protest.

Outside of Pence’s house, the dancers would occasionally cut of the music and lead chants, including the favorite: “Daddy Pence, come dance!” 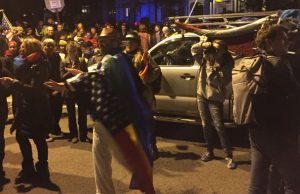 “To be honest, when I first saw the title of the event, I was like, ‘Hell, yeah!’ I thought it was the perfect statement, to be like, ‘F- you, we’re not going anywhere. We’re here, we’re queer, and we’re just going to be our normal selves,'” says Nia McKenzie, a 26-year-old lesbian from Alexandria, carrying a stack of glowsticks for the party.

“I think a lot of times when people think about all the Trump supporters who are coming in [for the inauguration], they think we’re just going to hide inside our little closets and houses and say, ‘I’ll wait until it’s over,'” says McKenzie. “But I think it’s important to show them the different types of queer people out here.”

Alejandro A., 29, from Arlington, says the dance party represents a coming together of the LGBT community ahead of what may be a difficult time in the years ahead.

“I think it’s really important for us to stand together. I think much of the LGBT community believes we have a threat right now, more imminent than before, especially with Mike Pence’s beliefs and his actions in Indiana, with regard to LGBT rights,” he says. “Trump, really, is not much better. In general, their ideals are bound with bigotry and close-mindedness.” 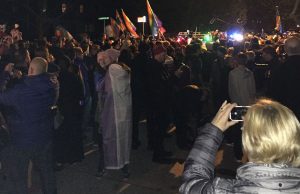 Will protesting actually accomplish anything though? Alejandro thinks so. “There’s different ways we can handle social and political issues,” he says. “We can be well-rounded, and talk to our representatives, and make our voices heard, and this is one of those ways. It fosters a sense of community that a lot of people need.”

MacAuley says the party is just one of many tangible signs of the resistance to Trump, but is enthusiastic about the numbers of first-time protesters who have gotten involved with groups like Disrupt J20 and WERK for Peace in the weeks since Trump’s victory.

“The main thing is the energy. Whatever you see in terms of numbers, it’s just the energy. Look at this enthusiasm!” she says. “The whole point is to set the tone of resistance for the coming years.

“Resistance feels like this. There’s a beautiful, growing movement, because of this sense of urgency. Whether you’re a woman, a person of color, an immigrant, a Muslim, someone in the LGBTQ community, or in the labor movement, or just poor and scared by Donald Trump and his divisive policies, whether you’re anti-war, whether you’re concerned about nuclear war — a very real threat under a Trump presidency — you’re part of an amazing movement,” says MacAuley. “You’re part of a movement that calls for love, that calls for celebration of differences, and celebration of diversity. That’s what people want right now. They want a little respect, a little bit of dignity.”

See some video clips of the dance party and march below:

John Riley is the local news reporter for Metro Weekly. He can be reached at jriley@metroweekly.com
← Previous Story BREAKING: Virginia anti-trans bathroom bill gets tabled on voice vote
Next Story → Photos: Scenes from the Inauguration Day Protest