By John Riley on January 18, 2017 @JohnAndresRiley 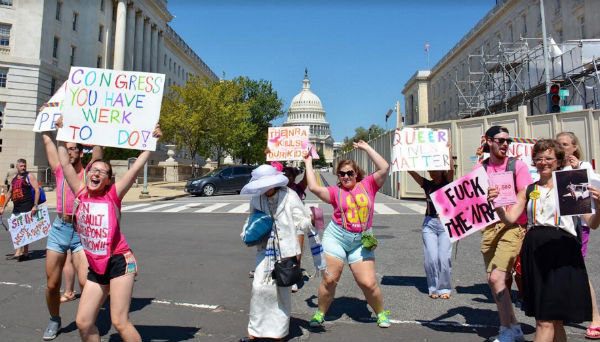 Guess who’s coming to dinner at Mike Pence’s house? Two groups of social justice activists, and 500 of their closest friends!

WERK for Peace and Disrupt J20 have organized a “queer dance party” outside the Vice President-elect’s temporary residence in D.C.’s Chevy Chase neighborhood.

So far, over 500 people have responded on Facebook that they will be attending the event, which will kick off at tonight, Jan. 18, at 6 p.m. at the Friendship Heights Metro Station. From there, the revelers will move onto Pence’s street for the main party.

“We are planning on taking it right to Mike Pence’s doorstep, to state that #WeAreHere and #WeWillDance,” says Firas Nasr, of WERK for Peace, one of the event’s organizers. “Mike Pence is known for his homophobic and transphobic policies and rhetoric, so we’re going to resist that by using love, connection, and celebration, and the diversity of our differences to send a message that hatred and bigotry will not be tolerated in our city or in our country.”

Organizers have reached out to Pence’s neighbors and others living in the area, and have, thus far, received positive responses.

It’s not surprising — after all, this is the same neighborhood where people began mounting rainbow flags on their houses after it was revealed Pence was moving in, before he shifts over to the Vice President’s official residence.

Nasr says organizers have looked into the legality of their actions, and determined they are not breaking any District laws by choosing to have this party. And it’s not an all-night affair: Revelers will eventually relocate to an after-party venue, which will be announced at the event.

But what should people expect if they decide to attend?

“You can definitely expect lots of glitter, lots of rainbow paraphernalia,” says Nasr. “We will be playing loud music, and everyone will be dancing. We will be celebrating out queerness, our trans-ness, in front of [Pence’s] house. We’re planning to dance for as long as we can.”

WERK for Peace and Disrupt J20’s “Queer Dance Party” is scheduled to run from 6 p.m. to 9 p.m. Revelers are asked to meet at the Friendship Heights Metro Station, located at 5337 Wisconsin Ave. NW, at 6 p.m. For more information, visit werkforpeace.org