Signature Theatre's retooled Titanic is at times overly busy, but it's also immersive and magnificently staged 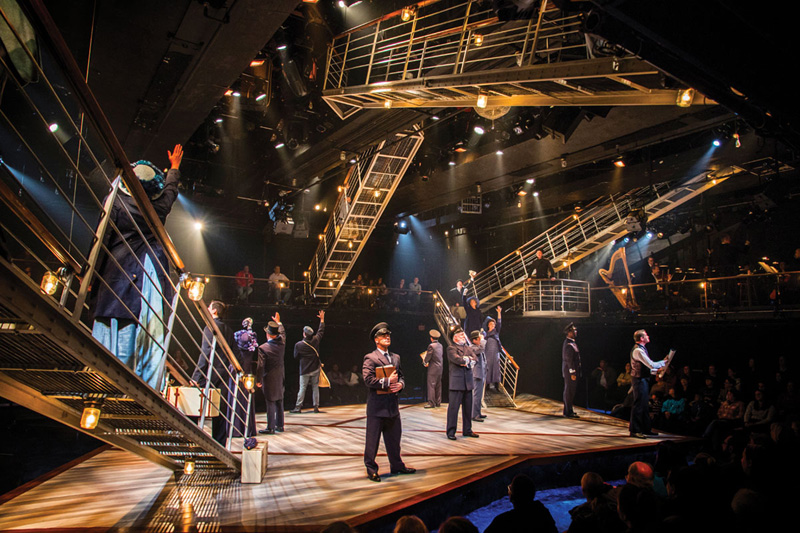 But Titanic? The show focuses on one of the biggest and most infamous failures in our modern era — a tragedy of epic proportions. Maybe we should move on to something more timely — and perhaps more uplifting.

But with Signature’s Titanic (

), it’s hard not to see the appeal. Artistic Director Eric Schaeffer has retooled the large-scale musical to make it more intimate, more immersive, improving our understanding and appreciation of its themes, proving there are both relevant and uplifting things to take away from it.

Schaeffer worked with Paul Tate dePoo III to create an in-the-round open stage. Rather than attempt to replicate the RMS Titanic on stage, Schaeffer and dePoo effectively conjure the ocean liner through the ingenious use of gangplanks and bridges, used by actors as the ship’s various decks.

The show is far from perfect — something evident pretty early on. There were more than 2,200 passengers aboard the fated ship. Stone and Yeston take the opposite approach of filmmaker James Cameron, who focused on a handful of characters and one love story. In the musical, we meet characters from all three passenger classes — 31 in total — as well as 16 officers and crew members. With a cast of 20, most actors do double, triple, even quadruple duty, juggling both major and minor roles. They come and go in quick succession, especially in the first half of Act One, when we meet too many couples and see and hear too little from most of them. It’s no help in remembering who’s who. As such, you might see less of or even miss some appearances by Signature regulars (Florence Lacey or Matt Conner), because, all told, there are only a few lead characters in Titanic.

Having so many actors in constant motion helps convey the feeling of being on a bustling ocean liner. The orchestra, led by James Moore, helps here. It registers a bit louder and more impassioned than usual — mostly by virtue of being pit-free and prominently perched on a second-floor balcony facing the crowd. (The orchestra even plays the crowd out at the end of the show, a subtle, thoughtful tribute to the eight musicians who, legend has it, went down with the Titanic.)

In addition to symphonic music that gently sways and splashes to emulate the high seas, Yeston incorporates choral and operatic flourishes into an already diverse score. One particularly inspired tune, “What a Remarkable Age This Is,” is a perfectly rendered Gilbert & Sullivan-styled comic opera satire in which the ship’s elites positively gush in harmonized unison about how great their lives are. It’s hilariously immodest, until you reconsider it, when it becomes wistfully sad.

Your emotions only get more conflicted as the ship races to the bottom of the ocean. Titanic ends with a reprise of the moving hymn “Godspeed Titanic,” sung in full throttle unison by the entire cast, positioned to fill the room. If such tragedy can produce an uplifting moment, this is most definitely it.