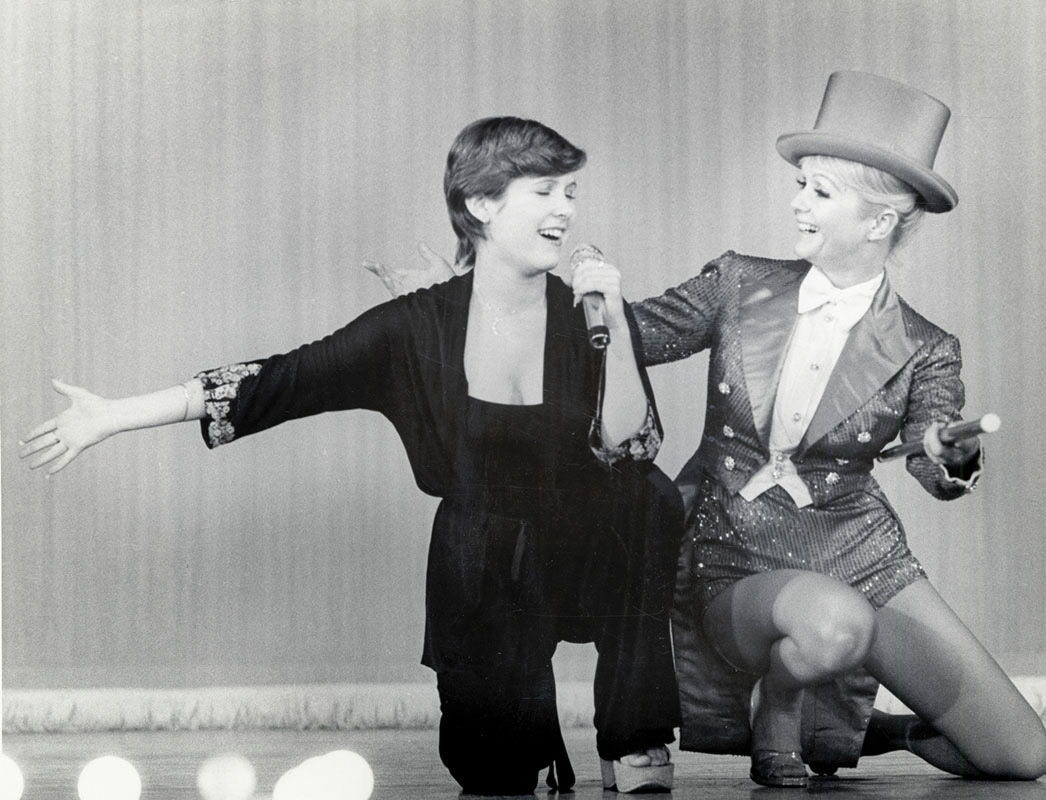 ) arrives with bittersweet timeliness, as family, friends and fans around the world still mourn the one-two punch of Fisher and Reynolds’ sudden deaths. The culmination of years of work by directors Alexis Bloom and Fisher Stevens, the film originally was set to air this spring on HBO, but the network justifiably (or opportunistically, as some might insist) moved it forward by several weeks.

Though now perhaps a sad memorial of one particularly complicated mother-daughter relationship, the film, as bright and compassionate as the women it covers, might yet prove to be uplifting entertainment for generations of fans whose lives have been touched by these two great stars.

That’s in no small part due to the duo’s crack comic timing. Fisher and Reynolds demonstrate early in Bright Lights they were a formidable pair, probably the only mother-daughter act on earth who could so winningly turn an impromptu recital of Irving Berlin’s “There’s No Business Like Show Business” into a performance of caustic, autobiographical, light-as-gossamer camp.

Thanks to HBO’s deep pockets there are dazzling clips aplenty, including Reynolds’ triumphant onscreen turns in Singin’ in the Rain, The Unsinkable Molly Brown, and Two Weeks with Love. At home, backstage, onstage at a casino lounge, we see the octogenarian trouper in and out of makeup and hair. The beaded gown she wears to belt out “Tammy” might weigh her down, but it’s not gonna stop her from putting on a damn fine show. During one quiet moment off-camera, Reynolds, her voice and bonhomie dampened by illness, tweaks the visitor at her sickbed by offering a hit of oxygen.

That visitor is Reynolds’s famous daughter, actress and writer Carrie Fisher. In the film, much is made (though not nearly enough) of the eclectic, even outlandish decor of Fisher’s house. It’s a stunning hodgepodge of art and tchotchkes, Hollywood souvenirs and silliness, where glitter is literally tossed around willy-nilly and even classic Coca-Cola signs come with a great story. Her father, Eddie Fisher, was once a well-paid cola pitchman, before an appetite for stronger substances left his career and finances in shambles. Unfortunately, Carrie Fisher inherited, or at least internalized, many of her father’s appetites. And like her mother, Fisher suffered publicly and bounced back seemingly a dozen times, a legend among legendary Hollywood daughters.

Carrie and Debbie — and Carrie’s brother, Todd Fisher, one of the film’s producers — elucidate the number of ways Eddie’s betrayal hit home, and Eddie himself makes a brief appearance, filmed before he died in 2010. A more brutally honest documentary might have found time to discuss Debbie and Carrie’s relationship to Eddie’s other showbiz family with Connie Stevens. Still, plenty is revealed, from home movies and hurt feelings to Liz Taylor’s old frocks and props, items prized among the warehouse full of Hollywood memorabilia shrewdly snapped up by Debbie in auctions over the years. We meet Todd’s wife, Catherine Hickland, an ’80s TV pinup and former Knight Rider star who drives around L.A. in her own replica of KITT, and Debbie’s mother (also now-deceased), who has nothing kind to say about show business. Completing the cast is Carrie’s daughter, Billie Lourd, already a buzzed-about actress whose superior deadpan is making her a TV star on FOX’s shaky Scream Queens.

The family line runs strong, yet Fisher, a lightning wit whose cleverness is indelible at its most cutting, is this movie’s true star. Among the storied sisterhood of Hollywood’s leading little ladies — Liza, Lorna, Christina, and more — Carrie Fisher occupied her own rarefied space as the raconteur survivor. A brilliant comic actress when given the chance (Hannah & Her Sisters, When Harry Met Sally), Fisher plays droll tour guide not just to her own turbulent life but to the perks and indignities of the celebrity lifestyle. Whereas Liza with a Z popped up in That’s Entertainment to trade sugarcoated MGM memories with Fred Astaire and Gene Kelly, Fisher reclines across her bed in a London apartment with childhood chum and fellow showbiz survivor Griffin Dunne to trade acerbic tales of daunting first times. Fisher’s well-spun yarn about accidentally catching a glimpse of her late stepfather, Debbie’s second husband, Harry Karl, in a sleepshirt but with no pants, approaches the dark, hilarious poetry of a Richard Pryor routine.

She wrings laughs out of her battle to lose weight for the production of The Force Awakens and with her commentary on Comic-Con, where fans wait for hours to weep at the hem of her garments. Somewhat surprisingly (for those who haven’t seen Postcards from the Edge, the Oscar-nominated movie adaptation of Fisher’s semi-autobiographical book), Fisher might also move a few viewers to tears singing her soulful rendition of “A Bridge Over Troubled Water.”

In a glowing live performance captured when she was just a shy, weed-smoking teen joining her mother onstage before an adoring crowd, Fisher busts out “that voice.” It’s a husky, expressive alto that brings her mother to tears with the thought of the power her daughter might have unleashed if only she’d opened her mouth to sing instead of zing. But zing is what Carrie Fisher did best.

André Hereford covers arts and entertainment for Metro Weekly. He can be reached at ahereford@metroweekly.com. Follow him on Twitter at @here4andre.
← Previous Story MSNBC cancels “Live with Thomas Roberts”
Next Story → Will & Grace is back! NBC confirms 10 episode season