By John Riley on February 20, 2017 @JohnAndresRiley 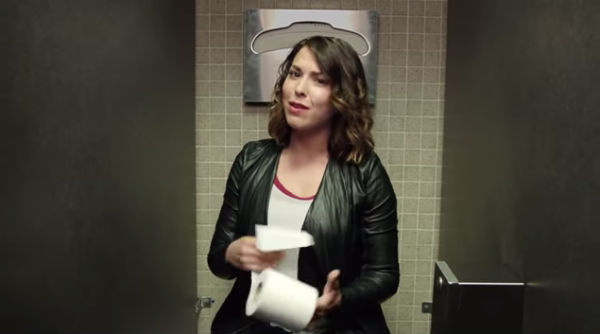 A clip from the “Taking a Seat, Making a Stand” ad. Photo: ACLU of Texas, via Youtube.

Opponents of a Texas bill that would force transgender people out of bathrooms that match their gender identity are fighting back by asking Texans to “pee with LGBT.”

In the ad, directed by Academy Award-winning director Richard Linklater —  a Houston native — viewers are urged to take action to stop the “bathroom bill,” also known as the Texas Privacy Act, or SB 6, which would impose North Carolina-style bathroom restrictions across the Lone Star State.

The ad is a project of the American Civil Liberties Union of Texas and the nonprofit Legacy Community Health, and attempts to use bathroom humor to rally support for their cause. As one man quips: “You’ve got to roll up your sleeves, pull down your pants, and pee with LGBT.”

The minute-long video shows various people in restroom stalls or at urinals as they address the camera.

“[T]his isn’t a privacy issue,” a middle-aged woman says as she tears a piece off a roll of toilet paper before passing it on to a young woman in the next stall, who says: “And we can take care of ourselves.”

One woman, playing a schoolteacher, adds: “Because money should be spent keeping kids in schools, not out of bathrooms,” before yelling comically at two students running down the hallway.

The ad, titled “Taking a Seat, Making a Stand,” also references the backlash that North Carolina received last year when Tar Heel State lawmakers passed HB 2, with a man in a cowboy hat saying: “We damn sure ain’t going to end up like North Carolina.”

HB 2 limited transgender people to using the bathroom of their biological sex unless they could provide documentation that matched their gender identity and also reflected that they’d had gender confirmation surgery.  As a result of the bill’s passage, several businesses scuttled expansions or moves to the state, out-of-town visitors cancelled conferences, and sports associations like the NBA, the NCAA, and the Atlantic Conference Championships relocated sporting events to other states that were deemed more LGBT-friendly.

SB 6, which is largely similar in scope to HB 2, is the pet project of Lt. Gov. Dan Patrick (R), who presides over the state Senate. Patrick, who reportedly has ambitions to one day run for higher office, has made the bathroom bill one of his top 10 priorities for this legislative session. Yet despite negative feedback from members of the business community in Texas and his office being beset by a deluge of calls, emails and other correspondence opposing the bill, Patrick has shown no signs of wavering in his support for the measure.

However, other Republicans, most notably, House Speaker Joe Straus, say they feel the state should be focused on more pressing matters.

To inform the public of, and rally support against, the bill, activists have begun using the hashtags #StopSB6 and #IpeewithLGBT on social media.

See the “Taking a Seat, Making a Stand” ad below:

John Riley is the local news reporter for Metro Weekly. He can be reached at jriley@metroweekly.com
← Previous Story Milo Yiannopoulos disinvited from CPAC over pedophilia comments
Next Story → NBA commissioner wants to bring back All-Star Game to Charlotte