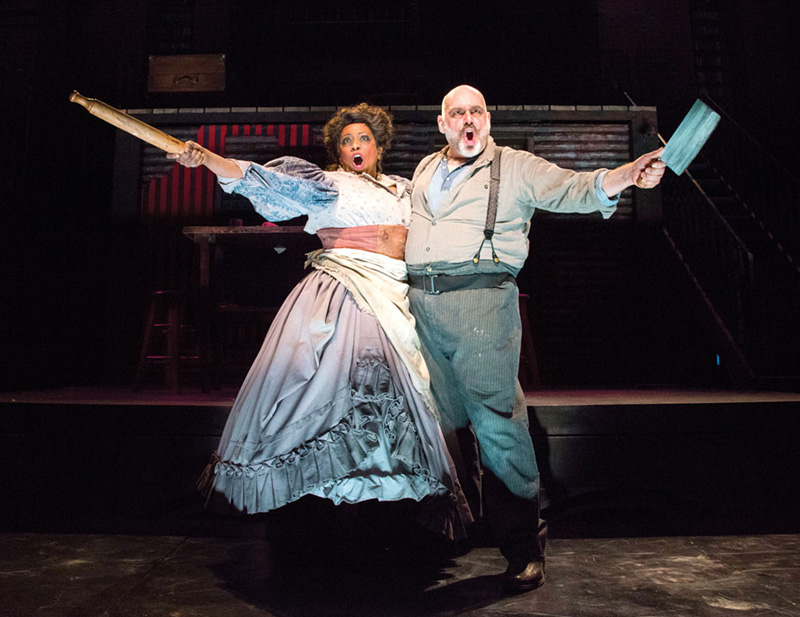 Faye Butler has never been the shy, retiring of actor to subsume herself in a role. And no one would ever want her to.

Butler is a force to be reckoned with on her own, possessing a demeanor that naturally compels our attention. She never fails to command the stage and steal most every scene she’s in, if not the whole show, even when in a minor role.

So when Olney Theatre announced Butler would take on the leading role of Mrs. Lovett in Sweeney Todd, it sent a jolt of excitement through many avid theatergoers. It was an inspired choice.

And it is. But before explaining why, I should note that Butler isn’t the only noteworthy development in Olney’s exceptional production, helmed by Jason Loewith. It’s quite likely you haven’t seen a more diverse Sweeney Todd (

), as the large 19-member cast is more than one-third minority — including six black actors — and features at least one more woman than usual. Beadle Bamford, the crooked Judge Turpin’s fawning yes-man assistant, is imaginatively played by Rachel Zampelli in drag. It’s an amusing alteration but little more than a cosmetic change: Beadle is still the dastardly accomplice offered a free shave by Sweeney — and he gets more than his whiskers cut.

Murder, mayhem and pies made of human flesh — there are few musicals as dark as the one that reigns as Stephen Sondheim’s most popular. A “dark operetta,” this tale of barber turned murderous after having been wronged by a crooked judge, also sounds different from most other musicals and is often performed in opera houses as well as theaters. 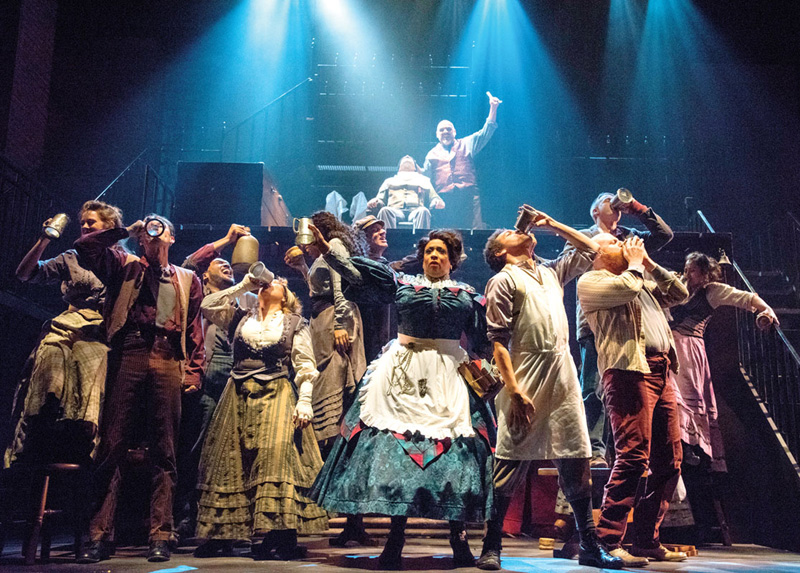 At Olney, everything starts off sounding as though you’re in church. Conductor Doug Lawler pounds out the opening notes on an amped keyboard that emulates an enveloping, echoing pipe organ. The effect is in service to “The Ballad of Sweeney Todd,” a foreboding opening number that samples the Funeral Mass. It’s a solemn affair that quickly becomes eerie, as lighting designer Colin K. Bills ramps up the strobes to give fleeting glimpses of a roving Greek chorus of actors warning of the melodrama to come.

Designer Milagros Ponce de Leon frames the action with a multi-story set of black metal staircases and walkways, evoking grimy, gloomy 19th Century London in the burgeoning days of the Industrial Revolution. The result is a kind of “twisted Victorian jungle gym” that is urban and dark.

Amid all the doom and gloom, there are some rays of light. Gracie Jones is ravishing as the fair-haired Johanna, ward of the creepy Judge Turpin (Thomas Adrian Simpson). Another highlight is Frank Viveros, a riot as the over-the-top flamboyant, faux-Italian charlatan Adolfo Pirelli. The evening’s breakout performance hails from Michael J. Mainwaring as Tobias, an overly excitable, guileless cheerleader for Pirelli. Mainwaring grows immensely by Act II, though, when he turns in an incredibly touching and tender take on the haunting, beautiful ballad, “Not While I’m Around.”

Daniel Benoit shines in the title role, making for a Sweeney Todd as unhappy, austere, dark and vengeful as any who have come before. Benoit’s Sweeney lays out his plan to cut and kill every last customer in his diva-esque showstopper “Epiphany,” and the thrill from his performance is palpable. It’s followed by one of the finest dark-comedy tunes in the canon, “A Little Priest,” a duet in which Mrs. Lovett proposes what Sweeney calls her “charming notion” to use the remains of his customers in baked goods.

Butler raises the roof, but the joy of watching her perform is in her wordless expressions and mannerisms — put to exceptional use here, helping brighten up the dour, forbidding mood of a show with unrelenting bloodlust and complicated musicality. It’s possible Butler won’t eclipse other greats you may have had the pleasure of seeing in the role — everyone from Angela Lansbury and Patti LuPone on Broadway, to Christine Baranski on tour at the Kennedy Center to Sherri L. Edelen a few years ago at Signature. But Butler — and Benoit — make Olney’s Sweeney Todd an unforgettable night, one that will stick with you long after it’s over.