Round House’s “Caroline, Or Change” (review): Caroline is brought vividly to life by Nova Y. Payton

Round House's bittersweet "Caroline, Or Change" is beautifully sung and acted 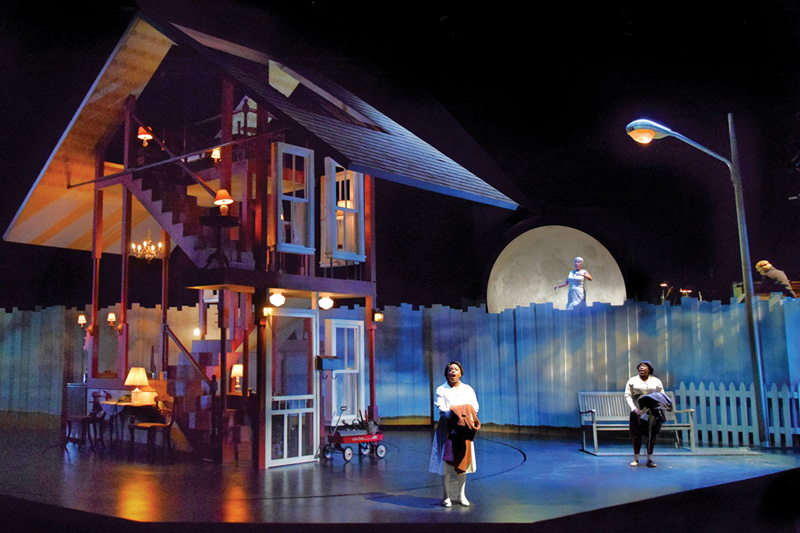 Of black Americans, Frederick Douglass once wrote, “[N]o people seem more imperfectly understood. Those who see us every day seem not to know us.” The frustration and melancholy expressed by Douglass are poignantly voiced in Caroline, Or Change (

), the brilliant operatic musical with book and lyrics by Tony Kushner (Angels in America), and music by Jeanine Tesori (Fun Home). Set in Louisiana in 1963, the story of a black maid who feels unseen — and unknown even to herself — is brought vividly to life in director Matthew Gardiner’s production at Round House Theatre.

Leading a terrific cast, the riveting Nova Y. Payton embodies stoic Caroline Thibodeaux, a divorced mother of four, whose oldest was just sent off to fight in Vietnam. Toiling daily in the home of a white Jewish family and tending with motherly concern for their 8-year old, Noah (Griffin McCahill), Caroline struggles to support her own kids on her $30-a-week salary. Nearing forty, she feels ever more burdened by her failures and only mildly comforted by her family and friends, especially realizing that her children are her life and her pride but not all her joy. Joy has gone missing, swallowed up by more pain than she can fathom during a time of war, oppression and protest.

That pain pours out in Tesori’s soaring theatrical score, tinged with gospel and ’60s soul, and through Caroline’s manner, an obstinate meanness that perplexes the lady of the house, Rose (Dorea Schmidt). Rose has her own problems trying to connect to her stepson Noah, whose mother died of cancer just months before his dad, Stuart (Will Gartshore), married New Yorker Rose and brought her to live in their voluminous old house. And what a house it is: set designer Jason Sherwood’s work dominates the stage. A marvelously large and somewhat unsightly contraption, the house, a busy array of floors and staircases, calls to mind M.C. Escher’s impossible stairs, emphasizing the characters’ struggle to find common ground or direction. Watching the set spin can distract from the emotional moment, but the huge structure serves a dramatic purpose, and what it lacks in eye appeal is more than compensated for by expressive lighting and costume design.

The beautiful singing, supported by a live nine-piece orchestra, lacks for nothing. From her powerful vocals down to her tightly constrained posture in her prim, white uniform, Payton owns Caroline, finding shades of warmth and humor within the woman’s shifts from surly to heartbroken. Schmidt is every bit her dramatic equal as Rose, sincere in her concern for Caroline but daunted by her maid’s chilly insistence on treating her as merely the new Mrs. Gellman. They forge a believably uneasy relationship that propels the drama forward as tensions mount. Also daunted trying to decipher Caroline’s foggy moods is her friend Dotty, played endearingly by Awa Sal Secka, who adds uplift to the show and is powerfully emotive in both song and silence. As Caroline’s willful daughter Emmie, Korinn Walfall doesn’t quite convey the precociousness or period Southern-ness that befits the character or her trajectory in the story, but she sings wonderfully.

Fin McCahill does a fantastic job as Noah, perhaps the most well-drawn character here, inspired by Kushner’s own experiences as a Jewish kid growing up with an African-American maid. The story works largely as Noah’s lesson in gaining empathy for those whose troubles are not his own, and this production persuasively reinforces the sentiment that every person, regardless of their status or station, deserves some degree of empathy from the world that surrounds them. For every Frederick Douglass, or J.F.K., or Oprah out there, surely a thousand Carolines scrub away at their wash basins, longing to be seen and heard. Caroline, Or Change artfully and earnestly calls on us to keep our eyes, ears and hearts open to anyone who might be struggling quietly for change.

Find discount tickets for Caroline, or Change at Round House Theatre

Caroline or Change at Round House Theatre

André Hereford covers arts and entertainment for Metro Weekly. He can be reached at ahereford@metroweekly.com. Follow him on Twitter at @here4andre.
← Previous Story “I Wanna Fucking Tear You Apart” at Studio Theatre (review): Accerbically funny and potent
Next Story → Folger Theatre’s “As You Like It”: A charmingly energetic soul-pleaser