The Keegan's world-premiere "Mack, Beth" struts and frets but misses the mark 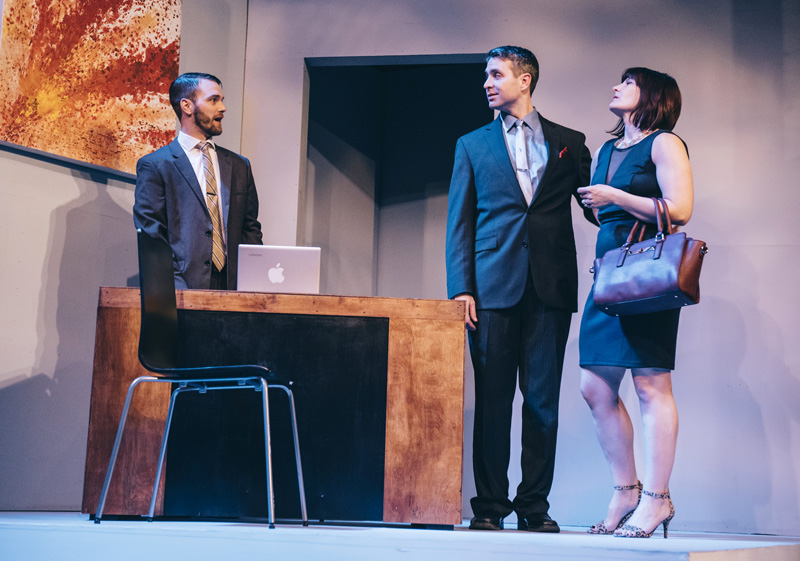 Set among samurai, Stalinists or within the lurid recesses of a lunatic’s mind, Shakespeare’s Macbeth bends readily to imaginative re-interpretation in version after version, on stage and screen. As long as there are ruling classes and striving masses, the timeless tale of an ambitious general and his cunning wife’s all-consuming thirst for power can be fruitfully molded to reflect the social and political climate.

Right now would seem to be an excellent time to explore the bloody, devastating consequences of madmen and women baldly seizing power. But Keegan Theatre’s production of D.C. playwright Chris Stezin’s Mack, Beth (

First, there’s a disconnect between plot and presentation. Stezin’s drama unfolds in a hip, contemporary world of software coding and tech revolutionaries, fertile terrain for Shakespearean betrayal. But it’s a milieu at odds with director Matt Ripa’s production, which reads less “I’m a Mac,” than Mack the Knife. Slick-haired men in dark, natty suits and a Lady in siren-red bask and strut around heavy wood desks, under enough ’80s day-glo lighting to give Patrick Nagel fits. For a story propelled by three computer geeks in an internet cafe, the sets and styling here — particularly Julie Cray-Leong’s costumes — appear firmly rooted in the mid-20th century.

The playwright cites Mad Men as inspiration for his William “Mack” MacIlraith (Andrew Keller), an exec at D-Tech, a former printing company owned by hard-drinking businessman Robert Duncan (William Aitken). Duncan and D-Tech, led by forward-thinking Mack, have spun a line of proprietary software into booming sales and skyrocketing stock prices. While Mack and his P.R. exec wife, Beth (Jennifer J. Hopkins), might envision their prospects rising along with the company’s, Duncan has just brought in James Shaw (Josh Sticklin), son of a loyal friend, to help take D-Tech even further. At his regular coffee spot, Mack encounters three soothsaying hackers (Emily Cerwonka, Izzy Smelkinson, and Tyasia Velines) who’ve spied enough market and company intel to inform him that he’ll soon be running D-Tech. Incensed that Duncan might be grooming Shaw to replace Mack, Beth sets in motion a devious plot to fulfill the geeks’ prophecy and install Mack in his rightful position at the head of the company.

As this is Shakespeare-adjacent, Beth’s plan calls for poison, but it also involves posting salacious and incriminating video on social media. Given recent leaks about a foreign government possibly using salacious video as leverage against our newly elected president, that aspect feels eerily prescient. Although, it might play more effectively had this production truly committed to its cyber-age setting. Stezin’s incisive reworking is undermined by the sense of watching something like The Social Network performed by the cast of Guys and Dolls. 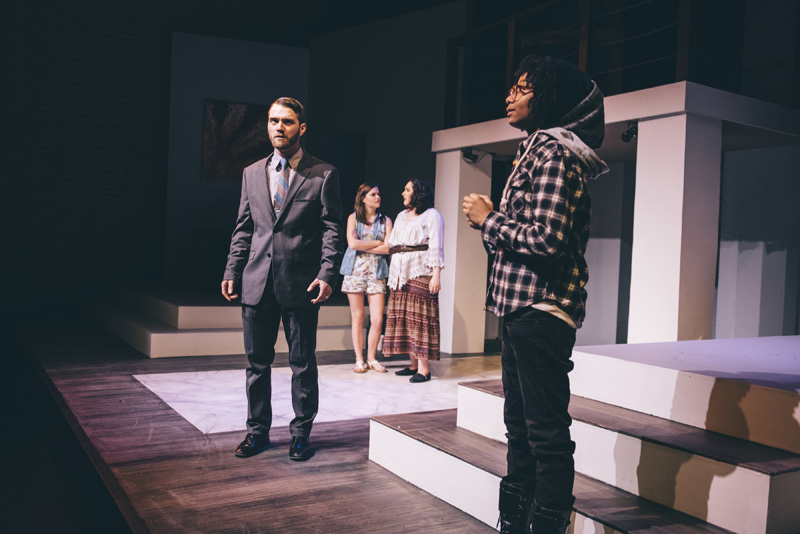 The cast is adept at this stylized presentation, and delivers a solid portrayal of the Scottish play’s familiar beats, but it feels short-changed by the lack of nuance in its Mack and Beth. She purports to use seduction as a tool for manipulating Shaw and Duncan, yet Hopkins’ performance sails past alluring, instead landing at brutally obvious. Come hither should come with a hint of reserve, but Beth lays all her cards on the table, all the time. She veils her machinations behind flirtatious banter and deception, but, for the most part, stalks with such blatant predatory intent that Duncan and Shaw seem fools for ever believing in her loyalty or friendship. And once the deed is done she wilts, seemingly to pressure, but perhaps too sharply and too quickly.

His hand forced to murder, Mack sparks to life, and Keller commands a greater physical presence when the staging calls for it, particularly in a scene late in the play opposite Karin Rosnizeck as Vida, the MacIlraith’s housekeeper whose daughter plays a key role in their scheme. The daughter character never appears in Mack, Beth but looms like a ghost from the more daring, thrilling drama that this could have been.

André Hereford covers arts and entertainment for Metro Weekly. He can be reached at ahereford@metroweekly.com. Follow him on Twitter at @here4andre.
← Previous Story Caroline, Or Change at Round House Theatre
Next Story → “I Wanna Fucking Tear You Apart” at Studio Theatre (review): Accerbically funny and potent