By John Riley on February 9, 2017 @JohnAndresRiley 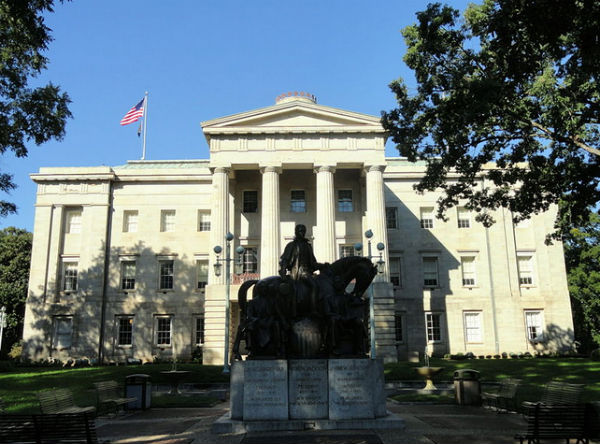 Democrats in North Carolina have introduced a pair of bills to repeal the state’s anti-LGBTQ HB 2 law and institute statewide nondiscrimination protections.

The latter bill would prohibit discrimination based on sexual orientation or gender identity in housing, employment, credit, insurance, education and public accommodations.

Those same protections were included in an ordinance approved by Charlotte City Council last year and, particularly the protections in public accommodations such as public restrooms, were the trigger for Republicans to pass HB 2.

HB 2 overturned such ordinances and limited transgender people to using restrooms that are designated for their sex as assigned at birth.

But it also sparked outrage among the LGBTQ community and its allies, including major businesses, corporations, and sports associations that came out in opposition to the law, scuttling expansion opportunities in the state and canceling conventions or sporting events that had been scheduled to be held in various cities throughout North Carolina.

“My hometown of Greensboro has suffered enormously from economic losses because of HB 2, and the potential economic harm from the NCAA pull-out for the next 6 years is even greater,” Rep. Pricey Harrison (D-Greensboro), one of the cosponsors of the House’s repeal-and-replace bill, said in a statement. “The bill introduced today is a clean repeal of HB 2 and provides enhanced statewide nondiscrimination protections. This bill reflects North Carolina values, unlike HB 2. It is long overdue and we will work our hardest to enact this legislation.”

“HB2 codifies the marginalization of people just because of who they are. That kind of discrimination is not only cruel, but it is bad for North Carolina and it is bad for business,”Sen. Terry Van Duyn (D-Asheville), one of the cosponsors of the Senate version, said in a statement. “It is time that we repeal HB2 and reaffirm that every citizen in North Carolina deserves the opportunity to pursue their dreams and to be treated with equal respect. Then we can say North Carolina is truly open for business.”

The bills to repeal and replace HB 2 come after the North Carolina Sports Association warned lawmakers that the window of opportunity to repeal the bill was closing fast. Soon, the NCAA will be deciding which cities get to host sports championships, and could choose to exclude North Carolina cities from hosting any championships through 2022 if the discriminatory law remains on the books.

Rep. Cecil Brockman (D-High Point) filed a separate bill to repeal and replace HB 2, but did so without working in coalition with other members, as Harrison did. However, according to the News & Record, Brockman’s bill increases minimum penalties for sex crimes committed in opposite-sex restrooms, locker rooms or other facilities by three to seven years. The bill also increases penalties for rape or indecent exposure to children in restroom settings, as an olive branch to Republicans who are worried that repealing HB 2 will lead to a spike in restroom-based assaults.

“It’s long past time for the General Assembly to repeal the hateful House Bill 2, which has brought so much harm to our state and its people, and to take much-needed steps toward protecting LGBT North Carolinians from discrimination based on their sexual orientation and gender identity in many areas of their lives,” Sarah Gillooly, policy director for the ACLU of North Carolina, said in a statement. “These new protections would bring us closer to guaranteeing that all North Carolinians are treated equally under the law.”

John Riley is the local news reporter for Metro Weekly. He can be reached at jriley@metroweekly.com
← Previous Story Are We Drama Queens?
Next Story → Texas health center settles lawsuit with fired HIV-positive employee