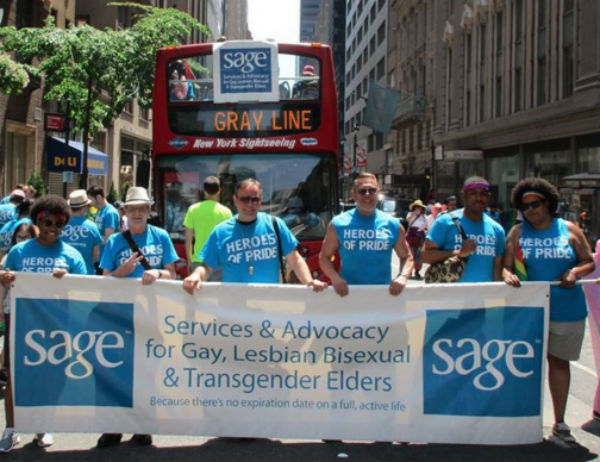 The Trump administration has proposed changes to an annual national survey of elderly people that would eliminate questions asking about respondents’ sexual orientation and gender identity. The proposed changes have prompted equality advocates to accuse the president of seeking to “erase” LGBTQ seniors from a survey used to determine what federally-funded services they might need.

As first reported by the Center for American Progress, the U.S. Department of Health and Human Services, has proposed a single change to the National Survey of Older Americans Act Participants, an annual survey of elderly people who receive federally-funded services under Title III of the Older Americans Act, such as home-delivered meals or health services. The Trump administration has also removed questions about LGBTQ identity from a revised version of the Annual Program Performance Report for Centers for Independent Living, which looks at services being received by people with disabilities.

With respect to the revised NSOAAP survey, four questions on elders’ sexual orientation and gender identity — which have been asked of respondents each year since 2014 — have since been removed in a draft version of survey put forth by the Trump administration. On March 13, the Trump administration published notice in the Federal Register that the NSOAAP survey would be open for public comment for 60 days, until May 12.

While the Trump administration initially insisted in the Federal Register that no changes had been proposed to the survey, that claim was later disproven by reporting from LGBT elder advocacy organization SAGE USA and the Center for American Progress showing that the sexual orientation and gender identity-related questions had been removed.

“Caring about our LGBT elders means making sure they have access to publicly-funded senior services, which can be literally life-saving,” Michael Adams, CEO of SAGE USA, said in a statement about the proposed change. “Now, it appears that the Trump Administration wants to make believe LGBT older people don’t exist, by erasing them from this critically important survey. We insist that this decision be reversed and that the federal government commit to serving all elders in need, including those who are LGBT.”

LGBTQ advocates fear that social conservatives, during the 60-day public comment period, could persuade the Trump White House to scuttle any attempt to count, and allocate resources based on the needs of, LGBTQ-identifying seniors. They point to statistics showing that LGBT elders are twice as likely to live alone or be single, and are three to four times less likely to have children to help take care of them during their latter years, as evidence of need that would be overlooked if LGBTQ seniors are not accurately counted in the NSOAAP survey.

In order to counteract that possibility, they have also urged LGBTQ people and allies to make their voices heard by submitting comments to the Department of Health and Human Services about the importance of keeping the LGBTQ-related survey questions intact.

“The Trump Administration is literally attempting to erase the LGBTQ community from the fabric of American history,” Sarah Kate Ellis, the president and CEO of GLAAD, said in a statement responding to the proposed survey revision. “Our LGBTQ seniors, many of whom survived the HIV and AIDS epidemic, do not deserve to have the government once again brush them off from obtaining transportation services, caregiver support, and even delivered meals that fit their needs. Access to these services is an American right, and this heartless move proves how anti-LGBTQ the Trump Administration has always been from Day One.”

“Apparently, President Trump doesn’t want the government to know, or want anyone else to know, basic information about the lives of LGBT older Americans, LGBT people with disabilities, or LGBT youth facing homelessness,” Mara Keisling, the executive director of the National Center for Transgender Equality, said in a statement.

Pointing to other recent actions by the Trump administration, including dropping a challenge to North Carolina’s HB 2 law, and the recent rescission of Obama-era guidance that had allowed transgender students to use facilities consistent with their gender identity, Keisling added: “This administration seems to be picking up speed in systematically attacking LGBT people, much as it is attacking other communities just because of who they are.”