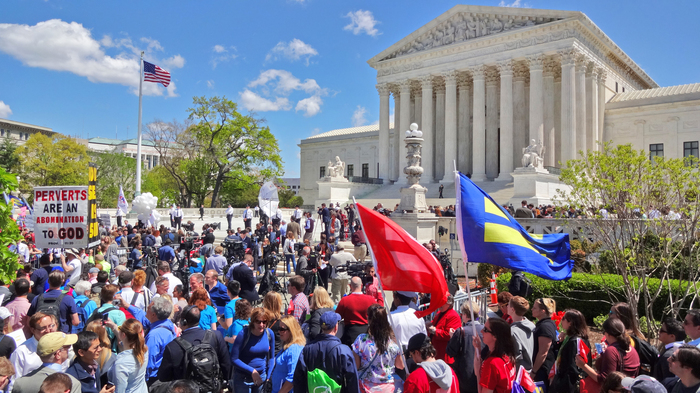 Virginia teenager Gavin Grimm is receiving an outpouring of support from politicians, faith leaders, educational organizations, and school administrators as he prepares for a part of his lawsuit against his local school board to be heard by the Supreme Court later this month.

Lawyers for Grimm, who sued his local school board over its policy barring him and other transgender students from using single-sex restrooms that match their gender identity, will argue on Mar. 28 that Gloucester County’s policy barring him from the boys’ restroom violates his rights under Title IX, a law that prohibits discrimination on the basis of sex.

As part of the process of preparing for oral arguments, groups with an interest in the court’s decision are asked to file amicus briefs with the Supreme Court outlining the legal reasons they feel the court should decide for or against Grimm. One of those briefs, filed Thursday afternoon, bears the names of 196 congressional lawmakers — 40 senators and 156 House members — who agree that Grimm and other transgender or gender non-conforming students have a right to a public education free from discrimination and harassment under Title IX.

Earlier in the day, more than 50 companies had signed on to another amicus brief submitted by the Human Rights Campaign in support of Grimm. Most of the signatories were tech companies, but all stressed that they value diversity among their employees, and are troubled by discriminatory laws prohibiting transgender people from being treated according to their gender identity.

“Gender identity discrimination is a form of sex discrimination,” the brief states. “The judiciary has historically played a critical role in ensuring equality across all lines, including those drawn according to race, gender, and sexual orientation. [We] believe that transgender individuals deserve the same treatment and protections as all other members of our society.”

Responding to the number of companies who signed onto the brief, HRC  President Chad Griffin released a statement praising their stance, saying: “Across the country, corporate leaders are speaking out because they know attacking transgender youth isn’t just shameful — it also puts the families of their employees and customers at risk. Transgender students like Gavin are entitled to the full protection of the law, and must be affirmed, respected and protected in the classroom and beyond.”

Members of the faith community have also gotten involved on Grimm’s behalf. In Virginia alone, 87 progressive faith leaders filed their own brief explaining why the nation’s highest court should rule in his favor.

“Signing on to the amicus brief in support of Gavin Grimm’s rights is a fulfillment of God’s vision that all of us are created ‘b’tzelem elohim — in the image of God,'” explained Rabbi Amy Schwartzman of Temple Rodef Shalom in Falls Church. “Every person, whether transgender, straight, lesbian, or gay, is a reflection of God and therefore to honor God we must honor every human being — affording each individual equal and respectful rights in all dimensions of their lives.”

“My wholehearted support for transgender equality is grounded in my conviction that each person is a beloved daughter or son of God,” added Rev. Dr. Steve Hyde, the pastor of Ravensworth Baptist Church in Annandale. “Transgender equality is not merely an issue. It is persons with faces and hearts, all of whom own the God-given birthright of equality and dignity.”

Several leading educational organizations, including GLSEN, National PTA, the American School Counselor Association, and the National Association of School Psychologists also signed onto a brief defending Grimm. Lambda Legal also submitted a brief on Grimm’s behalf that carries the signatures of superintendents, principals, and other school officials from 31 states and the District of Columbia. Those school administrators attest to their experience working in schools that already had transgender-inclusive policies in place long before Grimm filed his lawsuit. They hope to hold up their own experience as evidence that the hypothetical fears raised by the Gloucester County School Board have no basis in reality.

“The real world examples included in our brief demonstrate one simple truth: inclusive policies work. Schools that allow transgender students to use the restrooms and locker rooms that match their gender identity consistently report that all students — not just transgender students — benefit from policies that respect gender identity and encourage inclusivity,” Lambda Legal Counsel Tara Borelli said in a statement.

“Across the country, forward-thinking schools and school districts are proving the fear-mongers wrong. Their experiences show that respectful and inclusive policies create active and engaged student bodies.”

John Riley is the local news reporter for Metro Weekly. He can be reached at jriley@metroweekly.com
← Previous Story Amazon, Apple, Microsoft and 50 others support trans student Gavin Grimm
Next Story → Lawmakers urge Trump to reverse stance on trans student protections