Old As Time: Beauty and the Beast (Review)

It’s a safe bet any movie musical that opens with a rollicking new tune from composer Alan Menken and lyricist Tim Rice, sung by the peerless Audra McDonald, can’t go too far wrong. Although allowing McDonald more than a few snippets of melodious screen time apparently isn’t on the main menu, Disney still gets a lot right in this sumptuously produced live-action remake of the studio’s own 1991 animated classic, Beauty and the Beast (★★★ 1/2). Adapted by screenwriters Stephen Chbosky (The Perks of Being a Wallflower) and Evan Spiliotopoulos (The Huntsman: Winter’s War), and directed by Bill Condon (Dreamgirls), a man who knows his way around a lavish Hollywood musical, this Beast is darker in tone and brighter in wit, if not nearly as romantically transporting as the Oscar-winning original.

The filmmakers have chosen their Belle well, handing the role to Emma Watson, who’s no gifted singer, but embodies with ease the fair young Parisian transplanted to a “poor provincial town” with her tinkerer father, Maurice (Kevin Kline, also well-cast). A lover of reading and books, and a crafty inventor herself, Belle is more self-possessed than any other damsel in the village, and Watson makes her at once a tad superior and yet utterly likable, not unlike Hermione Granger. It makes sense that Belle draws the leering attention of the comically self-obsessed town hunk Gaston (Luke Evans), who, despite her firmly stated objections, intends to have her for his bride.

But before Gaston can ambush Belle with a wedding, she’s off to rescue her father. Lost in a wintry forest, Maurice only narrowly avoided being ripped to shreds by hungry CGI wolves (that growl a lot like lions), and subsequently was taken prisoner inside a gloomy, cavernous castle ruled by the monstrous and secretive Beast (Dan Stevens).

To suggest that making LeFou gay sullies the character or the film’s family friendliness, is to ignore one of this film’s primary messages: “Can anybody be happy if they’re not free?”

In a sequence of events that plays out rather perfunctorily — betraying the film’s impatience to dash through the familiar exposition and get to the dancing candlesticks — Belle arrives at Beast’s castle and offers her life for her father’s. Explicit in clarifying that Belle’s sacrifice is her choice to make, the movie then passes into that thorny patch in which the innocent heroine, now a prisoner, comes to love her captor. To the tune of Menken and Rice and late lyricist Howard Ashman’s memorable songs, Belle, treated like a guest who shouldn’t try leaving unannounced, gradually falls for the person beneath Beast’s frightening, brutish exterior.

Their unlikely romance blossoms under the watchful eyes of Beast’s servants in his enchanted castle: caring candelabra, Lumière (Ewan McGregor), his jumpy clock cohort, Cogsworth (Ian McKellan), and flighty feather-duster, Plumette (Gugu Mbatha Raw); wise teapot, Mrs. Potts (Emma Thompson), and her brave young teacup, Chip (Nathan Mack); vivacious wardrobe, Madame Garderobe (McDonald) and her dearest harpsichord, Maestro Cadenza (Stanley Tucci). This powerhouse ensemble, heard more than seen, helps massively to deliver the wonder of magic and fantasy evoked by the characters, as well as the pathos inherent in their unfortunate lot, cursed along with their master. If the magical household objects in the 1991 original seemed genially determined to help two lovebirds pitch woo, this time around, Lumière and company appear justifiably more invested in ending the curse and no longer living as teapots and coat-racks at the beck and call of a tyrant.

Beast does let his hair down, eventually. Oddly enough, for a story about finding true beauty within, once he’s out of his hunchback-of-the-tower rags, lying wounded in bed, this version (a combination of Stevens in a bodysuit and a CGI beastly mug) is just another handsome prince. Larger and hairier than the average Disney cartoon hero, he’s less savage beast than muscle bear, reasonable eye-candy competition for Evans, who cuts a devilishly dashing figure as Gaston.

Beast is no competition when it comes to owning the affections of Gaston’s catty, pining sidekick, LeFou (Josh Gad), the subject of vastly unwarranted gay-panic and controversy. The original animated LeFou, drawn as a buck-toothed buffoon, was by no means a sacred cow among Disney’s canon of evil sidekicks. To suggest that making him gay sullies the character, the studio or the film’s family friendliness, is to ignore one of this film’s primary messages: “Can anybody be happy if they’re not free?” Gad, perhaps more appealing as Frozen’s Olaf, succeeds by sheer commitment to the part.

LeFou joins Watson’s Belle as one of the remake’s improvements over the original. The inevitable instant that she and Stevens’ prince finally meet face-to-face, and Belle must see her love in an unfamiliar man’s eyes, Watson brings touching meaning to the tiny but crucial moment of truth. Stevens throughout supplies a vigorous vocal performance that unfortunately can’t compensate for the uncanny unrealness of his supposedly flesh-and-blood hero. And the songs, for the most part, sounded better orchestrated and more lively in the animated hit.

One of the most expensive musicals ever made, with a reported budget of $160-million, this Beauty does dazzle in the scale of its production design, in the lushness of the costumes and award-winning talent, but as the film itself instructs, don’t be deceived by appearances. Director Bill Condon, who earned an Academy Award for writing the devastating “beauty and the beast” drama Gods and Monsters, seems less interested in showcasing Disney-funded razzle-dazzle, and far more inspired by the story’s simple message of looking past a person’s packaging in order to appreciate their true character.

Beauty and the Beast 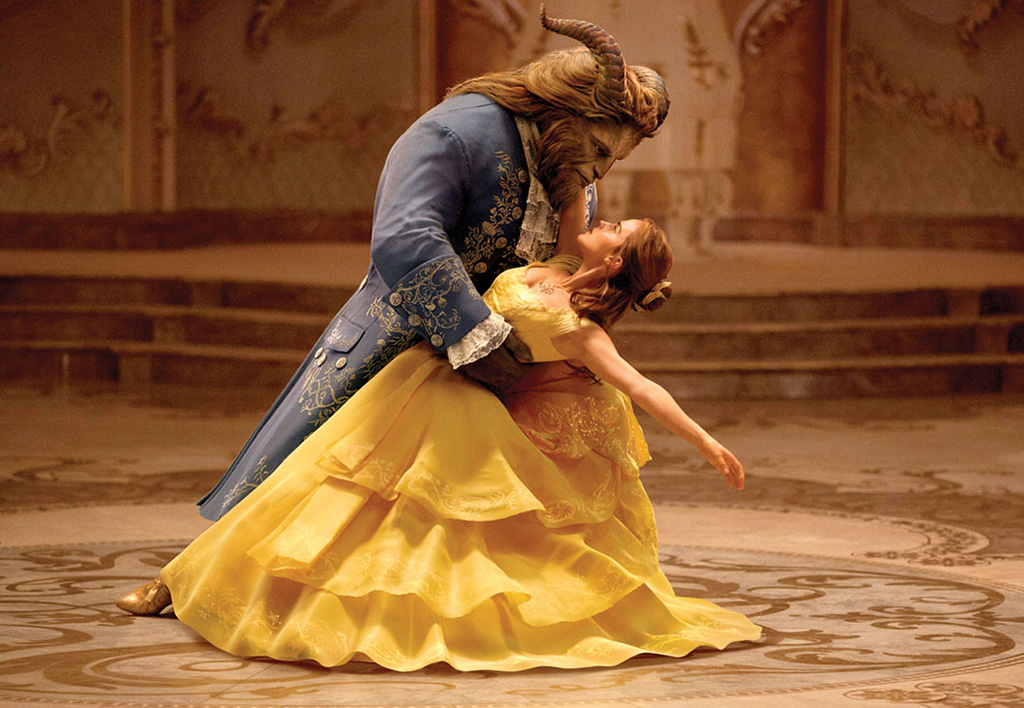