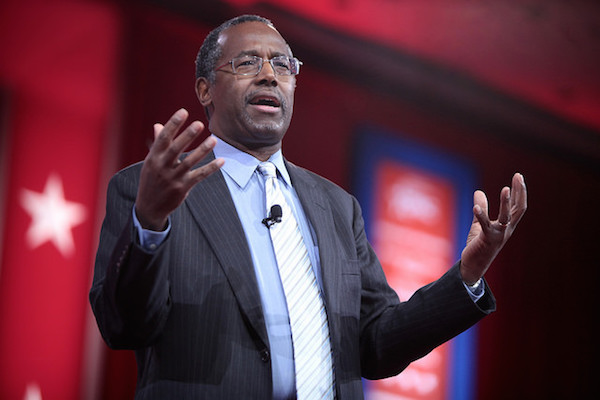 On Thursday, the U.S. Senate confirm renowned anti-LGBTQ neurosurgeon and former presidential candidate Ben Carson as the Secretary of Housing and Urban Development.

It was a largely party-line 58-41 vote, with seven Democrats voting to confirm him.

Carson’s nomination was delayed after receiving intense criticism from Democrats, who were skeptical of his lack of government experience, his seeming contempt for public assistance, and some past inflammatory statements he has made.

LGBTQ groups had expressed alarm at Carson’s nomination, worrying that he would attempt to reverse housing protections for the LGBTQ community, such as the Obama-era Equal Access Rule, which prohibits housing providers that receive federal funds from discriminating based on a person’s gender identity.

For example, a shelter receiving federal funds must house a transgender person based on their gender identity, not on their biological sex.

At his confirmation hearings, when Carson was asked if he would protect LGBTQ Americans from discrimination, he promised he “absolutely” would. But he then followed that by implying that LGBTQ people who were asking not to be discriminated against were somehow asking for “extra rights.”

During his presidential campaign, Carson became known for his derisive or inflammatory statements about LGBTQ people. He has previously blamed gay marriage for the fall of the Roman Empire, said that prisons prove homosexuality is a choice (something he later apologized for), and insisted that biological sex is immutable, calling the concept of being transgender “the height of absurdity.”

The National Center for Transgender Equality lamented Carson’s confirmation in a statement.

“The Senate has just voted to confirm a man who called over 1.4 million of his fellow Americans who are transgender ‘abnormal’ and referred to acknowledging their very existence as ‘silly,’ ‘beyond ridiculous,’ and ‘the height of absurdity.’ Even setting aside Dr. Carson’s self-professed inexperience, these mean-spirited statements alone should have been disqualifying. The Senate will now own those comments,” said Mara Keisling, the executive director of NCTE.

“The Trump administration has already shown it is comfortable attacking families and children, including transgender children and refugee children. Now it will have someone famous for spouting intolerance atop an agency charged with ensuring fair housing and helping Americans facing poverty and homelessness — including the 29 percent of transgender Americans living in poverty and the 23 percent who experienced housing discrimination in the last year,” Keisling added. “Despite today’s vote, we will continue to work together with all those who value dignity, fairness, and compassion to promote fair housing and resist any attempt to roll back civil rights or attack vulnerable communities.”