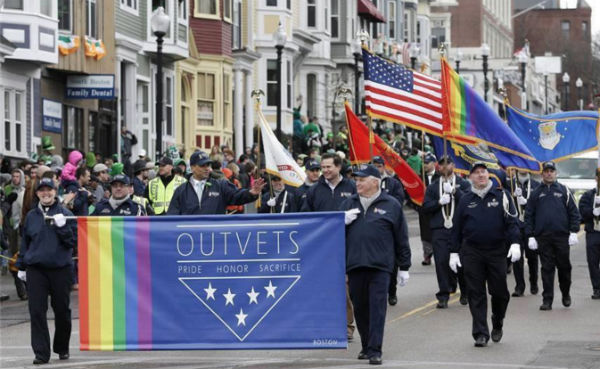 Amid a backlash from politicians and the public at what some felt was discrimination against the LGBTQ community, the South Boston Allied War Veterans Council has reversed course and extended an invitation to the LGBTQ veterans group OutVets to march in Boston’s annual St. Patrick’s Day Parade, which has been scheduled for Sunday, Mar. 19.

As of 5:30 p.m. on Friday, Mar. 10, OutVets confirmed it had received an invitation but had not yet responded to it.

Earlier in the week, the Council had voted 9-4 to reject OutVets’ request to march in the parade, despite the fact that the group had participated in the parade for the past two years, without incident.

Tim Duross, speaking on behalf of the War Veterans Council, previously told The Boston Herald that the objection to OutVets’ participation was not based on a desire to discriminate, but the belief that the organization had violated parade rules, which bar any “portrayal of sexuality.” Duross said members of the Council felt that the group’s rainbow logo – which the group marched under in past parades — was a sign of support for homosexuality.

But Bryan Bishop, the director of OutVets dismissed such arguments as ridiculous, telling The New York Times: “I told them if that’s the case, then every picture of a rainbow in the parade that leads to a pot of gold needs to be removed.”

After news of OutVets’ exclusion spread, Gov. Charlie Baker, Mayor Martin Walsh, and U.S. Sen. Ed Markey (D-Mass.) said they would skip the parade if OutVets was not permitted to march. U.S. Rep. Stephen Lynch (D-Mass.), who represents South Boston, indicated he would try to serve as a mediator between the two sides, but said he would also be forced to boycott if the veterans group continued to be barred from marching.

U.S. Rep. Seth Moulton (D-Mass.), a Marine veteran who served in Iraq, issued his own statement calling for a boycott if his fellow veterans continued to be discriminated against. Moulton had previously marched with OutVets in the parade in 2015.

“It is outrageous and disgraceful that a group by the name of Allied War Veterans would decide to ban OutVets from marching in this year’s St. Patrick’s Day Parade,” Moulton said in response to he Council’s decision. “Let’s just be clear: these are men and women who courageously put their lives on the line for our county. They deserve our respect just as much as anyone, and if this decision is not reversed immediately, I would encourage anybody who supports freedom, equality, and the service of our veterans, no matter who they are, to boycott this parade.”

Daniel Magoon, the executive director of Massachusetts Fallen Heroes, had been slated to serve as chief marshal of the parade, but announced he was stepping down after OutVets’ exclusion.

For years, the South Boston Allied War Veterans Council had maintained a ban on allowing openly LGBTQ groups to march, and even won a Supreme Court case in 1995 after that ban was challenged. The high court ruled in that case that, as a private organization, the Council had a right to exclude LGBTQ groups under the First Amendment. It was only in 2015, due to pressure, both internally and externally, that the Council relented and allowed OutVets to participate.

After it was barred from the Boston Parade, the group was invited to march in the Holyoke St. Patrick’s Day Parade. Michael Moriarty, the president of Holyoke’s parade committee, told WWLP that extending the invitation was just the right thing to do. If the group does not decide to march in Boston, it is not clear if they will accept invitations from other parades being held across Massachusetts on that day.

“We are a welcoming city, this is not new to us,” Moriarty said. “We have been inclusive with the LGBT community in the past, so it’s not an issue on that score, and the responses that I have gotten to date have been just about universally supportive and thankful.”

John Riley is the local news reporter for Metro Weekly. He can be reached at jriley@metroweekly.com
← Previous Story Cast of “Transparent” releases PSA in support of Gavin Grimm
Next Story → Over 700 New Yorkers have changed their gender on vital records following rule change