WNO’s Champion is a knockout (Review)

Another contemporary opera following fast on the heels of Dead Man Walking, Terence Blanchard’s Champion continues the fascinating conversation on today’s opera. It’s a great choice for two reasons. First, like Dead Man, it shows that modern opera doesn’t have to be a discordant concept-piece. Like the best of traditional opera, it can tell a compelling, deeply enthralling story. But Champion is also a brilliant choice because it sits in fascinating contrast to Dead Man. It is, quite simply, a very different animal.

Whereas Jake Heggie’s opera is dialogue-rich and engaged in a real-time narrative, Champion (★★★★) tells its (also true) story of boxer Emile Griffith with greater flights of expressive fancy. The good news is that it’s no less accessible. In a wonderful moment, for example, when we first meet the young Emile, he arrives by way of a mini-spectacle of song and dance suggesting a street festival in his home in the U.S. Virgin Islands. It tells us much of what we need to know about this young man’s optimism and also his innocence. Later, scenes are often introduced by a boxing ring announcer with the words “And in this corner.” This, too, works. It is our invitation to have a look, consider the contender, decide to cheer or boo, be it Emile as a young boy, young man or in old age.

But, like Dead Man, Champion is more than just a recounting of real-life events. As Emile’s career as a boxer takes off, we learn that he is far more complicated than his winning smile and determined boxing shows. He frequents a gay bar — no small thing in the late mid-century when gay rights were anything but established. As time goes by, and despite a marrying a woman, he continues to struggle to know who he is and what he wants. The equation grows even more complex when he plays a role in the death of an opponent, Benny Paret. As he finally contemplates the human cost of his professional life, he is as much a victim as the men he has beaten senseless in the ring.

The themes and questions are deeply interesting. Even if times have changed, pressures obviously still remain for LGBTQ people, especially in the sports world. Many grapple with the contradictions inherent in contact sports. And everyone can relate to the weight of expectations, the crossroads we all face without a roadmap.

Carrying this story is Blanchard’s extraordinarily powerful and creative score. An unfettered blend of opera, jazz and African-influenced percussion, it is exciting simply to experience it. But it’s also an ideal vehicle in which to carry his story and its powerful themes. What could be better than a building powerhouse of drumbeats to suggest the pressure and violence of the boxing ring? What better than a driving jazz undercurrent to suggest the intensity and color of city life? Paired with Greg Emetaz’s stunning, vintage-style projections — especially the boxers in all their grit, glory and physical beauty — the entirety is enthralling and evocative.

Which brings us to an interesting dilemma of Champion. So much of it is about the physicality of the boxers and its sensual connection to Emile’s unfulfilled erotic needs, finding singers who can convincingly carry the roles is no small challenge. Here, the issue is utterly moot, since Aubrey Allicock is so exquisitely convincing as the young boxer. A stocky, super-fit steamroller, he is a joy to watch. But Allicock is a subtle actor and he sees the appeal in showing the gentleness in Emile. If he convinces more when dancing with Sadie, his future wife (played and sung with effective understatement by Leah Hawkins), than with the man he meets later in a bar, it’s not the end of the world.

An unfettered blend of opera, jazz and African-influenced percussion, it is exciting simply to experience Blanchard’s extraordinarily powerful and creative score.

Another unevenness is Emile’s relationship with his mother, Emelda Griffith. While it doesn’t get any better than having the magnificent Denyce Graves gracing the role, there is something unmet in their interactions. She abandoned him when he was a child, so where is his anger and sadness? If the splendid tones of her mezzo-soprano at first sound a little incongruous as they ride the jazz, her aria “The sea ain’t got no back door” — sung to a solo bass — is truly sublime. Other standouts here are Arthur Woodley, singing the elderly Emile with winsome expressiveness and Samuel Schultz who did a stellar job with the role of Emile’s manager Howie, on behalf of an ill Wayne Tigges. In smaller roles, tenor Frederick Ballentine sings beautifully and is exceptional as Luis Griffith, the elderly Emile’s caregiver, while Samuel Grace is quietly effective and delivers his gorgeously melancholy treble soprano with much presence.

With highlights such as these, there is every reason to see Champion. But prepare for one or two caveats. Not every transition between the genres works as smoothly as it could (Emelda’s entrance in a comically cardboard car is a case in point). Even more problematic are the penultimate moments of the opera, when Blanchard brings the full cast onto the stage to join the elderly Emile as he comes to terms with his younger selves. It may be intended as a grand “requiem style” reckoning, but the libretto and music teeter too close to the trite. That said, this opera still comes out swinging — and you’ll want to be ringside. 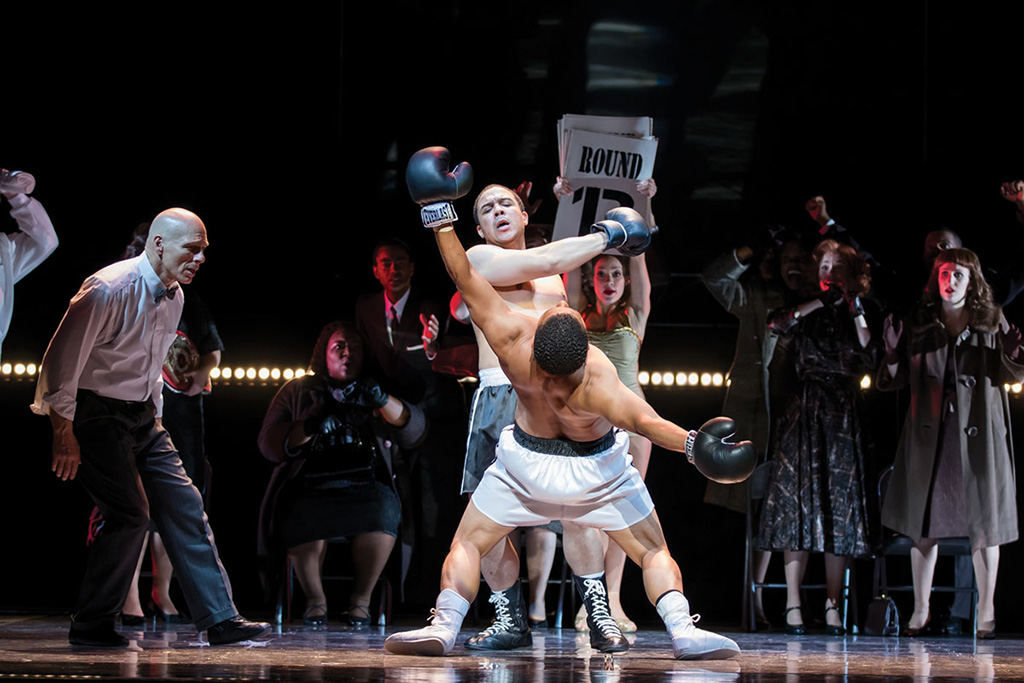