Blood Knot (★★★), the groundbreaking ’60s drama by white South African playwright, actor, director, and activist Athol Fugard, never loses sight of its main target: the broken system that was Apartheid. Training a sharp eye on the institutionalized oppression and racism that ruled his native country, Fugard, son of an Afrikaner mother and an Irish father, spells out early via dialogue the play’s intent to deconstruct the “insult, injury, and inhumanity” inflicted upon the black population by their nation and countrymen.

Each of those three facets of subjugation is given moving expression in the story of two brothers, Zachariah (Nathan Hinton), dark-skinned and considered “black,” and Morris (Tom Story), light-skinned enough to pass for white yet indisputably “colored” according to the strict codes of Apartheid. Sons of different fathers, Zach and Morris were born of the same black mother. Yet their world sees and treats them differently enough that Morris was able to live on his own in the city, passing for white for months, before his sense of familial solidarity compelled him to return to share a shantytown shack with his illiterate, financially strapped black brother.

Their evenings now are spent with Morris bathing Zach’s sore and blistered feet as they catch each other up on the routine tidings of Zach’s day working as a gate-guard posted to keep blacks out of a whites-only park. The brothers, one a long-term dreamer, the other rashly impulsive, also swap wildly divergent memories of their mother and childhood. Surrounded by the clutter of their cramped shack, where the bed sits propped up on cinderblocks and waste water is poured down a hole in the ground, the brothers’ lives — and the play’s action — feel hermetically sealed inside their one-room abode.

Director Joy Zinoman’s circumscribed staging virtually erases the teeming slum just outside their door so that the brothers’ dynamic symbiosis fills the space. Jostling around like hamsters in a cage, their obvious confinement and sporadic bursts of anxious, pent-up energy capture the tedium of their hardscrabble existence, perhaps all too well. Quiet and isolation hang heavily over much of Morris and Zach’s dimly lit two-man show.

Their lives and the drama perk up once Zach declares he wants a woman — even though he hasn’t a clue how he’ll land one. Morris, ever the creative thinker, suggests Zach connect with a charming lady through a personals ad in the classifieds section of the city paper. With help from Morris, Zach follows through and pretty soon finds himself involved with an eager pen-pal, whom he then learns, to his delight, is a white woman.

He seems slow to recognize that the very idea of corresponding with a white woman represents a violation of the social order that could lead to harsh, even devastating reprisals, but Zinoman’s direction rightly emphasizes the point. The depiction of Apartheid in South Africa persuasively highlights similarities to racial segregation everywhere, especially in the Jim Crow South, where Emmett Till’s alleged transgression against one white woman and thus somehow all of white society resulted in his murder.

In a logical development of that theme, Blood Knot‘s plot comes to hinge on Zach’s bright idea to have light-skinned Morris, posing as Zach, attempt to pass for white in order to meet the smitten lady pen-pal. It’s a dark, dark joke, but it makes sense that the brother most oppressed might derive the greater thrill from subverting a society brutally and rigidly codified by skin color and race. Hinton, who at times pushes Zach’s inability to read or write towards a frustrating simple-mindedness, does well to capture the man’s rare moments of ingenuity. Still, his inner life stays mostly hidden.

From the time of its debut, in which Fugard portrayed Morris, opposite his esteemed collaborator, the late, great South African actor, Zakes Mokae, as Zachariah — the play traditionally has been performed with a white actor taking on the role of Morris. This production is no exception, and so the story’s passing into passing behooves Tom Story‘s balancing act of passing as a “colored” brother who could pass for white, yet has felt the vicious sting of racial hatred. Added to those unfolding layers of identity, both actors don accents that, while consistent, sound distractingly unnatural. And whatever essential, intangible transformation Story manages in illustrating a “colored” man who lives as black while able to pass for white, he still comes up short in that department.

Morris and Zach don’t register as blood brothas, which misses the point but perhaps not entirely. One of the show’s surest insights about the country’s then-ruling minority (“This whiteness of theirs isn’t in the skin”) is applicable to practically any cultural reading of racial differences. Zach and Morris don’t have to be brothers, except at heart. As long as the devotion and empathy are there, they could be cousins, lovers, or any co-dependent couple riding a pendulum that swings between affection and resentment. Blood Knot‘s journey to that revelation is a slow and bumpy ride. 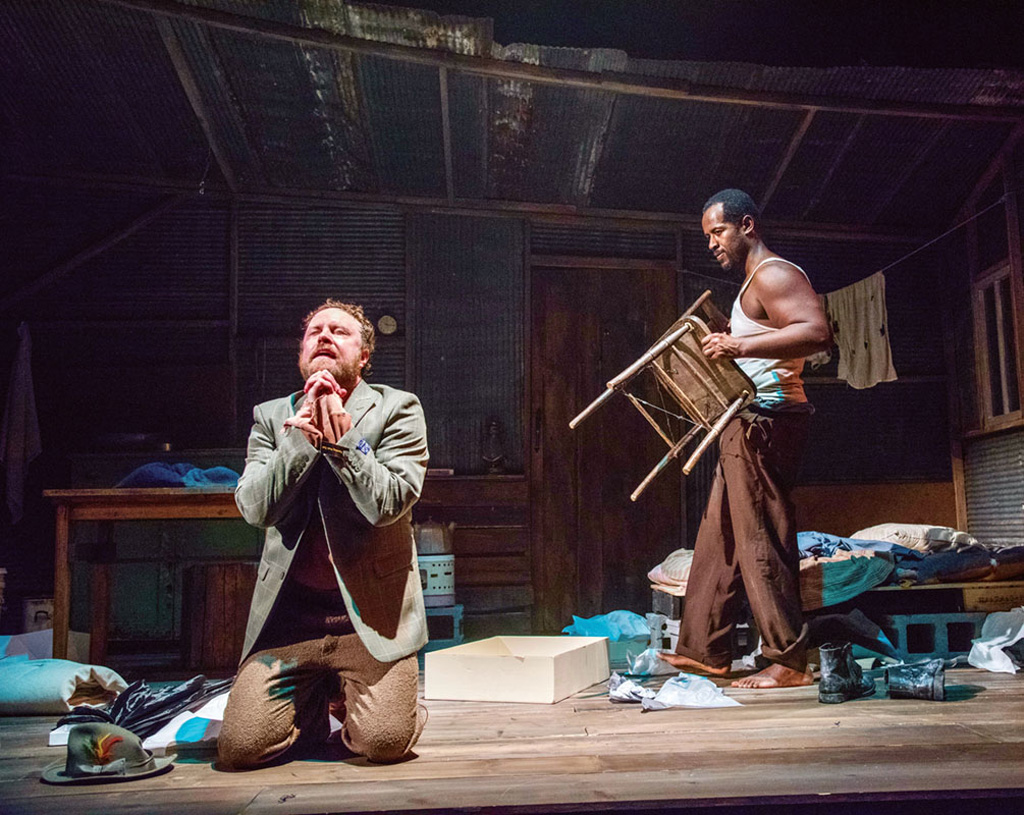